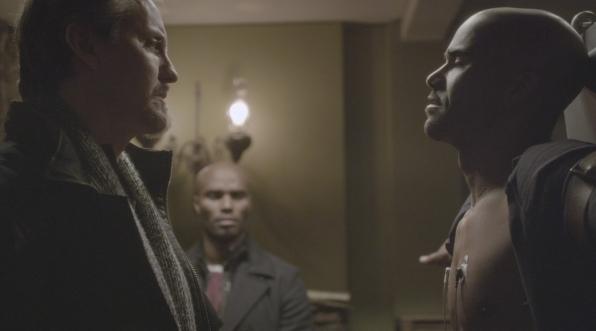 Tonight’s Criminal Minds is a big one for star Shemar Moore. His character’s been abducted and it’s up to the BAU to find him. Even the title of this episode is named after his character. It looks like “Derek” is going to be emotional with a capital E.

Derek’s definitely in for a world of pain and to help him rise above the intensity, he disassociates himself from the situation and in his mind, he goes to a better place. A place where he meets up with his dad played by The Danny Glover.

A couple of actors are set to play younger versions of Derek Morgan so expect to learn more about the profiler’s past. Flashbacks — or flashes of his past — are in order.

Directing this very special episode is Moore’s CM co-star, Thomas Gibson. Also, guest starring in this episode is Mistresses‘ Rochelle Aytes who, of course, plays Derek’s girlfriend Savannah. And Charles Mesure is one of the bad guys responsible for kidnapping Derek. You may recognize Mesure from V the Series. He was also Black Beard on Once Upon a Time. He currently recurs on Bravo’s Girlfriends Guide to Divorce as Phoebe’s ex, Ralf. He also is The Beast on Syfy’s new hit series, The Magicians.

Our VIDEO of the day features Derek finding out who this man he’s seeing in his mind really is: