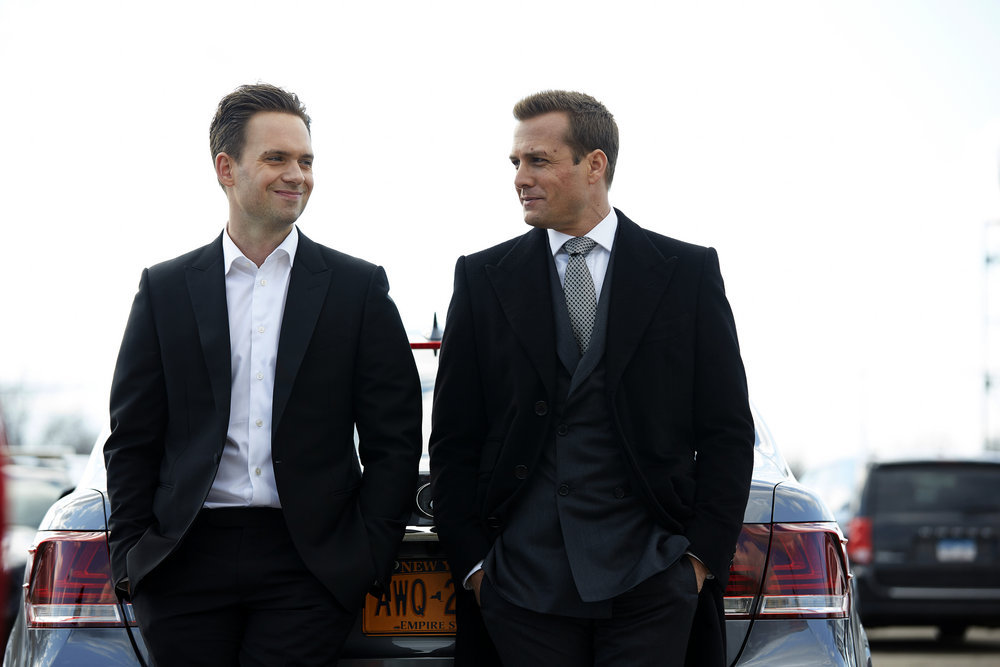 This is it. The fifth season of USA Network’s hit series Suits ends tonight. So what’s it going to be? Is Mike really going to take a deal to save his friends? He’ll go to prison as long as nothing happens to Harvey, Jessica or Louis? Will Harvey make it in time to stop this madness?

Whatever goes down someone’s going to get hurt, right? Preferably we’d like it to be that barracuda, Anita Gibbs. She’s good. But she’s heartless. And, yes, Mike and everyone are doing what they need to in order to prevent any collateral damage. Can they squeeze out of this predicament without that happening?

These final episodes of Suits Season 5 have been intense, emotional and stress-inducing. Has anyone developed any ulcers yet? I’m still recovering from that amazing scene between Donna and Harvey — the have faith in yourselves scene, the one where Donna tells Harvey he’s worthy. Because you know that Harvey probably thinks he’s not. More on that scene in just a bit.

What’s transpired as of late has been a case study for how far people will go to protect their friends, protect themselves and it’s shown what these characters are made of when their backs are against the wall.

Mike knows what he has to do so his friends will escape from this desperate situation unscathed. Harvey shows he’s relentless one second (humiliating Rachel was hard to take) and then the next second he shows himself to be the bigger man. For example, he knows he needs to back down to present the best case possible and lets Mike take over as lead counsel. Meanwhile, every urge Louis is feeling is for self-preservation. But he also knows what’s going to happen should he pull the trigger on the recording he made of Harvey admitting he hired a fraud.

The women in their lives — Jessica, Donna, Rachel and even Gretchen — just want these men to have faith. They feel Harvey and Mike did a good enough job to sway a jury. And if not sway, then at the very least, create reasonable doubt. They feel they did enough to win. But the guys aren’t sure. These guys who are supremely confident in almost every aspect of their lives are experiencing a massive amount of doubt because the stakes are so high.

The lawyers of Pearson Specter Litt have countered every single manipulative move that Anita Gibbs has so ruthlessly — and ceaselessly — unleashed. But is it enough? We know Mike is already in Gibbs’ office saying he’d like to take her up on one of the two deals they’ve talked about. Will he have time to go through with it?

Until we find out, I’m simply going to have that emotional Harvey / Donna scene in “Tick Tock” on repeat. Harvey doesn’t want Mike to go down for this. He doesn’t want Jessica and Louis to take the fall. He’s always had this code he lives by and loyalty is at the top of the list. He shows up at Donna’s apartment because he says he wants to turn himself in. Donna’s not about to let that happen.

Donna: Don’t do it. Don’t fall on your sword again.
Harvey: I have to.
Donna: No, you don’t.
Harvey: We might not win.
Donna: You don’t always have to be the hero.
Harvey: That’s not why I’m doing it.
Donna: Then why the hell are you doing it?
Harvey: Because. It’s my goddamn fault!
Donna: No, Harvey, it’s not. It’s MIke’s fault just as much as it is yours.
Harvey: Then why should I be the one to throw him under the bus?
Donna: Don’t you get it? I am not asking you to throw him under the bus. I’m asking you to believe that the two of you are worthy of being found innocent.
Harvey: What if I can’t do that?
Donna: Then you can march yourself down to Gibbs’ office in the morning and turn yourself in. But I don’t want you to do that.
Harvey: Why not?
Donna: Because I think you’re worthy. And I don’t want to lose you. Harvey, go to the courthouse in the morning, sit with Mike until that verdict comes in and show him that you have faith in him. Like I have faith in you.

Why is it so hard to hear someone tell you that you’re worthy? Man, I need Harvey and Donna to be together someday. I just do. But that’s not what this show is about — especially right now. They’ve got to figure out this devastating issue that’s been relevant since day one of the series.

As Mike’s day of reckoning draws near, it threatens to shatter the lives of those closest to him. Faced with the uncertain outcome of his court battle, Mike makes the one play he has left.

Clip 1: Katrina (guest star Amanda Schull of Syfy’s 12 Monkeys) is back! But when she and Louis meet up, things aren’t so rosy. She’s not happy with her former boss. With good reason.

Clip 2: Harvey talks to Gloria Danner (guest star Donzaleigh Abernathy), who fills him on a few not-so-pretty details about prison life. She needs him to warn Harvey.

The Harvey-Mike relationship has been the cornerstone of this entire series. These two have been through so much together. They know each other so well. Which one is going to succeed in taking the bullet for the other? Or will they be forced to see someone else go down for the decisions that they made? We’ll find out soon. The Season 5 finale of Suits airs on USA Network tonight at 10/9c.