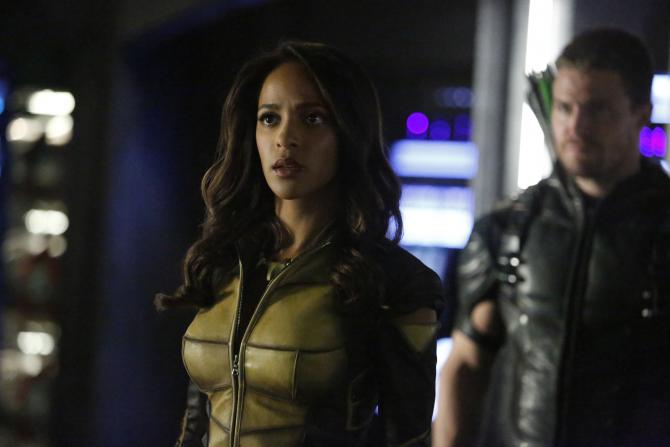 One of my favorite things about the Arrowverse is how it has put a new twist on the familiar. We’ve seen it in character creation like John Diggle and Felicity Smoak, and in making the world more diverse. For example, Joe, Iris, and Wally West are African-American (and Jimmy Olsen, too!). Another area that shines is in its crossovers.

This week, Superheroes on TV explores some all around Guest Star Goodness; especially with the live-action introduction of Vixen on Arrow.

“We had an animated encounter,” Oliver says of Mari when he introduces her to Team Arrow at the beginning of “Taken.” There is no shortage of important women on Arrow, but it is so wonderful to actually see a Black, female superhero that is not Storm. Vixen and Green Arrow have a great rapport and it’s easy to see how they could call upon each other for help in the future.

Megalyn Echikunwoke, who also voices the animated Vixen, has really made this role her own. Even though this is her first (real) introduction, it is easy to see that this is not her first rodeo. There’s no awkward “ah-ha” moment where she realizes she’s pretty great. Vixen comes in, helps out, passes Oliver some sound advice, and gets on with her own life. OK, OK, so parts of the animal totems did seem a bit cheesy, how cool was it to see her pull Oliver up through a window with just one arm? Arrow is not the show where we normally get to see actual superpowers, so it was nice to see Vixen bring her unique brand of bad assery to the city.

While it’s sad there are no hidden promises or Easter eggs that hint at her return, I very much hope they don’t waste this opportunity. In the comics, her backstory is peppered with all sorts of Justice League teams ups, and there was a time where she’d helped the Birds of Prey. There’s no telling if the CW is considering upgrading Vixen from animation to live action, but even if she doesn’t get her own series, there’s plenty of room in this world for much more Mari McCabe!

While Oliver et. al are trying to best Damien Darhk in Star City, Diggle and Lyla were in Central City trying to help Barry rid the city of a killer shark. Now, King Shark is definitely one of the cheesier characters in DC’s grab bag, but as we’d seen earlier in The Flash, this is one scary shark.

Diggle and Lyla are in town because this is her first major hiccup after stepping into Amanda Waller’s shoes as the head of A.R.G.U.S. As our characters work together to figure out how to catch King Shark, the episode is littered with hat tips to Jaws and moments of brevity where Dig is still in awe of Barry’s speed. As serious as Dig has become on Arrow, it’s nice to see him lighten up a bit. He may not be Spartan in Central City, but he’s still a voice of reason, even for Barry. Dig is consistently around to keep our heroes grounded.

As we fast-forward to the year 2046 on Legends of Tomorrow, our time travelers have been temporarily stranded in a version of Star City that none of them recognize. An army of Deathstrokes controls the city and the criminal element has run amok. Yet, when a hooded hero rises, everyone is surprised that it is not Oliver.

For the first time since this show has aired, I was quite pleasantly surprised and excited about this episode. Though I can’t help but wonder if that’s because it takes place in Star City and is very Oliver Queen centric… At any rate, when the new Green Lantern revealed himself to be the son of John Diggle (played by Joseph David-Jones), yet he called himself Connor Hawke, my inner geek came leaping out of me! Connor Hawke is the son of Oliver Queen who took up the mantle after Oliver stepped aside — at least where the comics are concerned.

And again, I love that the writers have taken the familiar and given us a wonderful twist. This kind of creativity gives these shows the power to work within decades of comic history while leaving room for a modern interpretation. We’ve always known that Oliver had a son, and we’ve known that his son also becomes the Green Arrow. So while I’m not sure what is really going to happen, this version of 2046 is not set in stone, afterall, it was really fun to see that iconic goatee under the hood along with a fresh spin on Connor Hawke.

After a week of fantastic guest spots, both The Flash and Arrow are on hiatus until March 22nd and 23rd, respectively. But, DC’s Legends of Tomorrow returns with an all new episode on Thursday at 8/7c on The CW.

It Was So Good To See You (Week of February 7th)