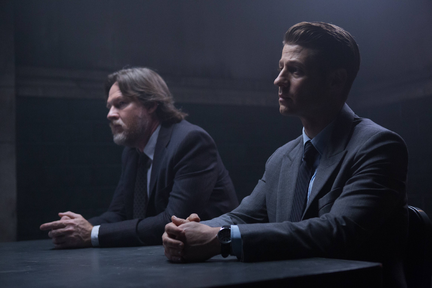 Gotham returns tonight after a lengthy hiatus. In this second half of the season, it’s no longer about the Rise of the Villains. Get ready for the Wrath of the Villains. First up: we’re introduced to a couple new bad guys: Victor Fries a.k.a. Mr. Freeze and Dr. Hugo Strange.

-Jim has to answer for the events that went down in the midseason finale. Even though he’s back on the job, has Captain Barnes lost faith in his best detective?

-There’s a chilling new case in town. Jim and Harvey are on the case. Here’s a clip:

-Now that Oswald/The Penguin is, well, distracted with some urgent issues keeping him from ruling the world (see above), who’s the new king of Gotham? You’ll be surprised to find out.