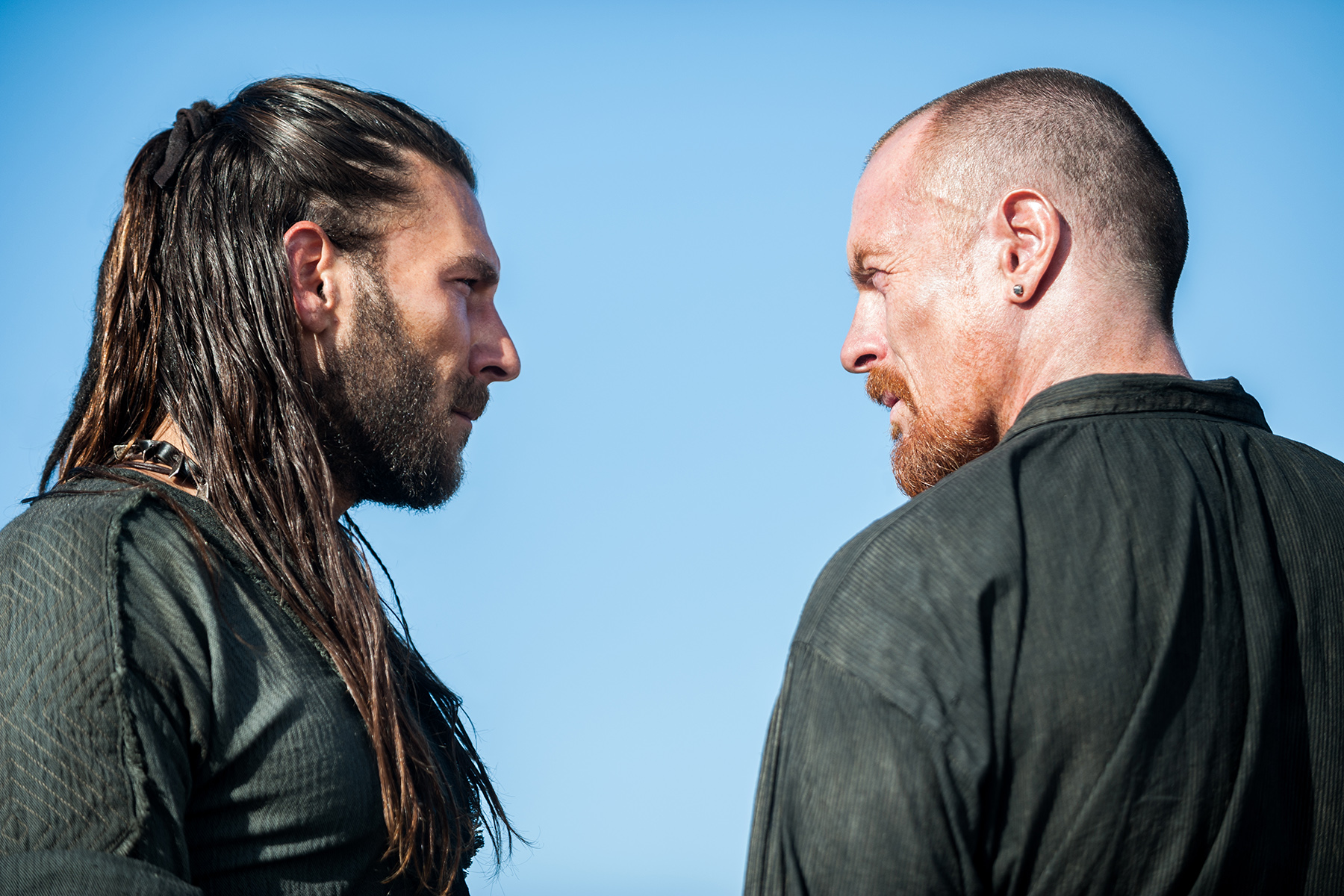 It has always been easy to love the fast thinking, con-artist side of John Silver. Now it’s become a treat to watch vulnerable John Silver open up to people and share a little honesty. Madi has brought out a far more complex and stronger Silver. He still views help as charity, but her regal demeanor and firm words seem to finally have broken through to him. When he confesses that Flint is his burden — not the crew — we can see that death is what frightens him most. For someone who has always done what was necessary to survive, it makes sense that he’s scared of linking himself to another person who only brings death.

I would be very happy if this is the last of woe-is-me Silver. Yes, I understand that he’s lost his leg and doesn’t want to be seen as weak, but his energy would be better served if he were back to his strong manipulation game. It’s time Silver get back to being the angel and devil on Flint’s shoulders.

Captain Flint carries himself with such a braggadocious swagger that he can move mountains. Mr. Scott even told his daughter Madi that “Those men rose to their stations because they are peerless when it comes to shaping the world to their will.” I am constantly amazed at the sheer power that Flint’s words carry; and I am equally impressed at Mr. Scott’s breadth of knowledge about the inner workings of this region. Though perhaps I shouldn’t be at this point because those qualities are what make these characters so wonderful.

When Flint’s words have taken him as far as they can, he’s not afraid to get his hands dirty. The duel between him and Teach really had me worried. It takes a special kind of stubborn to walk into a fight knowing you are outmatched. But it also pays to have allies, even when you don’t always see eye-to-eye. After Vane stopped Teach from killing Flint, I expected a long and drawn out death match. Yet it was somehow far more appropriate for the cold shoulder conclusion.

Black Sails has done an excellent job at breathing new life into the unrequited love trope. Teach was willing to forgive past transgressions — acts that were so heinous, they resulted in him being thrown off Nassau — because he wanted so badly for Vane to embrace the role he’d imagined for him. It doesn’t matter how badly someone wants something for you if you don’t want it for yourself. That was the second time Vane had chosen someone else over him. For Vane’s sake, I hope there isn’t a third time because I don’t think he’d live to tell the tale.

So what was it that made Vane turn on Teach a second time? Was Flint really able to persuade him based on his plan for the island? Or is this all because Vane finally had found something (or someone?) worth fighting and possibly dying for? Flint and Vane are better together. The sooner they realize it, the sooner they can stop wondering when one will stab the other in the back so that they can truly get some work done. Again, Mr. Scott’s wisdom is apropos in the sense that strong willed personalities need a common enemy to unit against, or they’ll turn on each other.

Woodes Rodgers is trying, and for that I want to be on his side. Plus, he’s got this unassuming charm about him and a way with words that makes him easy to like. But my inner pirate won’t let me fully invest. I’m 100% on Jack’s side here. As selfish and self-serving as his plan is, I can understand the motivation behind it. Jack and Flint are quite similar with regard to they both had plans for Nassau, yet some outsider was able to come in and accomplish all they (thought) desired in far less time. I’d be seething as well, with nothing but vengeance on my mind.

So here we are again. After all the double crosses and two and a half seasons of alliance building and backstabbing, the good pirates all need the same thing to win: money. Jack has no allies but holds all the cards since Anne Bonny has the cache. Flint has Vane but no fleet to swell his numbers to help retake the island. How are they going to make this work?

There are only four episodes left. What better time to speculate about what’s to come? Here are some of my theories:

As much as I like Rodgers, I’d still love to see Max come out on top. She’s proven time and time again that she is every bit as cunning as these captains and that she will not wait for things to be given to her when she is perfectly capably of taking them for herself.

There’s only one way to know how it all plays out. Be sure to watch Black Sails on Saturday at 9/8c on Starz.