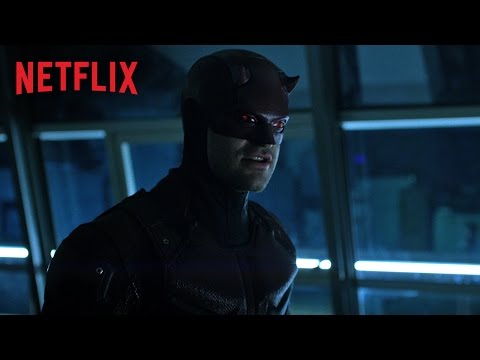 Where the first trailer went heavy on the Punisher (Jon Bernthal), the second part features more Elektra as well as the (super)villainous organization known as The Hand. It’s also clear that Foggy still isn’t completely okay with knowing what his best friend does and who he is. So that friendship looks like it’s going to continue to have issues. Plus, much like Part One, there’s a minimal amount of Rosario Dawson, so the question becomes how much of a presence is she going to have in Season 2? Especially knowing her character — Claire Temple — will play significantly in Netflix’s upcoming Marvel’s Luke Cage series.

Just when Matt thinks he is bringing order back to the city, new forces are rising in Hellâ€™s Kitchen. Now the Man Without Fear must take on a new adversary in Frank Castle and face an old flame â€“ Elektra Natchios.

Look for the dark second season of Marvel’s Daredevil to drop March 18, with 13 one-hour episodes.

Burn Notice “Damned If You Do” Preview (VIDEO)