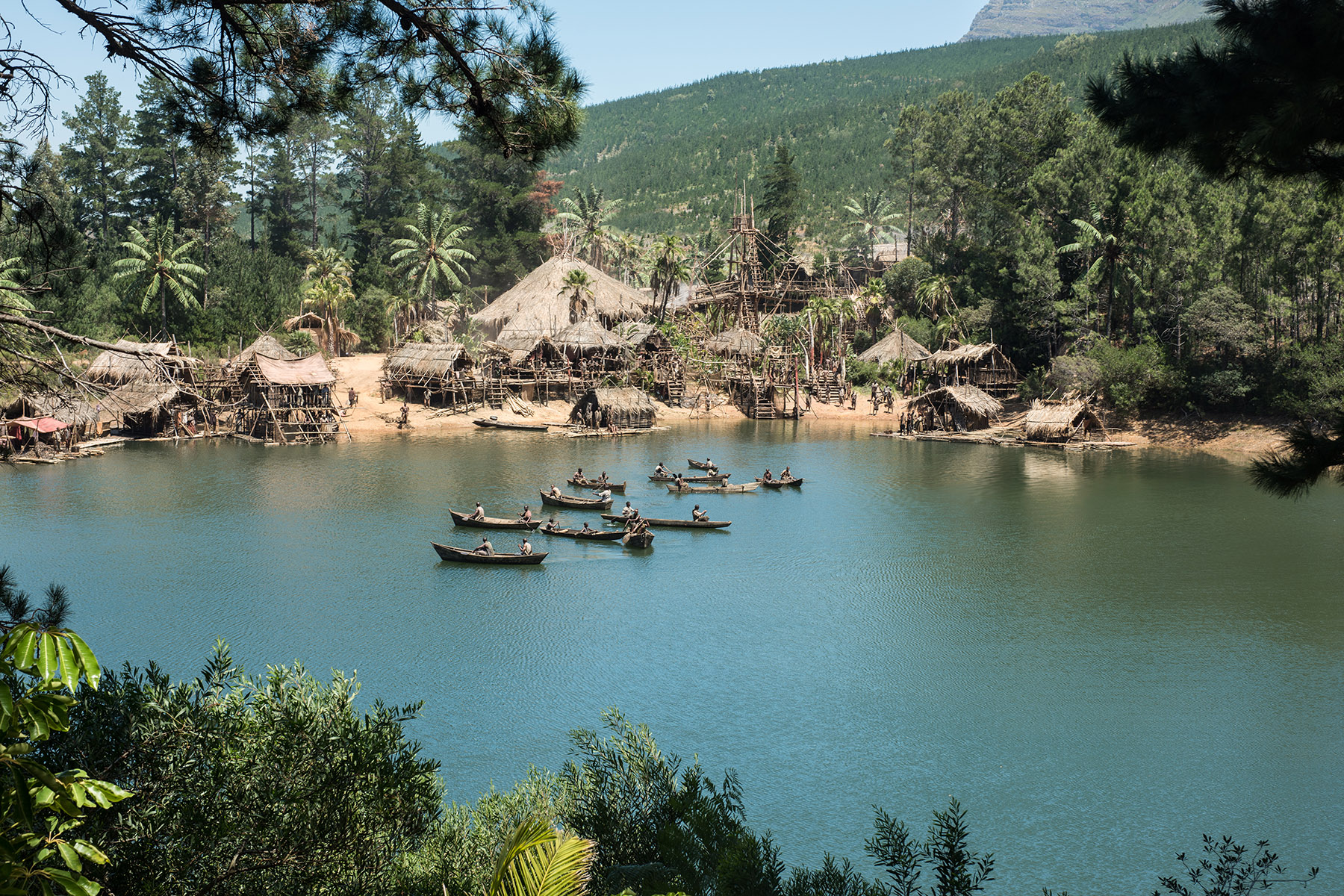 Black Sails is hitting its stride quite nicely in their third season. In “XXII,” we’re ramping up for what is sure to be another thrilling season. Abandon all hope those who yet to watch the episode, because there are MAJOR spoilers ahead!

From the opening scene of the camera just above the waterline as we look out onto the horizon, to the sweeping cinematics as we see the Maroon camp for the first time — the scenery this week was phenomenal!

After the crew of the Walrus is captured by Maroons (as Flint calls them), we get to walk through a lush, jungle landscape as the crew is taken to the Queen of this island of misfits and survivors. The beauty and awe of this new island slowly gives way to more sinister happenings, and all along the way, I’m still ready to book a trip. We discover deadly traps, cages, and a civilized but hostile populace. From the hard sand beneath their feet, to the chains that bind them, to the catwalk above them; there is no question that this place has a gorgeous exterior but packs a wallop once you’ve unwrapped it.

We’ve been to many different locations in our three seasons of Black Sails, and this Maroon Island has a unique landscape and its own routine. The locals don’t speak much and the silence perfectly allows for the visual gift we have been given.

Mr. Scott and the Maroons

I’ve always loved the character of Mr. Scott, and have felt like he has been underutilized of late. Throughout all the regimes that Nassau has seen, he’s been an integral part of each. Organizing the slaves, being the voice of reason to an oftentimes unreasonable bunch, and managing to lead a secret life as leader of the Maroons! WHAT?!

The people on the beautiful island mentioned above call Mr. Scott their “King.” I was shocked! It just goes to show that in a place like Nassau you can’t assume anything about anyone. Though, in hindsight, Mr. Scott’s background certainly helps to explain his diplomacy. He can look leaders like Eleanor or Hornigold in the face and play the ally card, all the while working in the background to serve his own needs. An admirable trait on an island of cutthroats.

Yet just as we get excited at the prospect of Mr. Scott as the King of the Maroons, he is shot by the British as he tries to help two boatloads of slaves escape the island. Why now?! Why after so much time and potential would he have worked so hard only to be shot by two random guards on patrol?! This can’t be the end of Mr. Scott. I refuse to believe that we have been given this wonderful surprise only for the character to be taken away so carelessly. This was most certainly my jaw dropping moment from “XXII.”

Vane, Blackbeard, and the Fire Ship

Charles Vane is a survivor if there ever was one. The entire island, even Jack’s crew, has turned on Vane in the hopes of collecting that 10,000 bounty. Though not all is lost because Jack and Anne won’t let their former Captain be bested by hooligans. It is also apparent that Teach won’t leave Vane hanging either. After some well placed explosive at the fort, one entire wall is blown out to make way for Vane’s escape. While he gets a wide berth from some pirates as he makes his way to the beach, there are a handful that make their presence known.

When Teach shows up to help Vane get off dry land, they begin plotting their escape from the island altogether. After agreeing to leave with Teach (in episode “XX”) in exchange for his ships guarding the bay, the feared Blackbeard has come to collect what he is owed. However, Teach and his crew are out gunned and cannot simply battle past the British blockade.

Their plan is to launch a fire ship (yes, fire ship) at the blockade to break the formation. They aren’t even sure if it will work, nor are they sure it will provide enough distraction for them to escape. But oh what a sight it is to watch this play out! Chalk this entire sequence up to the great cinematography mentioned previously, because I’ve never seen a ship burn quite like that one.

– The new symbiotic relationship between Flint and Silver: Finally upfront about their intentions, there’s no telling how much these two can get done with they actually work together toward a common goal. Can’t wait to see how this unfolds!
– The (not so platonic) relationship between Rodgers and Eleanor: I keep waiting for the double-cross. Someone’s got something up their sleeve, but who has the upper hand and what their actual intentions are still remain a mystery. The tension here is what keeps me interested.

What does Starz have in store for us next week? You’ll have to come back next Saturday, February 20th, at 9/8c as the Black Sails adventure continues.

Love Finds You in Valentine Preview

Breaking It All Down, The Originals “Girl in New Orleans”