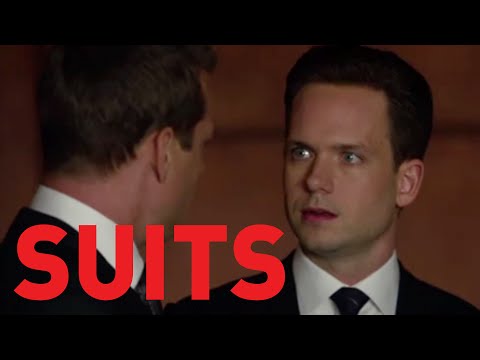 After last week’s Suits, we now know who outed Mike Ross and is responsible for giving Pearson Specter Litt plenty of reasons to panic.

The conversation between Louis and his former fiancee didn’t go the way everyone wanted to at all. By the end of “Live to Fight,” there was no more anonymous label on Sheila. She stepped forward and gave Anita Gibbs the ammunition to bring down Mike and PSL.

Which brings us to tonight’s episode: “God’s Green Earth.”

Official Synopsis for “God’s Green Earth”: With time running out before Mike’s case goes to trial, Harvey and Mike are at odds over their strategy, and just what lengths they’ll go to in order to defeat Gibbs.

Looking at the photos released for “God’s Green Earth,” Scottie makes another appearance, which we all knew was going to happen. She and Harvey still have some things to hash out. Plus, she could be the person to put another nail in PSL’s coffin.

But her presence has us thinking, what does Scottie mean to Harvey in the grand scheme of things? Is she the one that got away? Was their relationship perfect on paper, but doomed to never fully be realized? Is she the love of his life? Or would that be Donna potentially? Or is the love of Harvey’s life, the law? Or even his law firm? Would love to know everyone’s thoughts on Scottie and basically Harvey’s love life in general.

As for Mike, it seems like Gibbs doesn’t want to send him to jail. She’s out for the bigger fish, Harvey and Jessica. But it’s always great how Mike can come up with the perfect counter to almost anyone’s machinations, moves and maneuvers. And if he sees Rachel threatened, like she may be in “God’s Green Earth,” who knows whatÂ he’ll do. But you know he’ll try and do something.

Now that we know Sheila has come forward, what kind of Louis are we going to see? Will he try to see her again and make another plea? Will he go on the offense and try to figure out how to discredit her? Or will he dig in deep and try to help the team out of this mess another way? What will his next contribution be?

Guess we’ll find out when Suits airs tonight at 10/9c on USA Network.

Betrayal Comes From All Sides, Arrow "Sins of the Father"