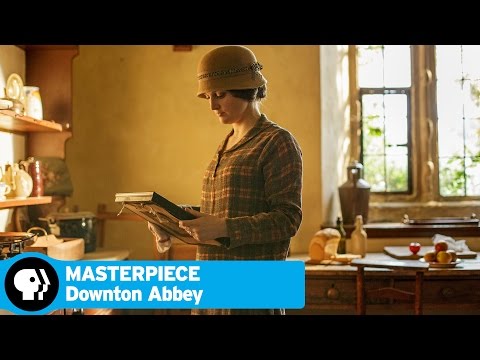 I canâ€™t be the only one who was a bit horrified by the violent turn that dinner took last week. I mean, it seemed a tad dramatic â€” Robert spitting blood over Cora, himself, the table, the floor and everyone who tried to help him. But heâ€™d been ignoring his health for a while, so it wasnâ€™t completely shocking to see his body rebel against him like that. I did get worried for a minute because it looked serious, it was serious. In all honesty, Iâ€™m not sure I wouldâ€™ve been able to forgive the writers if Robert had actually gone out like that.

In addition to the possibility of watching her father die, Mary got another shock. Or, maybe itâ€™s more accurate to say her eyes have finally been opened in regards to Miss Marigold. She went on a bit of a fishing expedition with Anna to see if the servants have been gossiping, but Anna was wise to keep her mouth shut.

On a lighter note, I love that Violet isnâ€™t above a bit of blackmail to get what she wants. Things donâ€™t exactly go her way, but I love that sheâ€™s still so outspoken about her beliefs and willing to fight for them, even if Iâ€™m absolutely not on her side in this matter. And itâ€™s a good thing Miss Denker isnâ€™t afraid to use blackmail to get her own way either. I donâ€™t think the way she talked to Dr. Clarkson was appropriate, but do I think she deserved to be sacked? Of course not. And to be honest, I love her prickly relationship with Spratt. I wouldâ€™ve been sad to see her go.

â€œThereâ€™s so such thing as safe love.â€

Is it just me or has Tom become incredibly wise? I canâ€™t complain, especially since Iâ€™m so happy to see him back. I know he was loved and accepted as part of the family before his ill-advised relocation to America. But since heâ€™s been back, I have to say Iâ€™ve loved to see his relationship with Mary evolve. They seem to truly love and respect each other and heâ€™s one of the few people who Mary seems to listen to. I like that he feels he can be very direct and honest with her and that he’s doing what he can to help Mary realize it might be time to settle down again.

Edith seems ready to take the plunge, where Mary isnâ€™t. Well, is that true? Mary is being cautious and has told Tom she wonâ€™t marry below her station. But with Edith, I think sheâ€™s having a slightly hard time believing someone wants her. Sheâ€™s got a huge secret â€” Marigold â€” but Iâ€™m so desperate for her to find happiness in her personal life, especially since things seem to be going well at the magazine. Bertie’s great, so I want to see her give him a real chance.

Is it possible that Mrs. Patmore will find some happiness with Mr. Mason? Iâ€™m not too pleased with Daisyâ€™s reaction to that budding relationship, if thatâ€™s where itâ€™s going. I know sheâ€™s come to see Mr. Mason as a father figure. So if she cares for him that much, shouldnâ€™t she want to see him happy?

It might ask for too much, but would it be impossible to see Barrow happy? He’s been making friendly overtures towards Andy and getting absolutely nowhere until he realizes Andy can’t read. In order to help around the farm, which is what Andy’s true interest seems to be, he’ll have to learn how to read.Â Iâ€™m glad they were able to clear the air. Barrowâ€™s been such a sad sack lately that itâ€™s nice to see him get a bit of his spark back.

In â€œEpisode 6,â€ Barrow is encouraged to continue his job search, the Crawleys decide to open the house for charity and Daisy interferes in someone elseâ€™s affairs.

6 teases from the episode:

Superheroes on TV: Life in the Arrowverse