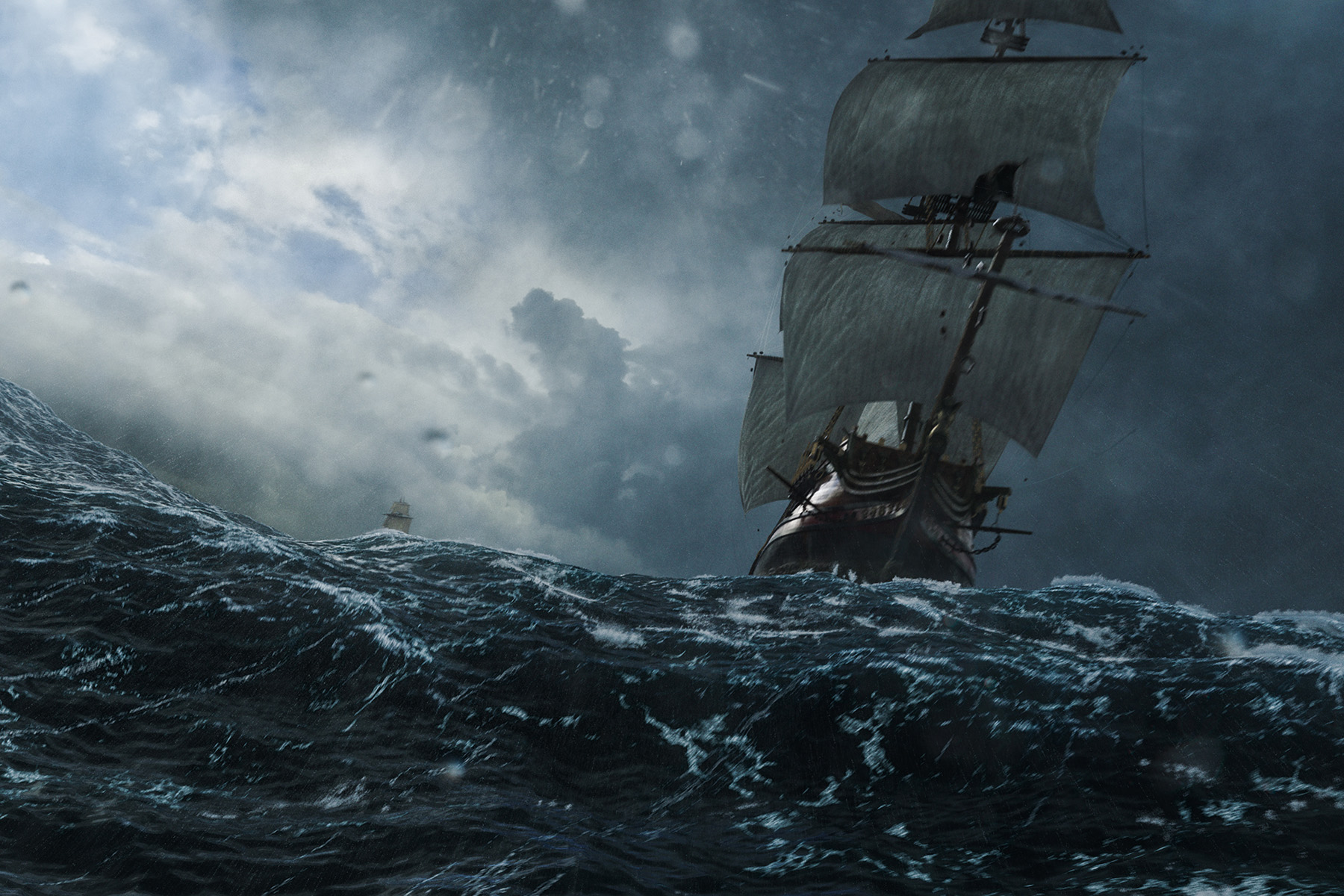 Is it possible for a weather event to steal the show? If so, the hurricane that Flint and the crew of the Walrus so foolishly rode into was an absolute masterpiece. Being on a 3-mast ship in the middle of that beast sounded (and looked) like the most awful place in the world to have been. Wind! Rain! A ship taking on water while the crew takes the beating of a lifetime! And how could anyone who has been watching since the first season not have been worried that Flint would, again, be the reason Billy is tossed overboard?!

In short, that storm sequence was magnificent.

Aside from the ferocious storm, this second episode of the third season slowed the pace so we could get a deeper look at both relationships of old and those forming anew.

With Flint rampaging through coastal towns, he sees Miranda in the faces of the dead women in his wake. And there’s no rest for the wicked because she haunts his dreams as well. He’s a man on a ledge; caught between the idea of what Nassau can be and the impending heavy hand of the British reclaiming what was once hers. Losing Miranda definitely tore something from him, and soon enough, his crew will have to pay for his actions.

We finally get some sincerity from Silver as he listens to a crewmate explain why everyone offers to help him despite his protests. He is having a hard time coming to terms with belonging to a group. It feels like realization has dawned that while he was once on board to serve only his needs, but now he makes decisions in everyone’s best interest. Will John Silver prove to be a team player after all? And if he does, will he have the stones to stand up to Flint when it matters most? Should he choose the latter, let’s hope he has a better fate than Mr. Gates.

Max has become a criminal mastermind, and it is so great to watch! An enterprising woman who refuses to let men with money decide her fate. Diversifying assets and making money easier to move are smart in these uncertain times. However, Jack seems completely resistant to the idea because his short-sightedness hangs on the idea that once the fort is rebuilt, they won’t have anything to worry about. But as an old player returns to the table, the balance in an already fragile Nassau is about to be upended.

Edward Teach is a man most feared; a pirate whose legend has men chomping at the bit to join his crew. On the rumor that there are no more Guthries in Nassau, Blackbeard himself makes his return. Was it just me, or was there something not quite right about that embrace between him and Vane? They share a rocky past that rips men’s friendships apart like nothing else can: a woman. Though it seems there are no hard feelings, Teach is highly disappointed with the state of the island. This is not the Nassau he once knew. He feels that by having brought prosperity to the masses, Vane et al. have weakened the very foundation that piracy was built upon. He prefers anger, competition, grit, and strife. “Strife makes men strong,” he tells Vane over drinks. He’d planned to be “head of a terrible fleet,” but now wonders if such a thing is possible given the state of Nassau.

Eleanor Guthrie is as adaptable as they come. No matter what situation she finds herself in, she always manages to find a way out. Will this new alliance with the Governor be an elaborate double cross so she can get back to her perch atop Nassau? Or has she, like Hornigold, turned against the place the she built? She appears to have always been a silver-tongued devil (and I mean that as a compliment), having turned all Teach’s allies against him when she was merely 17. How many men has Eleanor deposed? How many more will she pull the wool over to ensure she gets what she wants?

Next week’s Black Sails shows us the fate of the Walrus crew and gets back to politics as usual on the island. Tune into Starz at 10/9c to see what treachery unfolds!

The X-Files Preview: Mulder and Scully Meet the Were-Monster

The Last Ship â€œTwo Sailors Walk into a Barâ€