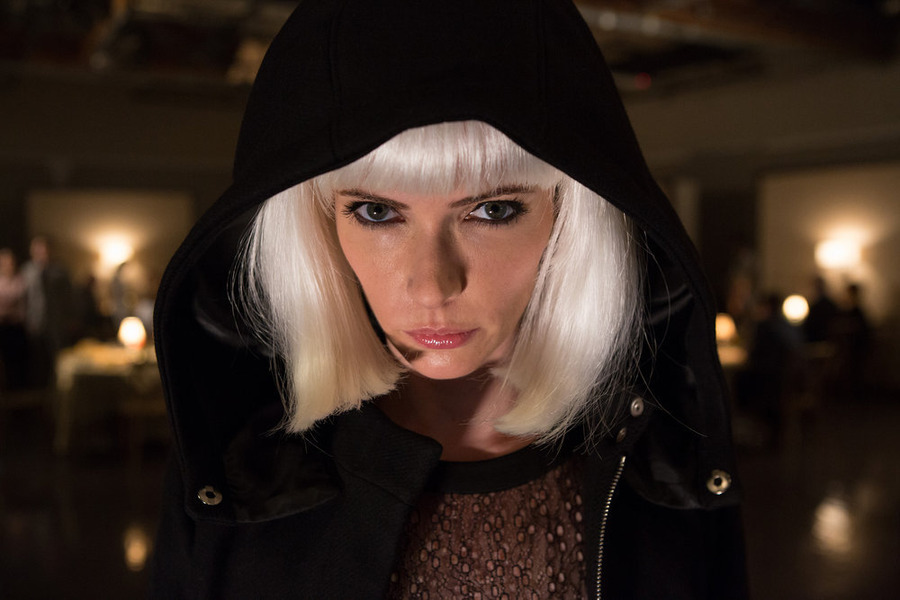 The long hiatus is finally over for NBC’s Grimm, which can only mean one thing. The “Eve of Destruction” is about to begin.

Yes, Juliette is gone. Not sure if this is a temporary state or something more permanent. But it’s time to see Eve in action. In a recent press call, Bitsie Tulloch admitted it was hard to say goodbye to Juliette.

“I had played her in various iterations, whether good or bad, for four years. So I knew I was going to miss her,” she said. “But, Iâ€™m having a blast with this new character, Eve. Itâ€™s really fun.”

It’s a role that requires a lot of stunts, the ability to embody a cold, emotionless persona, and the opportunity to don different wigs.

Taking on this challenge means she had to get physical while her character was off the Grimm canvas — she wasn’t featured in four episodes. “I started training way more heavily than I have before just to get really strong and [ate] a lot of protein. But in order to really sell that this is a new character, I had to do something physical.”

Psychologically, she says she had to adopt a certain mindset when it comes to this latest iteration. “It was really about having a complete disconnect from her old life and not even letting even a glimmer of emotion or anything like that, anything from her old life trigger her going forward.”

As far as inspiration for Eve, she looked to a few female-driven spy movies like Luc Besson’s La Femme Nikita and Hanna starring Saoirse Ronan.

“And then I also was sort of pulling some inspiration from Alicia Vikanderâ€™s performance in Ex Machina,” Tulloch revealed. “So itâ€™s just been really fun, the new character.”

What drives Eve is her mission. “Eve is basically — I donâ€™t want to say brainwashed because she hasnâ€™t been brainwashed,” she explained. “But she almost was broken.”

“I would say Eve is just so laser-focused and just nothing can sort of get her off her mission, which is to, basically, eradicate Black Claw,” Tulloch continued. “Thatâ€™s why in her head, sheâ€™s like thatâ€™s the only reason Iâ€™m alive right now and why Iâ€™m not wreaking havoc and destruction upon people I love.”

Eve’s capacity for staying laser-focused will probably be tested when she inevitably meets up with Nick. “With Nick, there just maybe…the tiniest little tug,” she teased. “But she’s not even going to go there. She’s not even going to let her mind go there or her heart go there because she’s like, ‘I’m a new person. Juliette is dead. And I’m really just here to get the job done.'”

Viewers will only get to see a little of what Juliette went through to become Eve. “You will see snippets of how she trained,” she confessed. “There’s a really cool — I want to say it’s in like episode eight or nine — there’s a really cool scene. She’s so physically powerful. But she doesn’t even train like normal people. So you’ll see some of that.”

Until then, much of the anticipation involves Eve’s confrontations with Juliette’s loved ones. “Eve has interacted with almost everyone. And everybody has sort of had different reactions to her,” she previewed.

The Past Comes Back To Haunt, Arrow "A.W.O.L"

Lifetime Movie Network Preview: I Think I Do

VICE Preview: “Afghanistan After Us” and “La Haine”