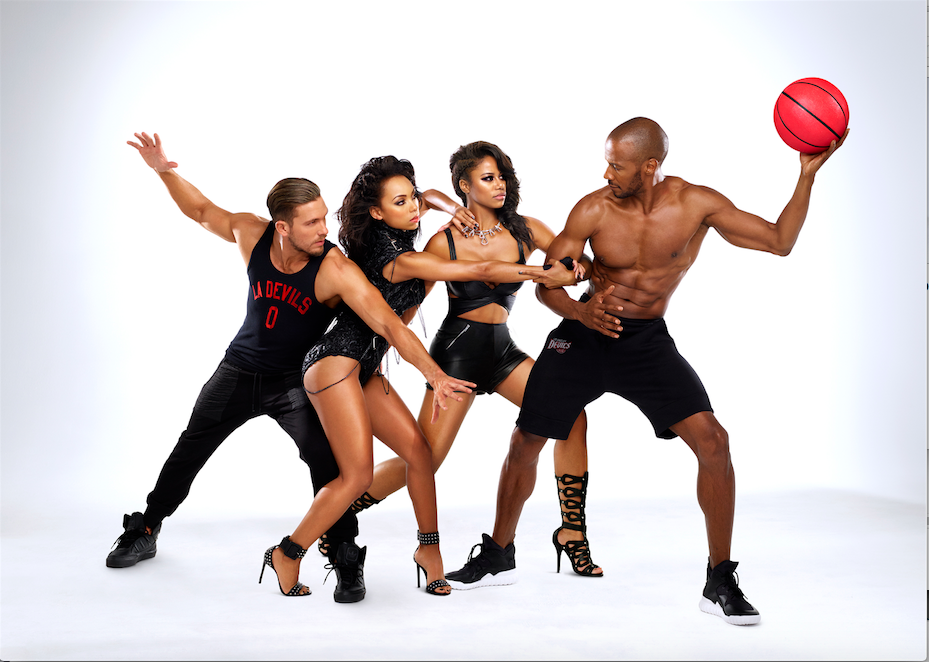 It’s been a long hiatus but VH1’s Hit the Floor is finally back — the third season hits air tomorrow night. Viewers already know that German killed Olivia Vincent. Now it’s time to find out how the next phase of this murder mystery plays out.

But before we do, let’s play catch up. At the end of Season 2…

TV Goodness recently attended the Hit the Floor premiere and screening party where creator James LaRosa exclusively previewed the new season and talked about the reason for the lengthy break between Seasons 2 and 3.

“The short answer is that’s probably more of a VH1 question,” he explained. “I don’t schedule. All I can do is make a kickass show. And I think I do okay in that department.”

LaRosa’s happy his series is back on Monday nights and teamed up with Love & Hip Hop. He’s also ecstatic with the way VH1 has promoted the new season. “There are billboards everywhere. There’s all the signage in New York’s subway system and there’s magazines and all these website takeovers,” he raved. “They absolutely have heard the fans. We have all heard the fans. And they are basically like, here you go and thank you.”

Which leads us to the new season and the stories fans have been waiting and waiting to see continue.

German killing Olivia has to be considered the show’s biggest, juiciest reveal to date. “I think German’s storyline this season is going to be so riveting because you have a guy in Derek saying I’m going to fight for her,” LaRosa said. “There’s somebody standing in the way and that person has pushed a b–ch to her death. And you have Ahsha who’s sleeping with the enemy — that’s some drama!”

Derek making it his business to get Ahsha back might mean he needs to watch his own back. “I think he wants something that German has so I would not necessarily want to be in Derek’s position just based on that equation alone.”

Expect all the characters to get pushed…in a good way. But it’s nothing these actors can’t handle. “The whole cast this season has been given story. After two seasons, I’m able to see pockets of things that they can do that maybe they haven’t done before,” LaRosa said. “And then I go, what if I did that? Or how could I maybe stretch them this way?”

Right from the premiere, these characters make moves that serve their own agenda. “Hit the Floor‘s got some smart, crafty people, don’t they? Nobody just sits there and watches.”

Including the new boss of the Devils. “Jodi [Lyn O’Keefe] playing Lionel — her character is like fire in Season 3. You have to watch out for Lionel,” LaRosa said with glee. “At the end of Season 2, Lionel lost her career, she lost Pete. She lost her baby with Pete. This is the one thing that has gotten her power.”

Pete feels responsible for his ex’s entrance into Devil Nation. “And Sloane is gunning for Lionel. It’ll be interesting if and when Pete comes into play because he might have some participation.”

Look for Zero and Jude drama to unfold. “At the end of Season 2, Jude lays his heart out for Zero,” LaRosa recapped. “Now we’re coming into a season where Zero always gets what he wants. And on his own terms, but Jude wants what he wants. I think that there’s a battle of wills going on. And you have to wonder who’s gonna give first.”

As usual, the show has lined up some great guest stars. Lynn Whitfield returns as Jelena’s mother. Introduced in the beginning of the season are Jonathan Bennett and Billy Baldwin. “He’s a billionaire. He loves sports in the bedroom, in the boardroom, on the court. He likes to get involved in things,” LaRosa teased. “He factors into storyline in Season 3 in a very big way. He has a past with someone inside Devil’s Nation.”

Kim Wayans and Michael Beach are two more guest stars headed Hit the Floor‘s way later this season. According to LaRosa, these actors who come to play aren’t going to be disappointed.

“You’re not going to be the person who answers the phone. You’re gonna be in the mix, right? Our set, our cast, really has a reputation for getting along and supporting each other,” he said. “And I feel like it makes it a welcoming environment for people to come and be sort of fierce and fabulous and have great lines and just be badasses.”

Hit the Floor premieres tomorrow night at 9/8c on VH1. Check back here tomorrow when the cast weighs in on Season 3.