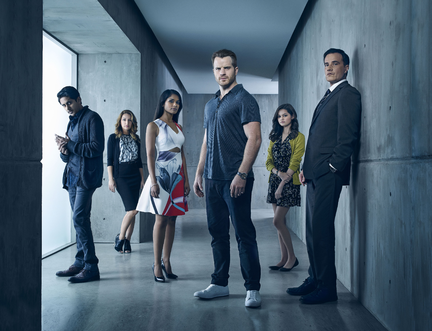 Starting tonight on FOX is Second Chance, a new series that features themes like reanimation, redemption, and rejection. At the center of this story is Jimmy Pritchard, a disgraced ex-sheriff who’s murdered and brought back to life. His resurrection comes complete with superhuman abilities, life-and-death obligations, an opportunity to repair his relationship with his family and even to have some fun.

Seventy-five-year-old Jimmy Pritchard (guest star Philip Baker Hall, Modern Family, Magnolia) is a shell of his former self. A drinker, a womanizer and a father who always put work before family, Pritchard was forced to resign as L.A. County Sheriff for corrupt conduct more than a decade ago. Now, some 15 unkind years later, he is killed when he stumbles upon a robbery at the home of FBI Agent Duval Pritchard (Tim DeKay, White Collar), one of his two children. But death is surprisingly short for Jimmy, who is brought back to life by billionaire tech-genius twins Mary Goodwin (Dilshad Vadsaria, Greek, Revenge) and her brother, Otto (Adhir Kalyan, Rules of Engagement), founders of a social networking empire.

Resurrected as a younger, better version of himself, with physical abilities of which he never dreamed, a re-animated Pritchard (Rob Kazinsky, True Blood) is given a second chance at life. What will he do with it? Will he try to repair the damage he did to his family? Will he embrace a new sense of purpose or fall prey to old temptations?

When TV Goodness recently visited the Second Chance set in Vancouver as part of a press tour, the cast and executive producer gave us a sense of what to expect from this drama.

“It’s the least procedural procedural I’ve ever come across in my life,” explained Rob Kazinsky aka Jimmy Pritchard. “The running theme and tone seem to be the characters.”

However, there are cases of the week that require Jimmy and his son, Duval, to team up.

“There’s a procedural element to every episode. So when you’re watching you’re not only involved in the serialized elements,” said executive producer Brad Turner. “The best of television is when you have an interesting case going on but,Â also, the background is this serialized element, that you’re learning more and more about the characters because I think you get more invested in the characters as they move forward.”

Another pesky detail Jimmy has to deal with is the fact that his body will frequently face rejection if he doesn’t receive treatment. He needs to recharge or he won’t live. “The regeneration idea is the ticking clock,” said Turner. “It’s a great storytelling element to have this great asset sort of losing steam as it goes and we’ve used it several different times in the series.”

“I think the thing with Mary is she’s the heart of the show, she has that moral compass. Where Otto sees Pritchard as something that he’s separated from almost like an experiment, Mary sees Pritchard as this human being who has these flaws and the pain and the complications and everything. And, of course, when it comes to Otto, Mary has been responsible for raising him. So it really has to do with her having a very big heart and feeling what each person’s going through and having that dynamic where you have sort of these polarizing characters in Otto and Pritchard that are so in their worlds and very much on their roads and Mary having to balance these two important people now in her life.”

Second Chance premieres tonight at 9/8c after American Idol. One last word from Tim DeKay on what’s going to hook fans the most: