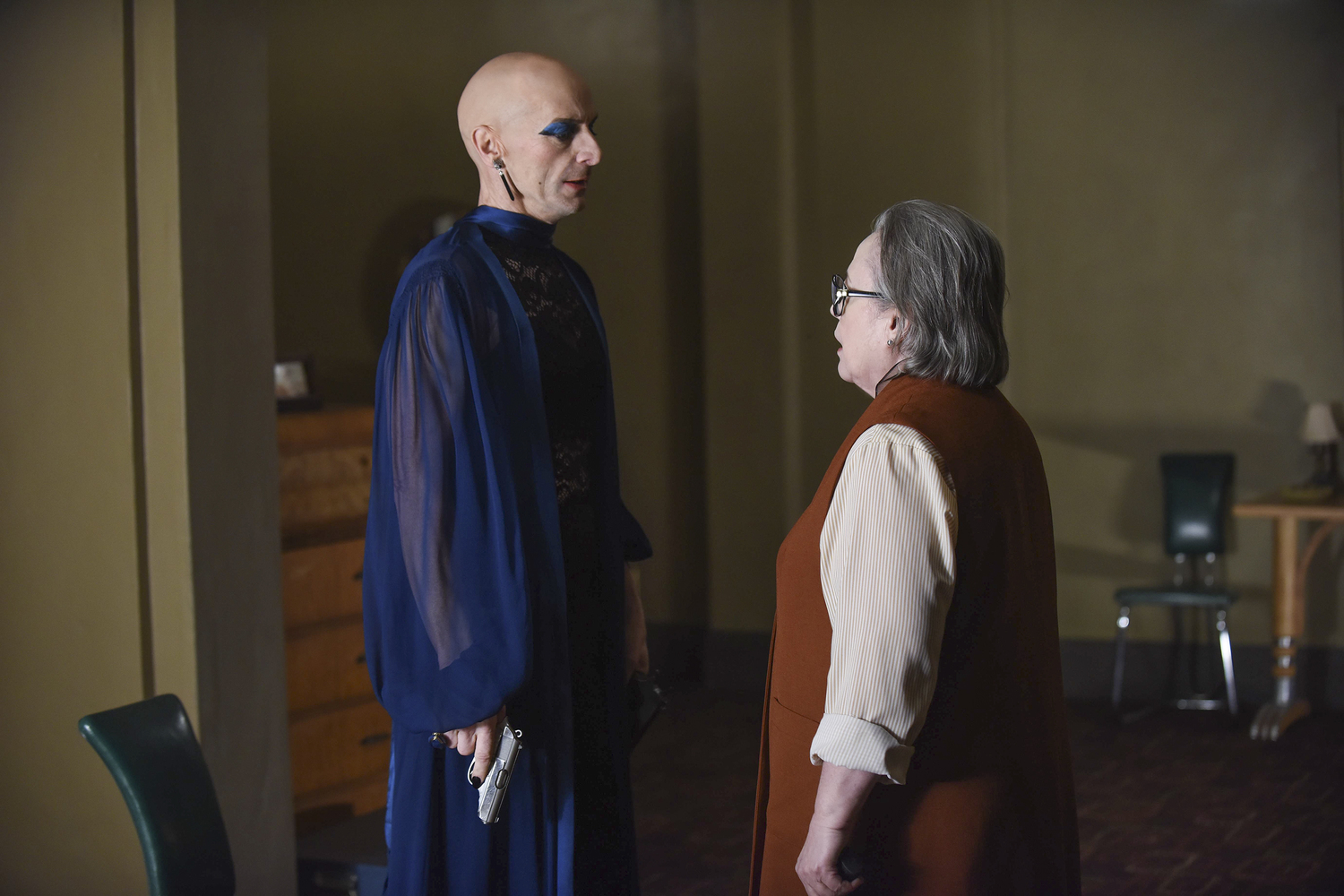 As American Horror Story: HotelÂ prepares to close its doors, I fear more for the plot wrapping up than for the remaining characters still alive. The penultimate episode, titled “Battle Royale,” exemplified the show’s strengths and weaknesses in equal measure.

Let’s begin with the result of Iris and Liz’s shootout in the penthouse. Predictably, Donovan was the fatal victim as the Countess managed to crawl away. Iris didÂ her son a final kindness by getting him out of the hotel before he died, making it so he wouldn’t have to spend his afterlife surroundedÂ by the Countess’ dead lovers.

The Countess found herself in the capable, if not crazy, hands of Sally. After watching Lady Gaga remain mostly stoic, it was a nice change of pace to see her truly commit to expressing the pain of losing Donovan, the pain of her physical wounds, and the pain of having to lose two of her “children” in order to save herself.

If only we didn’t have to listen to Sally’s sordid history while she saved the Countess. While her story proved disturbing (sewing her body onto two grunge rockers!), it also reinforced how the series could use something called subtlety. Having Sally repeat how she refuses to be leftÂ alone again only made me shout, “We get it already!”

Every move Sally makes can be seen a mile away. Of course, she wanted the Countess to retrieve John and bring him back to the hotel. Of course she tried to stab him as soon as he completed his final murder. It’s a shame how Sarah Paulson was given such a lackluster character to play with this season.

It’s also a shame howÂ Gabourey Sidibe‘s character from AHS: Coven was brought back just to be killed off minutes later. I’ve never been shy about my dislike for Season 3, but Sidibe’s character, Queenie, was one of the few characters I enjoyed in that story. After Iris and Liz let Ramona out of her hallway cage, she quickly decided to feast on Queenie.

Queenie managed to kick Ramona’s ass by using her human voodoo-doll powers, but was quickly dispatched once March got involved. A strong woman’s life was now over based on a supernatural technicality.

Ramona was then tasked to make sure the Countess died inside the hotel so March could have his bride forever. In a confusing turn of events, Ramona got a little… sidetracked. When face to face with the Countess, Ramona turned into a weak puppy as soon as the Countess apologized and the two proceeded to have sex.Â However, we did not see what happened to Ramona afterward. Did the Countess kill her? Did Ramona make a quick exit from the hotel without March knowing?

I loveÂ Angela Bassett, but her character was neverÂ fleshed out past her surface-level “blacksploitation” persona. Yes, that’s what her character had done for a living, but who was this woman at her core? We got a brief glimpse at her life while taking care of her father, but where wasÂ the emotional depth as a result?

As the Countess packed up her bags wanting to leave the hotel for good, she was promptly shot to death by John, who needed to complete his final Ten Commandments murder. Here are the boring plot points for John:

After placing the Countess’ head on his display case, John wasÂ saved by March when Sally tried to kill him. Apparently March can spend the rest of eternity with his obsession, but not Sally.

March was floating on cloud nine now that the Countess wasÂ dead and trapped in the hotel. As he gleefully welcomed his true love to dinner, Ms. Evers was anything but happy. She finally confessed that she was the one to tip off the police. March was furious, but Ms. Evers held firm to the belief that she truly loved and remained devoted to him.

Mare Winningham and Evan Peters have been the real high points of this season, and Winngham’s confession was both profound and saddening. Now that March had banished her from his sight, she revealed she felt strangely free.

Unfortunately for the Countess, March doesn’t plan on banishing her anytime soon. According to March, their love will last “until the sun falls from the sky and the heavens burn in conflagration.”

Here’s a sneak peek of the season finale, titled “Be Our Guest.”