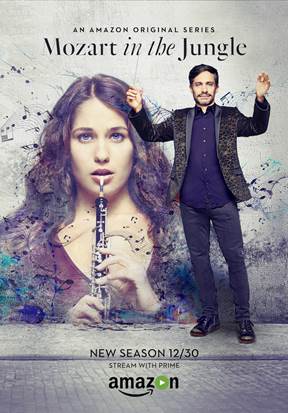 WARNING: Spoilers for Mozart in the Jungle

A free-spirited maestro hired to lead a prestigious orchestra. A talented oboist looking for her big break. A master conductor past his prime having to check his ego at the door over and over again. The first season of Mozart in the Jungle introduced us to the not-always-harmonic world of the New York Symphony.

Armed with beautiful music, a fabulous cast and a willingness to show the good, bad and the funny side of a universe not often seen on the small screen, the quirky comedy recently received a couple of Golden Globe nominations. Instrumental to Mozart‘s positive impression with the Hollywood Foreign Press Association (HFPA) — the group that heads up the Globes — might be the very subject it spotlights.

“They probably liked the fact that the show was set in the world of classical music,” says Paul Weitz, who executive produces the hit Amazon series along with Roman Coppola and Jason Schwartzman. “Itâ€™s interesting because a lot of the stuff that I read said hereâ€™s a show that got a Golden Globe nomination despite the fact that itâ€™s set in this potentially esoteric world.”

What may have put the show over the top with the HFPA is its global reach and themes. “Honestly, we have an international cast,” explains Weitz. “Gael (Garcia Bernal) being from Mexico, Malcolm (McDowell) and Saffron (Burrows) being from England. I think it’s one of the few shows where the protagonists are different ages. You have interesting characters who are in their 60s and interesting characters who are in their early 20s. I don’t think that happens much.”

Along with Mozart in the Jungle‘s nomination, Garcia Bernal earned an acting nod for Best Performance in a Comedy or Musical. As the one-named Rodrigo, the actor is fearless. “Itâ€™s a great performance from somebody who one associates with drama but who happens to have a large portion of Cary Grant in him,” says Weitz. “Heâ€™s utterly charming and idiosyncratic and not afraid to play the fool sometimes.”

The Golden Globe success comes at a perfect time, especially if the show’s surprising nominations prompt people to quickly binge the first season. Starting today, Season 2 drops on the masses. Look for the stories to take the characters deeper and make them more layered. It all starts with Rodrigo, whose journey is rather turbulent.

“We really like the idea that the theme of this year is what happens when the way you have identified yourself doesn’t work anymore,” says Weitz, who also directs several of this season’s episodes, including the finale. “For him, he’s always been the enfant terrible, but he has a bad trip visit from Mozart in the beginning who says maybe you’re not an enfant terrible anymore. Maybe you’re just terrible. What happens when you get your first white hair in your beard? That is what he’s dealing with this season.”

A trip home and a difficult request endÂ up messing with Rodrigo’s mojo. He’s “being given a big guilt trip by his mentor who wants him to throw everything aside and go back home,” teases Weitz. “Simultaneously to that is the idea that he gets cursed and that’s in his psychology, which is a fairly hyper-realistic thing.”

While Rodrigo struggles to maintain his status quo, Hailey (Lola Kirke) attempts to rise above her status as the maestro’s assistant, a job that often requires her to make a perfect cup of yerba matÃ© tea. Weitz admits they wanted to add more shades of gray to the character. “In the first season, sheâ€™s essentially an ingÃ©nue and sheâ€™s the eyes through which weâ€™re seeing all this new information about the symphony. And in this season, sheâ€™s making some decisions based on her ambition and her desire to not always be the good girl.”

In Season 2, the relationship between the maestro and his assistant gets even more…complicated. “They have this friendship and core identification with each other and theyâ€™re also thrown into situations where theyâ€™re alone together and thatâ€™s when people tend to have flings,” confesses Weitz. “[Hailey] is becoming more empowered during the course of the season and basically, by the end of it, itâ€™s her decision whether to proceed romantically or not.”

In fact, one of Weitz’s highlights from this season was getting to direct Dudamel, who happens to be the conductor, as well as the Music and Artistic Director of the LA Philharmonic. “Gael got to conduct the actual Los Angeles Philharmonic at the Hollywood Bowl in front of 12,000 people and got some lessons from Gustavo Dudamel ahead of time,” he says. “He was extremely natural and funny in front of the camera and self-deprecating. Like he came up with some improv stuff which was self-deprecating and very funny. That was super cool.”

The entire second season of Mozart in the Jungle streams on Amazon starting today. Here’s a preview: