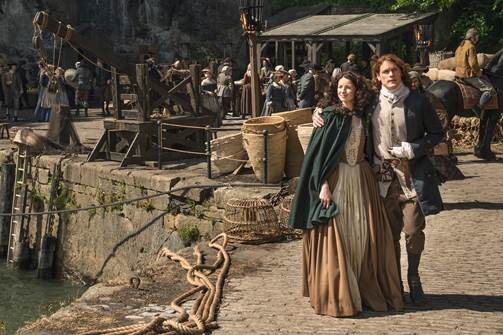 A major shout out to Starz for kicking off December in style. As part of its 25 Days of #OutlanderOfferings, the channel has released a teaser forÂ the second season of Outlander, the hit drama that stars Caitriona Balfe and Sam Heughan.

For those who haven’t read the Diana Gabaldon books, here’s some intel on what the second season is going to look like:

Season Two of Outlander begins as Claire and Jamie arrive in France, hell-bent on infiltrating the Jacobite rebellion led by Prince Charles Stuart, and stopping the battle of Culloden. With the help of his cousin Jared, a local wine merchant, Jamie and Claire are thrown into the lavish world of French society, where intrigue and parties are abundant, but political gain proves far less fruitful. Altering the course of history presents challenges that begin to weigh on the very fabric of their relationship. However, armed with the knowledge of what lies ahead, Claire and Jamie must race to prevent a doomed Highland uprising, and the extinction of Scottish life as they know it.

Starz dropped a teaser today. How spoiled are we going to get by the end of the #OutlanderOfferings? Apparently we can look forward to never-before-seen Season 2 photos, cast interviews, holiday recipes, and the chance to win special Outlander store items. Make sure to keep checking the show‘s social media accounts.

It is the season to be spoiled, is it not? Especially since Season 2 is still so far away.