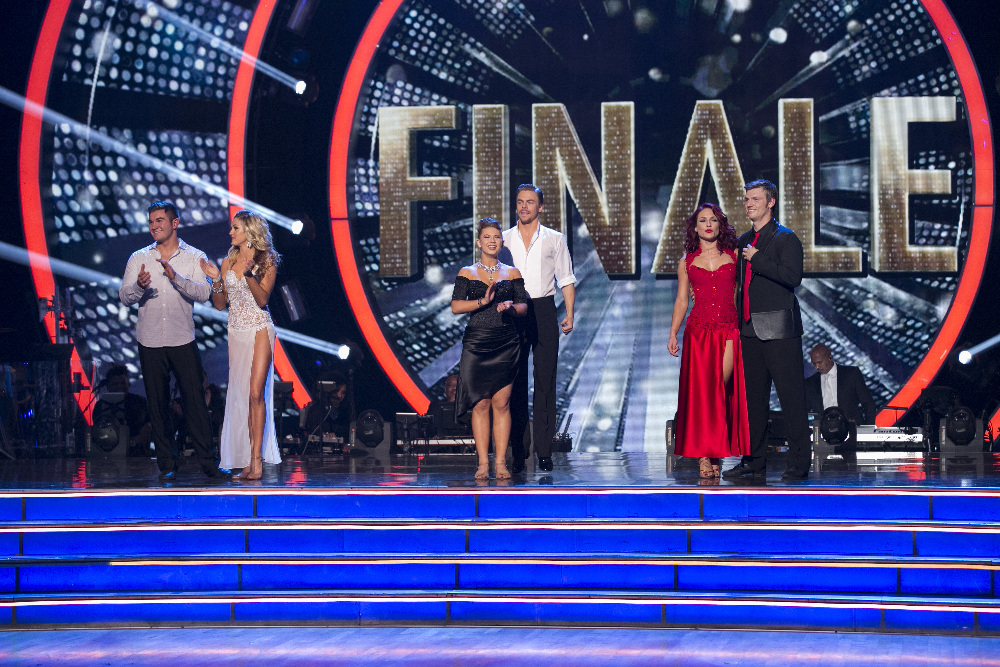 It’s finally time to find out who takes home the Mirror Ball trophy for Season 21. The whole cast came back to celebrate. Chaka Khan performed. Kim Zolciak came back and got to look likeÂ I Dream of Jeannie. Itâ€™s crazy. They performed at The Grove shopping center in L.A. as well as in the ballroom. Andy Grammer sang his newest single. This season featured all these singers trying to dance. In the finals, they actually got to do the thing that made them famous. Clearly, this is the biggest finale this show hasÂ ever had.

But what it comes right down to is crowning a new champion. No rest for the Final 3. After Monday’s exciting dances, they immediately had to learn and rehearse a fusion routine. HowÂ didÂ they do?

The couple in 3rd place was announced and thankfully it’s Alek & Lindsay. I think that is fair.

It all came down to Nick & Sharna and Bindi & Derek. The winners of the Mirror Ball trophy: BINDI & DEREK.

Tom: â€œNow I have a craving for the Cheesecake Factoryâ€
Tom: â€œNo way you are fitting inside that bottle.â€
Tom: â€œYou know whatâ€™s embarrassing? My bobble head has better rhythm.â€
Erin: â€œHappy holidays. My gift to you!â€
Tom: â€œLetâ€™s just let him do whatever he wants to do.â€
Tom: â€œSantaâ€™s been working out.â€
Tom: â€œGary Busey as Santa. Thatâ€™s enough to plug up your chimney.â€
Erin: â€œClearly youâ€™re holding it together.â€
Erin: â€œThis is Alek not a horse. This is our friend.â€
Erin: â€œWe need security up here.â€
Tom: â€œAnd Victor will get the photo bomb award.â€

That’s a wrap on Season 21. The clock starts on the cast for Season 22. And the best news? Len Goodman is coming back as judge! See you then.

Dancing with the Stars returns in the spring on ABC!

Haven Preview: "A Matter of Time"

The Americans “Do Mail Robots Dream of Electric Sheep?”