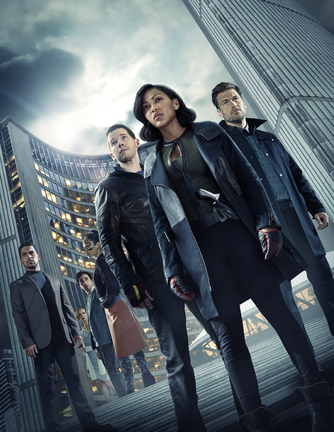 Last weekâ€™s Minority Report was a big one for Detective Lara Vega. It tackled the death of her dad head on and provided some much welcome backstory for the character.

When TV Goodness ventured to Vancouver recently, we visited the set of the FOX series and talked to Meagan Good about getting the opportunity to show a more vulnerable side of Vega.

Arthur and Dash team up to help a young girl in poor health whom they fear is the victim they see in their next vision. Although modern technology could save her, the community in which she lives prohibits the use of such equipment. When Vega and Agatha jump into the case, everyone must work together.

Up until now, Agathaâ€™s isolated herself from life and her brother, Dash. Sheâ€™s had a vision where she and her siblings are back in the milk bath, a place they never want to end up again. On top of that, in this vision, Vega is right there. Agatha immediately concluded that Dashâ€™s new partner is responsible for this horrifying situation. Which means, when Agatha meets up with Vega for the first time, thereâ€™s no way itâ€™ll be a pleasant situation.

Max Borenstein (Creator/Executive Producer): Weâ€™re gonna go to the island. First of all, weâ€™ll learn it wasnâ€™t always an island. Thatâ€™s a little piece of futurism for that episode – itâ€™s a former peninsula. This is a place where you can live off the grid and so who else is on this island and howâ€™s Agatha been living there and whatâ€™s her life been like. And what possesses someone whoâ€™s wanted nothing but to escape the world to have her brothers and this police detective back there. And so thatâ€™sâ€¦the episode is really going to explore â€” both in the past and what became of Agatha pre-crime and now in the present, the person that she is.

Laura Regan: Itâ€™s a big episode for Agatha because you get a lot of her backstory. You see a lot of things that happened when they first arrived on this island, Fiddlerâ€™s Neck, and how she went about interacting the community, a certain man that she met and her history with him and so on.

Regan: When she needs to help someone out, she calls Dash. And sheâ€™s a little bit testy with him, but it comes down to her needing him. So thatâ€™s kind of a cool thing for this episode and yeah, she kind of reveals just as much. The sharing with Arthur but not with Dash changes with episode six.

Even more than Agatha and Dash reconnecting, a big part of â€œFiddlerâ€™s Neckâ€ will be Agatha and Vega meeting for the very first time.

Borenstein: She ainâ€™t thrilled when it happens. But Vega, of course, is also, as we know, the greatest ally the pre-cogs have. The only person who knows who they are. And thus far has proven herself to be trustworthy albeit someone you can argue is exploiting Dash but heâ€™s willing and eager to be exploited for that. These visions are things that haunt him. So Agatha has a very difficult kind of relationship with that but sheâ€™s going to have to come to terms with it. And the relationship really is very much about the relationship between the two of them.

As for Stark Sands (Dash),Â find out what “Fiddler’s Neck” has to do with the classic series starring them Duke boys, Dukes of Hazzard.

In big picture Minority Report news, Borenstein teases what youâ€™re going to see in the coming episodes as the series winds down to episode ten, the showâ€™s season (possibly series) finale.

Borenstein: I can tease that what weâ€™ve been teasing is a hundred percent gonna happen. In the sense that that vision that Agatha has in the beginning of the milk bath and then being in the milk bath and Vega being there and the very thing sheâ€™s so afraid of and has been talking all about and pestering her brothers about. Theyâ€™re pre-cogs. They see the future. Itâ€™s going to come to pass. The question is how, why and what theyâ€™re going to do about it. But weâ€™re gonna get there. And weâ€™re gonna get there in episode ten. And it wonâ€™t be exactly how people expect it.

The Walking Dead "Thank You"