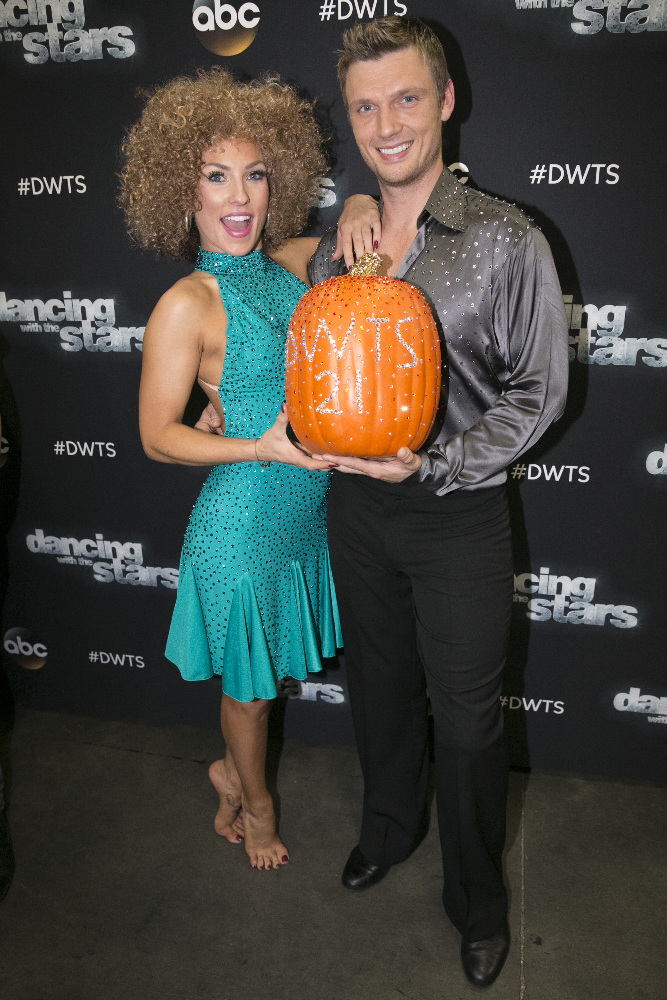 Itâ€™s a double dose of fun on the latest Dancing with the Stars. That’s because it’s Halloween Night as well asÂ the much anticipated Freestyle Team Dance. Plus,Â Leah Remini, is back filling in for Erin Andrews. Here’s the breakdown of the couples:

Fun Fact: Derek has never lost a team dance but as Tamar says: Doesnâ€™t mean he is going to win again. Last week the team captains were decided based onÂ who had the highest scores of the total season. ThatÂ meantÂ Bindi and Nick got to select the teams. The breakdown:

And, yes, Derek’s winning streak with the freestyle team dance is finally over. Team Nightmare wins!

The couple eliminated tonight is Hayes and Emma.

Tom: â€œI am standing next to the official tree for the California drought.â€
Leah: â€œDonâ€™t cut me! Donâ€™t cut me! Donâ€™t cut me to the core Mark.â€
Leah: â€œDamn you!â€
Leah: â€œI didnâ€™t curse! I didnâ€™t curse!â€
Julianne: â€œI donâ€™t know what it says about me, but Iâ€™m turned on now.â€
Tom: â€œI know what Iâ€™m getting you for Christmas, the total catalogue of Marilyn Manson.â€
Tom: â€œWe would also like to thank the orthodontist to the undead for being with us all this week.â€
Tom: â€œThere hasnâ€™t been so much smoke in here since Tommy Chong was here.â€
Bruno: â€œIt was almost perfect!â€
Tom: â€œCan I just make a comment to the booth? Weâ€™re thisclose away from being a radio show.â€
Carrie Ann: â€œIf I was the other team, I would be pooping in my pants right now!â€
Tom: â€œFor Bindi, itâ€™s hard to be creepy.â€

The competition is heating up and everyone left is pretty good. Who will be eliminated next week? Will the right people make the finals? See you next time!

The Flash Preview: "The Fury of Firestorm"

Dancing with the Stars “Season 17 Week 9” aka Trio Night