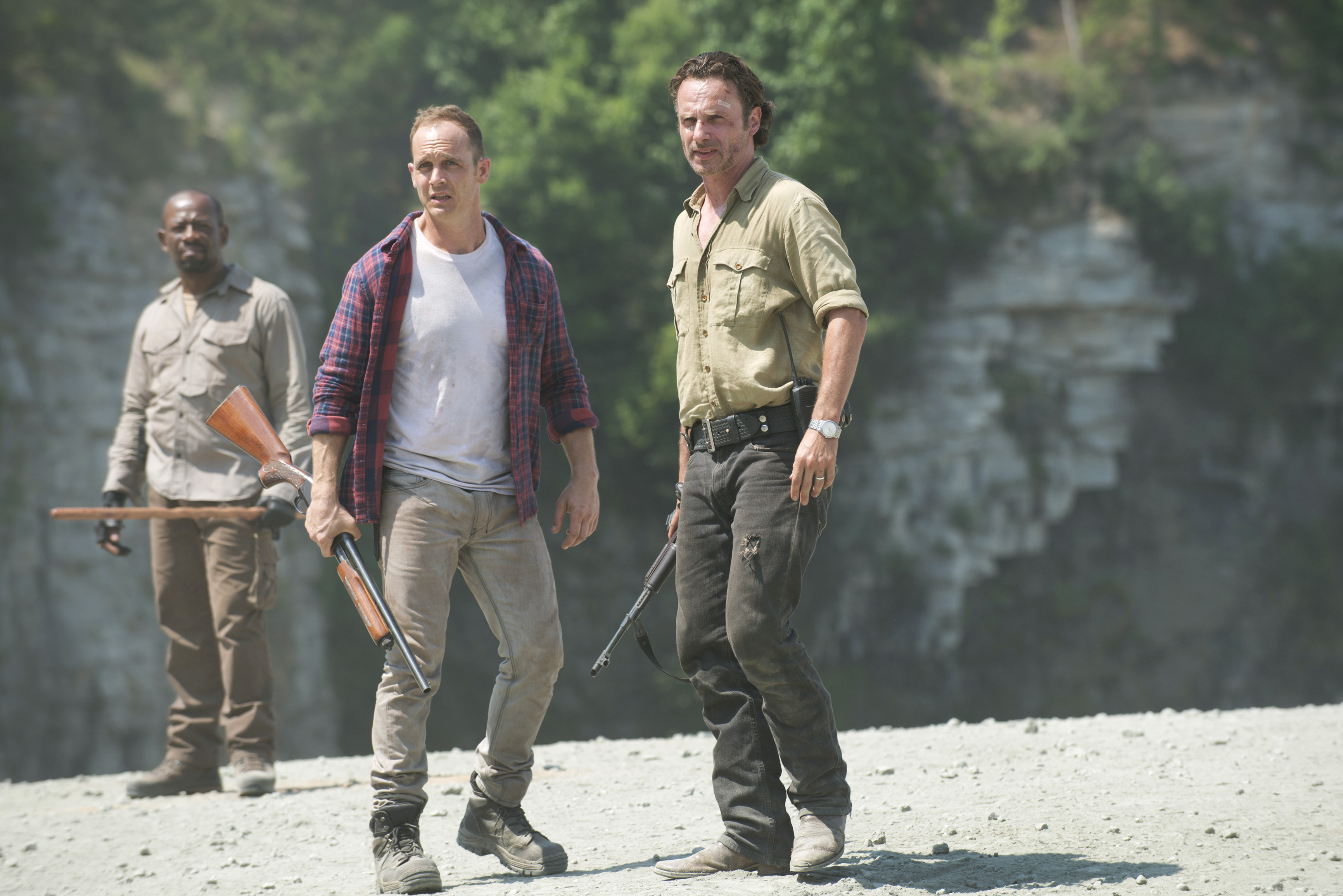 It’s October again, and that can only mean one thing: a new season of The Walking Dead has begun. Welcome to the premiere of Season 6, and boy, was it a doozy.Â There was no shortage ofÂ action as Rick and Co. teamed up with members of Alexandria to lure a quarry filled with walkers away from their little sanctuary. However, there was still plenty of time for quieter moments that illustrated where everyone’s minds were at.

“First Time Again” was laid out in nonlinear fashion with the current action presented in color and the past events presented in black and white. While some may try to find a deeper, artistic meaning behind this choice, I think it was done to make the audience’s job easier. By presenting the two timelines in visually different ways, the audience was able to focus on the action rather than try to figure out what was past and what was present.

Picking up the same night we ended last season, everyone was dealing with the aftermath of Rick killing Pete. You could see how quickly Deanna’s attitude had altered when she told Gabriel he was wrong about Rick. Eugene, Tara, and Glenn were reunited in the health wing, where Glenn decided to give Nicholas a second chance and lied about their injuries. Then we had Rick and Morgan reunited. Except, it wasn’t the warm and fuzzy reunion we were all hoping for. Rick is distrusting of everyone these days, and needed to get to know Morgan again. The following day, Rick decided that Pete didn’t deserve to be buried within Alexandria’s walls, so he and Morgan took his body out to the woods, where Pete’s son, Ron, followed them. This is when they discovered the GIANT quarry full of walkers.I was glad we finally figured out why Alexandria was able to survive this long.

Being the leader that Rick is, he decided that they needed a plan to get the walkers away from the quarry and their community. It wasn’t a matter of if, but when those walkers would head their way. Rick was met with resistance by Carter (Ethan Embry), a member of Alexandria. The usual suspects volunteered for Operation Quarry Walker Parade. Side note: Can I just say how much I laughed when Gabriel volunteered and then was immediately shut down by Rick! End side note.

Rick’s the leader, but that doesn’t mean everyone agreed with him. Morgan has become a zen master who values life, while Rick doesn’t leave room for people to make mistakes anymore. Even Daryl didn’t agree with Rick’s stance on not letting new people into the community. As Rick’s plans for the quarry walkers began to take shape, Eugene overheard Carter talk to some other town members about taking out Rick. After getting caught, it looked like poor Eugene was done for until Rick, Morgan, and Daryl came in. I’ll admit, I thought it was pretty funny how easily Rick was able to disarm Carter. Instead of killing Carter, Rick told him heÂ needed to get on board with his authority.

With the action ofÂ Operation Quarry Walker Parade going on throughout the episode, it was nice to have moments of stillness. Rick’s scene with Morgan letting him hold Judith was sign of trust, but this scene also highlighted the differences between these men. Rick knew what Carter’s fate would be before it even happened. Men like Carter are not built to last in this new world. Then we had Morgan’s interaction with Carol, who kept up her whole Suzy homemaker charade. However, being the observant man that he is, Morgan could see right through Carol. I absolutely loved this moment, and I hope we get more scenes between them going forward. Then there was Tara learning what really happened to Noah, but choosing to follow Glenn and Maggie’s example of forgiveness and allowing someone to be redeemed.

It’s unclear how much time passed as everyone prepared for Operation Quarry Walker Parade, but on the day of the dry run, everything went awry. Carter was bitten in the face, and was killed by Rick after he wouldn’t stop shouting from the pain. I was surprised to see Carter killed so quickly after being introduced, but it served as a reminder that people like him don’t last long. I was more concerned by the disapproving looks on Morgan and Michonne’s faces. What was Rick supposed to do? Let Carter scream and attract walkers? I was fully supportive of Rick killing Carter. If anything, it put him out of his misery.

Then the s**tÂ really hit the fan. As the walkers were following the road as planned, the sound of a loud horn blared out distracting the them. Rick and Co. had no idea what the sound was, but they knew it wasÂ most likely coming from Alexandria, which is exactly where the walkers were heading towards.

I enjoyed this episode from start to finish. This was clearly the most ambitious episode to date. We got a ton of action, but also some terrific character moments. I can’t wait to see where this season goes and who makes it out alive!

Check out a sneak peek at the next installment titled “JSS.”

So Many Questions, Homeland “Tin Man Down”