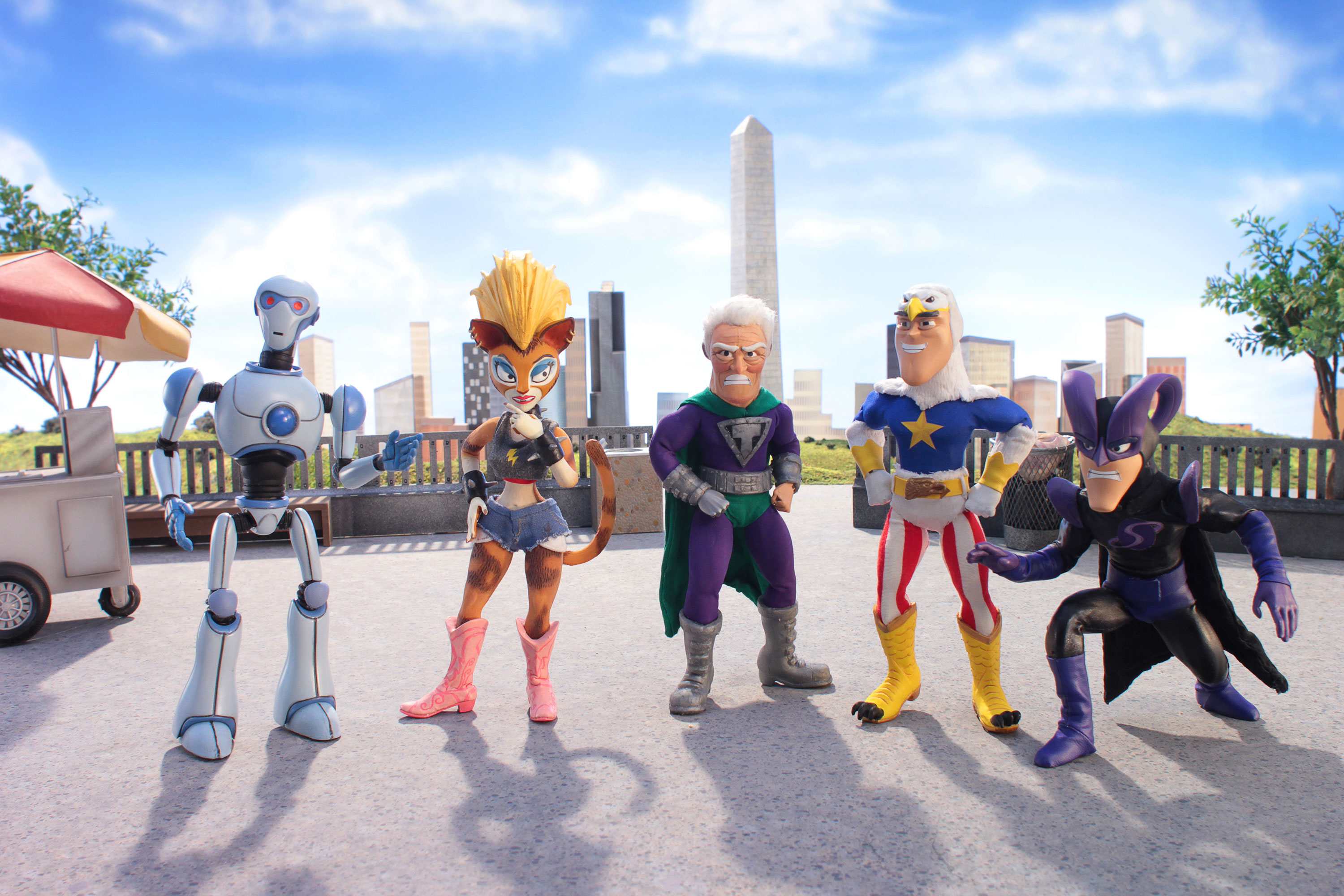 There’s a newÂ groupÂ of heroes protecting the world fromÂ super villains and they’re called The League of Freedom. Their (somewhat) fearless leader isÂ the aging but legendary Titanium Rex. Starting today you can witness their adventures on Crackle in a must see stop-motion animation series called SuperMansion.

Before you hit play on the trailer, know that this show comes from the creators of Robot Chicken. That means get ready for a massive dose of irreverent humor. The characters that make upÂ this team all come with a twist, a super twist if you will.

In SuperMansion, EmmyÂ® award-winning actor Bryan Cranston (Breaking Bad) stars as the voice of Titanium Rex, leader of The League of Freedom, a motley band of super heroes that has seen better days. Titanium Rex struggles to live with and fight alongside the Millennial-aged, often lackadaisical members of The League of Freedom as they battle against arch-enemies and struggle to remain relevant in a world overcome with heroes.

His Twist: This Super Man won’t be forced into retirement. Rex wonâ€™t give up his legacy without a fight. If they want the team, theyâ€™ll have to pry it from his liver-spotted hands. If that means controlling a new generation of self-centered, eccentric heroes, so be it.

His Twist: Think a bratty Batman. Black Saturn is the millionaire playboy with a dark secretâ€¦and that secret is that heâ€™s been a coddled baby all his life. Heâ€™s a pampered trust-fund baby who decided to dress up as the defender of the night full time after he â€œlost his parents.â€ No, theyâ€™re not dead. Theyâ€™re just embarrassed by their grown son who spends his life in Spandex and a cape.

Her Twist: She’s a different kind of Cat Woman. Cooch began life as a raggedy trailer park cat for a Kentucky hoarder named Claudette. Titanium Rex and Dr. Gizmo fell out of the upper atmosphere during one of their battles and Cooch was struck with an EVO-RAY, evolving her into a humanoid cat. Sheâ€™s incredibly fast and agile, but retains some of her feline heritage (do NOT forget to empty her litter box.)

Age: 22
Powers: Wings for flight, an eagle eye for spotting trouble and a beacon of the American Dream. Heâ€™s also skilled in traditional soldiery combat and peeling potatoes.
Specialty: Finding a way to perform in bed with his 90 year old wife.

His Twist: Consider this confused Captain America-type out of his time and element. American Ranger fought the Nazi scourge to victory. Shortly after the war, he was preserved, against his will, in a time-tunnel until America would need him again. Apparently, that day never came. Sixty years later, a maintenance crew found him in an old warehouse and pulled him out of deep freeze to join the League of Freedom. Now, trapped in a time when patriotism is passÃ©, this young man (with an 80-year-oldâ€™s politics. Heâ€™s not racistâ€¦he just needs a little time.)

His Twist: He’s one mess of a Hulk. Thereâ€™s no drug Brad hadnâ€™t tried. So when he was invited to be the test subject for an experimental drug at Optocorp, he jumped at the chance to get high on someone elseâ€™s dime. However, when the new drug reacted with his tainted bloodstream, Brad was transformed into the hulking pink brute he is today.

Age: N/A
Powers: A robot with the ability to transform his appendages into any tool.
Specialty: Pondering what it means to be human.

Its Twist: The artist formerly known as Robobot might be the most human of them all. While digging into his own past Robobot realizes that the person who designed his plans was a Jewish woman named Martha Goldstein. Robobot takes this to mean he has a Jewish mother and, according to the Torah, he is one of the chosen people. Robobot begins referring to himself as Jewbot and dives into Jewish tradition and lore.

Justified Preview: “The Trash and The Snake”