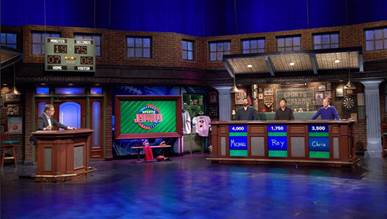 Fall might be the best time of the yearÂ for a sports fan. The NFL has (finally) returned. The baseball playoffs are about to start. The NHL preseason is just underway with the NBA about to follow suit soon. And there’s one more reason to rejoice: a new season of Sports Jeopardy! hits Crackle today.

Hosted by Football Night in America‘sÂ Dan Patrick, Season 2 looks to build on the success of the first season. To do that, the show is instituting a rule change and it has nothing to do with deflated balls.

According to the streaming service, the winner of each game will be allowed “to return the following week as a defending champion. As on the syndicated version of Jeopardy!,Â returning champions may continue to amass winnings onÂ Sports Jeopardy!Â as long as they remain victorious.”

In this series, players vie for points and the person who racks up the most takesÂ home $5000. So competitors might not earnÂ as much as their counterparts on the Alex Trebek-version of the game show but they can still win a pretty penny.

The fierce competition begins today with new Sports Jeopardy! episodes debuting every Wednesday at 9am ET exclusively on Crackle.

Take a look at the Season 1 Champion

Secrets and Lies Preview: “The Confession”