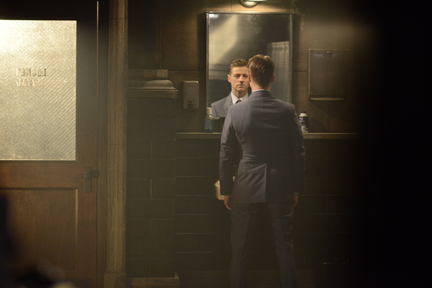 While all the Gotham press as of late has been about the Rise of the Villains, the person we can’t take our eyes off in the premiere is theÂ hero of the FOX series, Jim Gordon. It’s true.

Granted it’s because for the first time the character seems more human and flawed, more relatable. And it all stems from this latest career development:

Jim Gordon’s a cop. It’s in his blood. It’s who he is. What’s he going to do now that he’s no longer a police officer? He’s going to fight for his job. And the fight might get ugly:

Official FOX Synopsis for “Damned if you Do…”

Penguin is King of Gotham and…

…after a shakeup at the GCPD, Detective James Gordon’s moral compass wavers, as he seeks help from Penguin.

Meanwhile, Bruce Wayne continues to explore the secrets from his father’s office…

In “Damned if you Do…,” we see many of the characters in new roles because of what happened at the end of last season and because of some scheming and plotting in this first episode back. Barbara’s in a less glamorous place, as you can imagine. We do get a sense of her mental state. We also get a sense of Bruce’s mindset as he’s laser focused on getting in to his father’s secret whatever it is. There’s a whole new slew of villains — not sure what the goal is yet but its not going to be anything noble or on the up and up, that’s for sure.

Jim and Bullock share a really nice moment between them and because we love flashes of emotion, we really ate it up. And if you like that shot of Jim in front of the mirror, know that another character — a certain E. Nygma — also has a scene in front of a mirror. That one goes much differently, however. There’s also a great music cue near the beginning of the hour courtesy of Lou Reed’s “Perfect Day.”

Ben McKenzie is fantastic in “Damned if you Do…”Â Gotham Season 2 premieres Monday night at 8/7c.

We were able to take part in round tables at the most recent San Diego Comic-Con. They should help prep you sufficiently for Season 2.