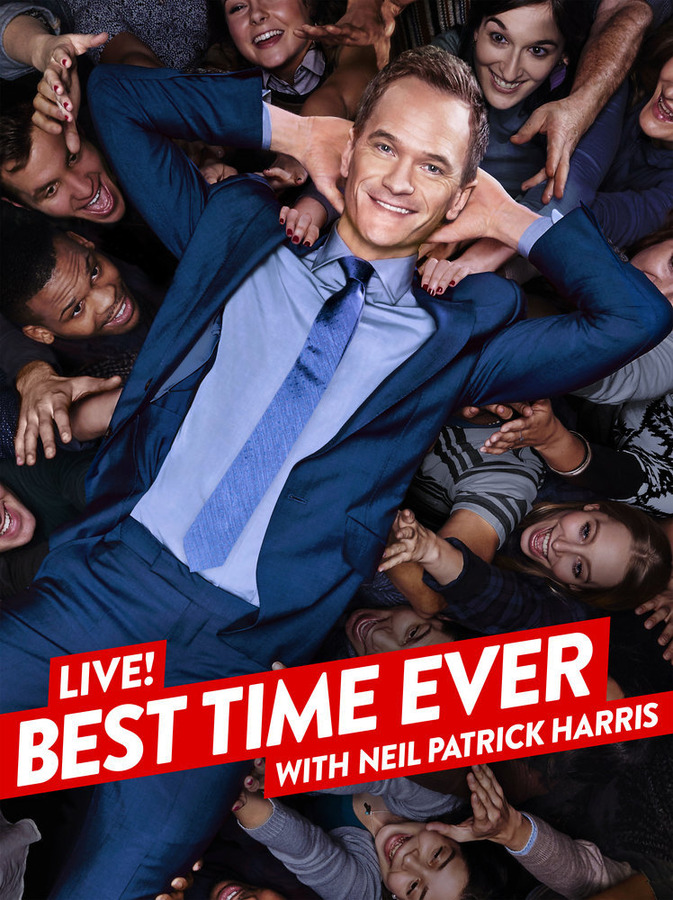 Neil Patrick Harris returns to primetime TV tonight on NBC. This time around his legen — wait for it — dary status will be because of his considerable hosting skills. His new show, Best Time Ever with Neil Patrick Harris, looks to bring variety back in a big, big way.

Series Synopsis:Â Five Emmy Awards and a Tony Award make multi-talented Neil Patrick Harris the perfect star for this live one-hour show that is unlike any other on American television. Anything can happen on Best Time Ever with Neil Patrick Harris, which will feature appearances by A-list stars, stunts, comedy skits, incredible performances, mini game shows, audience giveaways and hidden camera pranks.

Based on the wildly popular British hit Ant & Decâ€™s Saturday Night Takeaway, this genre busting-format and its fearless star will make for one of the best nights ever on TV week after week.

At the recent Television Critics Association’s Summer Press Tour, Harris admitted thereÂ is someÂ pressure with a project like this. “It’s a blind commit in certain ways because we want to withhold, we don’t want to reveal every single thing and every single person because it’s less exciting that way,” he explained. “So we’re holding a lot of cards close to our vest because that’s what’s going to make it fun to watch live. So I really do think it will be fun and, I’m hoping, a little bit game-changing.Â ”

Keeping up with the logistics of this show will be key, especially since this is live TV and anything can happen. According to Harris, “It’s essentially producing six or seven shows simultaneously.”

Here’s a tiny bit ofÂ what to expect:

“You have people who are creating games, finding ideas, prizes. That whole thing happens.”

“Then you have the little NPH, who is going out on his own segments, and those are created.”

“I’m going to be pranking celebrities, so we’re having to deal with the logistics of that.”

This will all go on for eight straight weeks, which seems like a very short season. But in terms of putting on a spectacular spectacular with a zillion different components, it’s just the right amount of time to whet everyone’s appetite and gauge whether the American public is ready for a Best Time Ever. “I think something like this deserves to be a little bit of an event,” Harris said. “It was important for me to be able to do it as a chunk and then step back. I don’t want to oversaturate this idea by just continuing to do it and do it and do it. But at the same time, I don’t want to get ahead of myself and start looking at the future when we really, really have to focus on the present.”

Tonight is the night to see if they can pull it all off.Â Best Time Ever with Neil Patrick premieres at 10/9c on NBC.

The Cast and EP Preview FX's The Bastard Executioner

Dancing with the Stars "Season 21 Week 1"