Sunday night, UP Television launches its fall film season with Welcome Home. Starring and executive produced by Luke Perry, the film examines homelessness against the backdrop of incredible success as an author is faced with a difficult predicament when he finds out a homeless single mother and her two children have been squatting in his home while he was out of town. 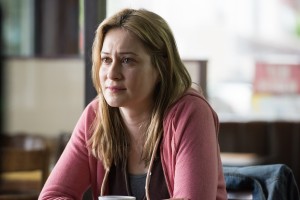 Joining Perry are Erica Cerra, who you’ll recognize from her run on Eureka, and Camille Sullivan, who works quite a bit in Canadian productions and might be familiar to you from early seasons of Rookie Blue and 2013’s Red Widow. The script was written by Jonathan Zeichner, who is the executive director of A Place Called Home, a non-profit youth center in Los Angeles. It was directed by James Head.

Homelessness doesn’t get anywhere near the press it did during the recession, but it’s still very much an issue for families who never quite got back on their feet. Dierks Bentley touches on a similar story in his new music video, “Riser.” Welcome Home gives the topic a sounding board in a family-friendly forum where it can create discussions at home for parents and children, especially kids who may have homeless classmates at school and not understand exactly what that means.

Welcome Home premieres on UP Television at 7/6c Sunday and repeats throughout the evening. Here are a few sneak peeks.

Revolution Preview: What to Expect from the Last Four Episodes of the Season [VIDEO]