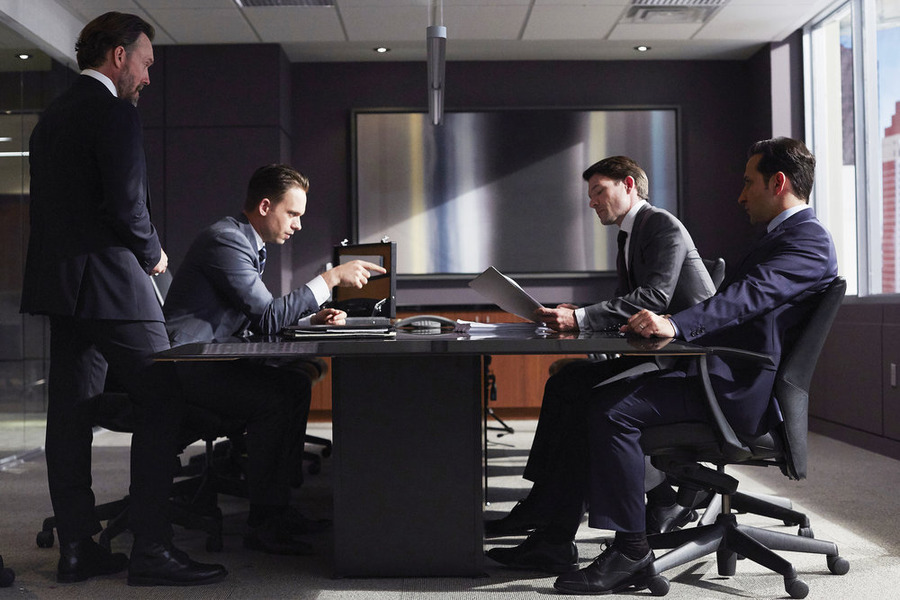 “I’m ready to talk about my mother.”

Seven words I’ve been waiting to hear from Harvey Specter. Last week, Harvey entered a new phase ofÂ his therapy. It’s been a slow road as his therapist tried to help him deconstruct the damage that he’s been living with for so long. He’s a stubborn guy so he’s fighting each step forward by taking a few thousand back. Now we’re at a point where he can really cut to the nitty gritty of his abandonment issues. Let’s hopeÂ we’ll find out more about his relationship with the mom who hurt him and his dad and brother so badly.

Donna came through for Mike big time when she helped him achieve Rachel’s dream: a wedding at The Plaza in New York…on her birthday. Give Donna a project and she’ll get it done somehow someway eventually. This time it took a fake French accent, sheer determination and a bit of a confrontation with Harvey’s new assistant, Gretchen. Those two epic forces clashed at first but then they both figured it’d be better to be allies. It was great to see these two share scenes. I’m still hoping Gretchen sticks around past this season.

Also, Mike and Louis made quite the team as they collaborated on a case. As usual there were some major setbacks but I’m glad Mike, in the end, learned that he can’t doubt Louis on every front — even though Louis has given him plenty of reasons to doubt him in the past.

Their case inevitably forced them to go up against the office ass, Jack Soloff. Is it just me or does everyone in the office always say Jack’s full name when mentioning him in conversation? It’s always, “Jack Soloff.” Jack Soloff proved he can’t let grudges go when he tried to get revenge on Mike and Louis. Thankfully, Jessica had to lay down the law with him once again. Don’t know how many chances this guy is going to get. How great is Jessica when she figured out Jack Soloff’s machinations had Daniel Hardman written all over it?

Which brings us to tonight’s episode. We heard his name…now witness his game once again. Daniel Hardman (David Costabile) returns in “Hitting Home.”

At Jessicaâ€™s (Gina Torres) behest, Mike (Patrick J. Adams) teams up with Jack Soloff (guest star John Pyper-Ferguson) to co-counsel a case, and despite their history the two come to a surprising understanding.

And Donna (Sarah Rafferty) and Harvey (Gabriel Macht) try to get their friendship back to normal, but Harvey has a hard time stomaching Donnaâ€™s â€œfriendly advice.â€

I’m so happy Amy Acker’s already back and it seems like Esther will have more face time with Louis this time around which is good. Although I’m kind of partial to Harvey and Esther (Hesther?) so let’s hope they share the same spark they had the first time she appeared.

The Eight Most Brutal Moments from the UnREAL Season Finale, "Future"