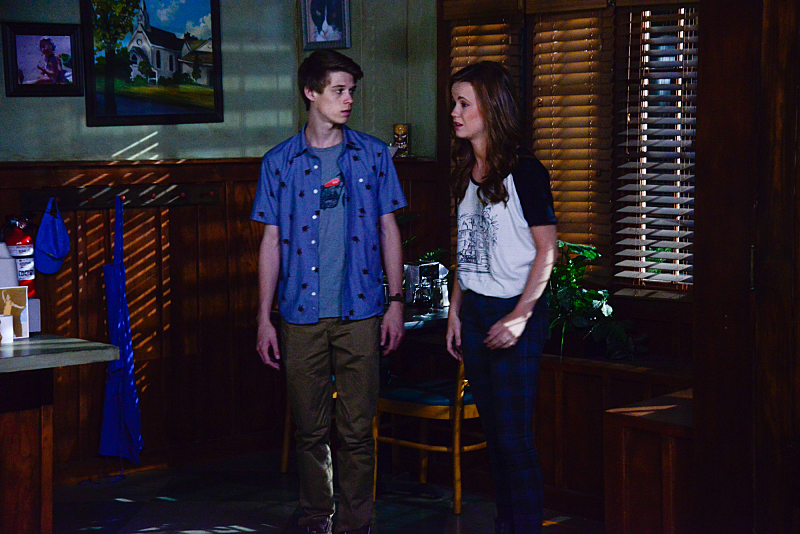 Right now on CBS’s Under the Dome,Â Team Anti-Kinship is slowly growing. For one reason or another Julia, Big Jim, Sam, Joe and Norrie aren’t exhibiting the brainwashing Stepford-ness everyone else in Chester’s Mill is.

Jim offed Dr. Marston. Julia tried to convince Barbie that Christine and Eva are not who they say they are. Sam figured out pretty quickly Christine had a role in Abby’s death. After he cleaned himself up, proceeded to stab her.Â Meanwhile, Joe and Norrie “kidnapped” Hunter, who’s ready to die because he doesn’t want to be a burden.

In this exclusive clip to Thursday night’s episode, Sam catches up to Joe and Norrie. Will they team up?Â After all, there is bad blood there…emphasis on blood.

Synopsis forÂ “Ejecta”: As the world outside the Dome is rocked by a catastrophic meteor shower, unexpected alliances form inside the barrier. Eva tries to indoctrinate Barbie deeper into The Kinship and Big Jim and Julia turn to one another while isolated on Bird Island outside of town. Also, Joe is forced to accept help from Sam, the man who killed his sister.

Under the Dome airs Thursdays at 10/9c on CBS.