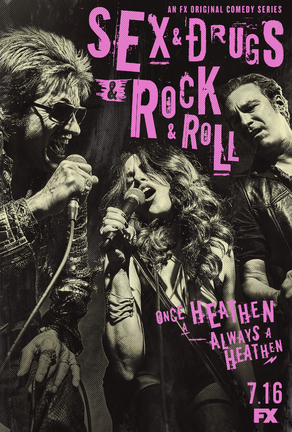 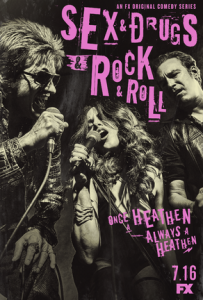 Denis Leary returns toÂ FX with a decidedly different series than his critically acclaimed firefighter drama, Rescue Me. Dysfunction still reigns but this time it’s all about Sex&Drugs&Rock&Roll, a comedy set in New York. The storyÂ focuses on Johnny Rock, a drug addicted has been who could have been legendary but couldn’t quite get his act together. He’s past his prime andÂ he’s pissed off a lot of people, including his former bandmates. He can’t seem to quit his hard livin’ ways either. Can thatÂ all change now that he’s learned he has a daughter who’s all grown up and has a better voice than he ever had? Will Johnny Rock get the comeback he always wanted? And will he prove he can be a good father?

Official Series Synopsis:Â Leary stars as â€œJohnny Rock,â€ lead singer of a legendary early ’90s New York band called The Heathens. Known for living up to their name, the band partied so long and so hard that even Keith Richards thought they needed to slow things down. The Heathens were on the brink of becoming famous for their kickass live shows and the release of their highly anticipated first album. Until they broke up. The same day the album dropped. Because lead guitarist Flash (John Corbett) found Johnny in bed with his wife. So the band became legendary for all the wrong reasons – like self-destructing sooner than any group in rock â€˜nâ€™ roll history. 25 years later the only thing bigger than Johnnyâ€™s ego is his prostate. The drugs he really needs now aren’t cocaine and marijuana – they’re Crestor, Cymbalta and Cialis. He’s out of work, out of money and out of show business options. That’s when a massively talented young singer named Gigi (Elizabeth Gillies) shows up – with a burning desire to be famous, a throwback appreciation for The Heathens only album, and a stack of cash big enough to bring the whole band back into the studio. Only this time, SHE’S the lead singer and Johnny’s just a behind the scenes songwriter. John Ales, Bobby Kelly and Elaine Hendrix round out the rest of this dysfunctional rock and roll family. The race is on to see who gets famous first – and for what reason. Leary serves as Executive Producer along with Jim Serpico. Sex&Drugs&Rock&Roll is produced by FX Productions and Fox 21 Television Studios.

First Impression: GoodÂ music, great laughs and nice performances from the entire cast, but especially from Elizabeth Gillies, who’s a standout not solely because of her acting. She has an incredible voice as well. There are some hilarious rock and pop culture references (although there’s one that’s pretty dated in the premiere) in what turns out to be an addictive comedy that manages to find some heart. Besides the catchy songs, one of the show’s other assets lies in the father-daughter relationship that starts out badly but continues to develop at a satisfying pace. Gigi and Johnny have a lot in common but they also have to wade through a lot of baggage in order to get to a solid place. We’ll be around to see if that ever happens.

TV Goodness recently talked to the Sex&Drugs&Rock&Roll cast at Comic-Con 2015.

Some fun facts: Corbett is also a country music singer; Gillies played Jade on the Nickelodeon series, Victorious; Hendrix was Dennis Quaid’s scheming fiancee in the big screen reboot of The Parent Trap; and John Ales hosted MTV’s early ’90s game show, Lip Service, where two teams battled against each other for lip sync supremacy. Plus, Joan Jett guest stars in the third episode of Â Sex&Drugs&Rock&Roll. The seriesÂ premieres tonight on FX at 10/9c.

Quick Takes: Gotham’s Barbara is Back in “The Fear Reaper”

Countdown to Supernatural: Fun with Titles