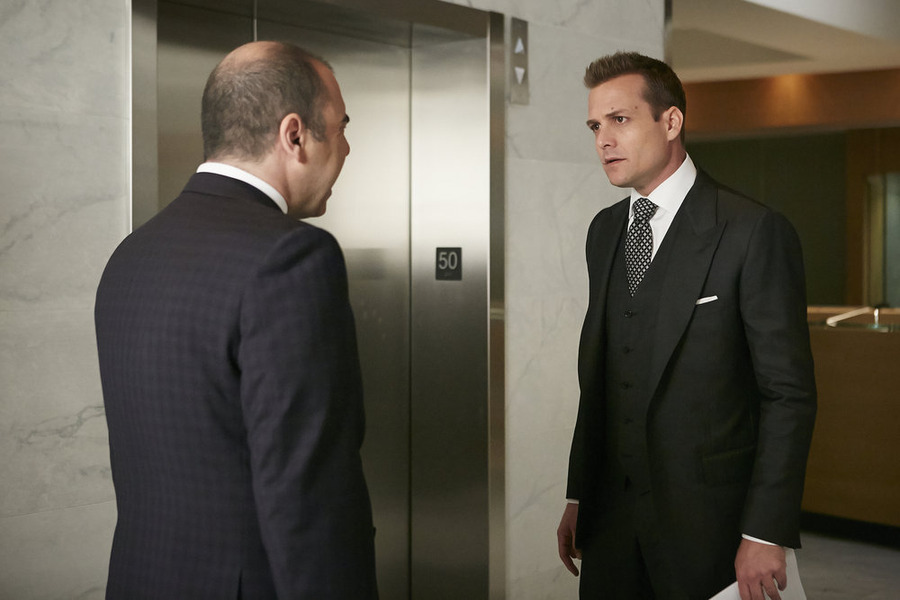 Harvey’s seeing a therapist for his panic attacks in the wake of Donna’s defection to Louis. We’ve never seen a Harvey Specter this unraveled. It’s unsettling to see him so unsettled. He’s letting things fall through the cracks. He’s trying to keep his Harvey Specter tough guy mask on as firmly as possible but it isn’t working. Ultimately, he throws away the anti-anxiety meds his doctor gave him. Not sure what that’s going to mean for his psychological future.

Meanwhile, things are good with Mike and Rachel. Rachel’s going above and beyond to help out Harvey and Mike has her back. He makes sure Harvey doesn’t crucify her for a clerical error that had some major ramifications.

And then there’s Donna and Louis, adjusting to their new situation. They’re a team now and Louis understandably can’t completely give in and trust the fact that Donna isn’t going anywhere. For now, the two remain boss and assistant. They come up with their own ritual and that leaves Harvey to find a new assistant.

Will he be able toÂ pull his s–t together and hire one? We’re about to find out. It also seems like trouble’s headed Mike and Rachel’s way in the form of her father.

Harvey searches for a replacement for Donna.

Mike takes a case as a favor, which he must justify to Jessica – while Rachel’s father, Robert Zane, offers some unsolicited advice about Rachel’s engagement to Mike.

And Louis is embroiled in surprising money matters, while an up-and-coming partner, Jack, makes his presence known to Jessica, confronting her about whether Harvey’s way of doing business is beneficial to the firm.

-It’s episode two and already someone’s gunning for Harvey. In the universeÂ of Suits, someone’s almost always gunning for Mr. Specter. He’s like a magnet for trouble. Here’s hoping for Team Jessica and Harvey against the world. Let’s hope the source of said trouble (Jack)Â doesn’t get to inflict too much damage.

John Pyper-Ferguson: “Itâ€™s kill or be killed kind of acting, and instead of getting along with everybody, youâ€™re actually out to destroy the other character in front of you â€“ who is also potentially your friend â€“ just because you want to get a little higher up on the ladder and make some more money. Itâ€™s super fun…”

The actorÂ talks more about Suits as well as his other summer gig — TNT’s The Last Ship here.

-Rachel’s dad is back so that means we’re getting more quality time with Wendell Pierce. The action always gets more…intense…when Robert Zane’s around. And now that Mike’s engaged to Robert’s daughter, there’s always the chance that he might find out about his future son-in-law’s not so well kept secret.

-According to The Hollywood Reporter, Harvey’s new assistant will be played by Scrubs alum and current Days of Our Lives actressÂ Aloma WrightÂ (She plays Maxine on Days). We’reÂ anxious to find out what kind of influence she has on Harvey’s life once she becomes his gatekeeper.

-We’re super curious how the whole Harvey/Donna/Louis dynamic is going to play out in this second episode of Season 5. From the look of this week’s episodic photos, the show isn’t shying away from scenes featuring either Harvey and Donna or Harvey and Louis. Something tells us we’re in for a bumpy ride. 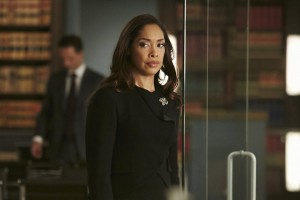 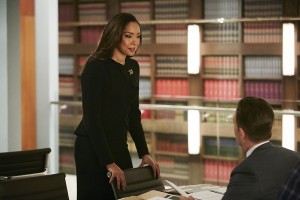 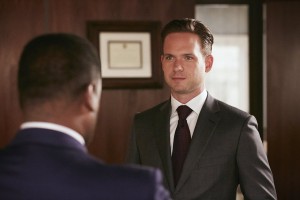 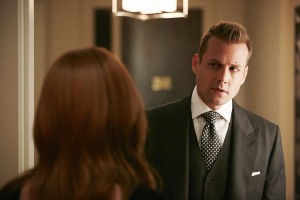 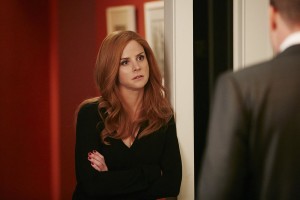 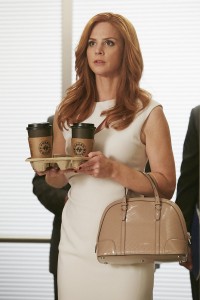 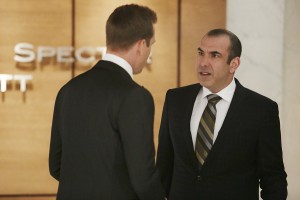