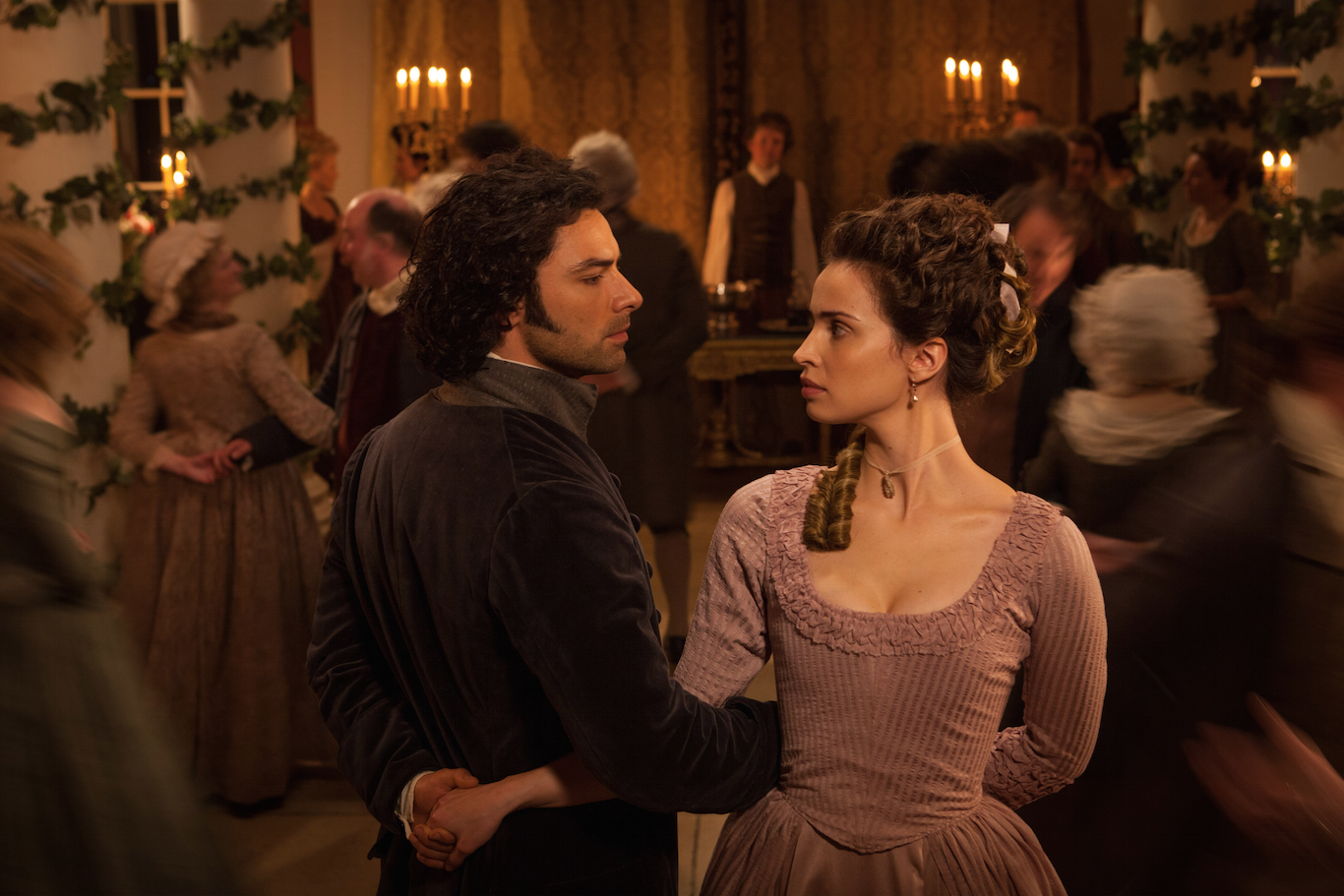 Scrumptious! Aidan Turner causes a few waves and heats up the cold waters off the Cornish Coastline in PartÂ 2 of Masterpiece: Poldark. Why you might ask? Iâ€™ll get to that later.

Still a bit unsettled, but determined to make a life for himself in Cornwall, Ross comes across the deed to his fatherâ€™s mine, Wheal Leisure. This happens as news of another local mine — Wheal Reath — closes its doors due to the cold-hearted bankers, Cary Warleggan (Pip Torrens) and his nefarious nephew, George (Jack Farthing). The two call upon Lord Bassett to pay up. Unable to live with his conscience, Bassett kills himself.

Meanwhile, Jim Carter (Alexander Arnold) and other miners are left to fend for themselves. Fortunately for Jim, Ross decides to take him on as a farm hand.

If anyone has resolve, itâ€™s Ross Poldark. He hops on his horse and rides off to Trenwith. Ross wants answers. His Uncle Charles (Warren Clarke) admits that almost everyone in Cornwall, including himself is in debt to the Warlegganâ€™s. Keep in mind, Ross is his own man and will answer to no one, especially George Warleggan. He decides to see if thereâ€™s any way to reopen Wheal Leisure. In fact, he makes Francis (Kyle Soller) an offer to join him in this venture.

Meanwhile, Verity (Ruby Bentall) asks Ross to accompany her to the Annual Ball. Oh what a night it turns out to be for everyone in attendance. As Ross enters the room with his cousin on his arm, she offers him sage advice.

Verity: â€œLook to your Liberty cousinâ€

Ross: Â â€œIs it in danger?

Verity: Â â€œFor a great many girls would like to acquire the name of Poldarkâ€

As Ross mingles, Verity is about to find the key to her own happiness. Captain Andrew Blamey (Richard Harrington) approaches her and makes his intentions known. During the evening, the two talk and find themselvesÂ falling madly in love; however, Blamey is hiding a dark secret.

Bored and bold, Ross asks Francis if he can dance with his former love, Elizabeth. For some reason, Francis agrees. Ross and Elizabeth (Heida Reed) share an intimate moment on the dance floor, stirring up gossip and causing Francis to become insanely jealous.

Verity warns Ross to put his feelings for Elizabeth in his past and move on with his future.

Frustrated, Ross finds himself in the company of Margaret (Crystal Leaity) the town prostitute.

Returning from his tryst with Margaret, Ross strips down and swims naked in the water below the cliffs off the coast of Cornwall. Demelza looks on from above. If you think Demelza was delighted, so was I, along with many other fans! Who wouldnâ€™t turn down a chance to gaze at Aidan Turner in his birthday suit â€“ Hot â€“ Hot â€“ Hot! Whew!

Returning to the story, Charles drops by Nampara, encouraging Ross to take Francis under his wing. Ross agrees; however, under the influence of George, Francis has a change of heart and decides not to take part in the venture.

Ross calls a meeting with Captain Henshawe (John Hollingworth) and other possible investors in hopes that they will back his idea and reopen Wheal Leisure. With a little prodding, everyone agrees and toasts to a prosperous future!

Just as things are looking up for Ross, Francis and Charles arrive at Nampara to confront Verity and Captain Blamey. The two have been secretly meeting there and planning their future together, but everything goes downhill from here.

Charles finds out about Blameyâ€™s past as an alleged killer, scolds Ross and forbids Verity from ever seeing the man of her dreams again. Francis, driven by anger and jealousy towards Ross, challenges Blamey to a duel. Cool heads do not prevail and the two meet outside. One gunshot later, Francis is on the ground, bleeding.

Ross and Demelza manage to save his life, but not the budding romance between Verity and Andrew. The star-crossed lovers must say goodbye.

Furious, Charles blames Ross for the entire incident; however, when Elizabeth arrives, she expresses her gratitude towards Ross for saving her husbandâ€™s life. This is when she tells Ross thatâ€™s she pregnant with Francisâ€™ child.

Duped again, Ross confides in Demelza. Not one to sit back and wait for fate to step in, he orders, Demelza, Jud (Philip Davis) and Prudie (Beatie Edney) to get to work. While Ross and Demelza share a quaint moment at the mine, he offers Demelza a chance to return to her family, but she turns him down.

Things to think about:

1. Now that Elizabeth is pregnant, whom will Ross turn to for comfort and where will it lead?
2. Will Ross be able to get Wheal Leisure up and running again?

While youâ€™re waiting for the answers, hereâ€™s your chance to go behind-the-scenes.