Penny Dreadful Preview: “And Hell Itself My Only Foe”

I almost want to tell you to wait and watch this episode of Penny Dreadful right before the season finale next Sunday because CLIFFHANGER OMG CLIFFHANGER.

Ahem. The episode sets up and begins the epic battle as all hands are on deck and reunited in London following a showdown at the Cut-Wife’s cottage. Ethan has important conversations with Sembene, Hecate, and the Inspector, Lyle has a chat with the team, and Vanessa makes a decision. While all that’s going down, Lily is educating Dorian and John’s trust betrays him in a way that I saw coming but still DO NOT WANT for him.

I sort of thought we might get to the war in this episode and have the epitaph next week, as we did in the first season, and it’s entirely possible they’ll resolve everything in the first act of the finale. I kind of hope they do. But we’ll see. The journey toward it is wickedly suspenseful. 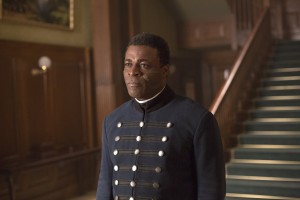 Meet the Synths: The Cast and EPs of AMC's Humans Introduce Us to the Next Generation of AI