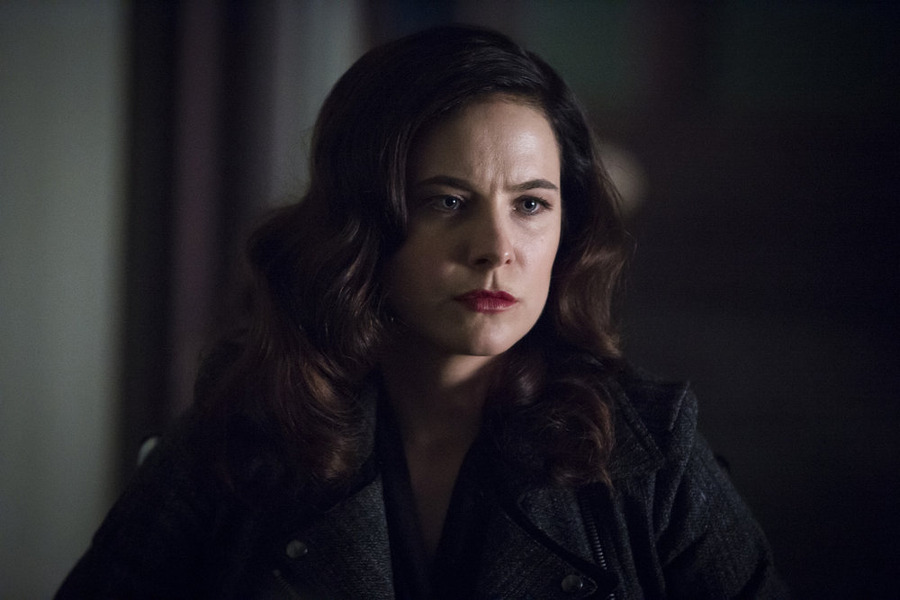 Hannibal continued its mostÂ stylistic season yet by slowing down and playing catch up in “Aperitivo.” The fates of Will, Abigail, and Jack were revealed in the first three episodes. Episode 4 was dedicated to the other victims of Hannibal: Alana, Dr. Chilton, and Mason Verger.

Alana may haveÂ only been gifted with a limp and cane for walking after falling out of Hannibal’s window, but her emotional and mental wounds have drastically changed her. She’s tougher and more cynical. Alana isÂ looking for revenge against Hannibal, and she’s willing to let Will be the one to lead them all to him.Â The use of red in Alana’s appearance is a nice touch. Whether it’sÂ in her lip color or coat. The old Alana would have worn simpler, more muted tones. The new Alana is bolder.

Alana: “Forgiveness isn’t all it’s cracked up to be. I don’t need religion to appreciate the idea of old testament revenge. “

It’s a welcome change of pace for Alana to be able to manipulate and help facilitate the revenge on Hannibal. It was incredibly frustrating last season to watch her be intimate with Hannibal; unaware of who he truly was. Obviously that couldn’t be helped because, as the audience, we’re gifted with knowledge about Hannibal that her character didn’t have.

Other members of Team Revenge include Dr. Chilton, who survived the gunshot wound to his face, and Mason Verger, whose face is far more disfigured after…. well cutting his own face off after Hannibal drugged him. Chilton is the man who rallies the victims together. His visit with Verger provided an honest moment for him when they both revealed the ugliness Hannibal left on their faces.

Chilton wants the glory of having Hannibal, or should I say Hannibal the Cannibal, and having him back at the hospital. Chilton may be a self-serving man, but he’s the most observant. He wanted Will to find Hannibal, but he also knew that Will had already fallen into Hannibal’s shadow. The darkness surrounding Will’s connection to Hannibal will get him killed.

Alana and Verger, on the other hand, are out for some good, old-fashioned revenge. Joe Anderson has taken over the role of Verger that was played by Michael Pitt last season. Verger’s desire to eat Hannibal doesn’t seem surprising. It’s probably his twisted version of a catharsis. Alana hasn’t fully stated what she wants to become of Hannibal, but she’s playing with both Chilton and Verger to get what she wants.

The immediate aftermath of the attack left Jack defeated by his work, but devoted to his dying wife. The sequence of him being by her side as she died was beautiful. No dialogue was used, and I’m glad. Nothing needed to be said in that moment.

Now that his wife is gone, Jack understands he needs to save Will, not just from Hannibal, but from himself. Will’s reveal to Jack that he called Hannibal that night because he wanted him to escape was a powerful moment for Jack. In that moment, he realized just how intertwined Will’s soul is with Hannibal.

Will: â€œAÂ mutually unspoken pact to ignore the worst in each other to continue to enjoy the best.â€

Will is an intuitive and brilliant man who can’t seem to see Hannibal as just a monster. They developed a relationship that can’t be explained. Despite all the horrible things Hannibal has done and will continue to do, he can’t seem to shake him.

Before I wrap up this review, let’s address the cancellation. I’m not surprised by the news, but it is my hope that Bryan Fuller will explore other avenues for the show to continue.Â Hannibal never felt like it belonged on NBC. No offense to the peacock, but they aren’t exactly swimming in artistic, thought-provoking dramas.

While the show’s creative aesthetic looks expensive, it’s actually a cheap show for NBC due to the show’s foreign production company. What did the show in were the low ratings. Had this series aired on AMC, Sundance, or HBO, the lower ratings would have factored in differently.

If the show doesn’t find life on another network or digital platform, I hope this season wraps up in a way that won’t leave the audience starving for more.

– What is Will’s endgame with Hannibal?

– Has Will always been into boats? Is this a thing I don’t remember?

– Can Jack save Will from Hannibal?

Check out a sneak peek of the next episode titled “Contorno.”

The Heart of the Matter: Bohannon and Ruth in Hell on Wheels “Thirteen Steps”