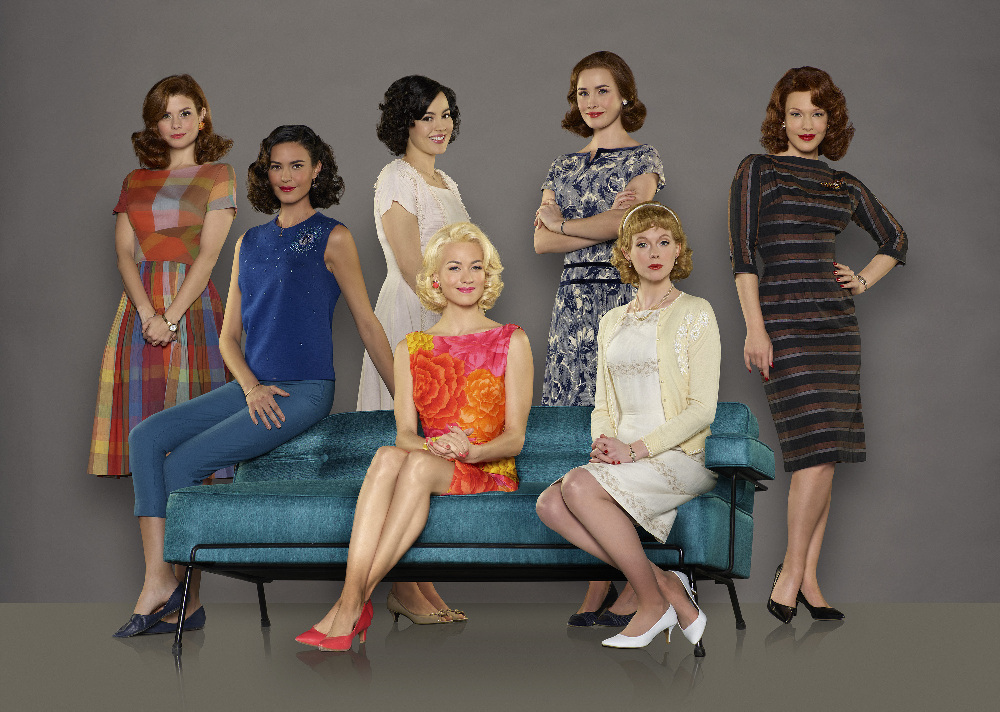 The Astronaut Wives Club launched onto television last week and this summer series looks to be a fun fling full of nostalgia for the 20th Centuryâ€™s greatest pioneers. LIFE Magazine had exclusive access to the astronauts and their wives and helped make the space families American royalty.

The series premiere got right in to introducing us to all the astrowives but focused on Louise Shepherd whose husband, Alan Shepherd, was the first American to travel into space.Â When I started watching this show, I was expecting a group of dramatic, catty women. And while the ladies are certainly portrayed as being competitive with one another, they quickly showed themselves to be supportive and protective of each other.

The episode starts with Louise walking into her husbandâ€™s office with a message from NASA, and finds him sitting very close to his beautiful secretary who gives Louise the stank-eye for interrupting them. This small exchange foreshadows whatâ€™s coming only a few scenes later when Louise is humiliated by her hubbyâ€™s wandering eye. The wives decided to surprise their husbands who are working and living in Cape Canaveral and when they arrive, Louise sees Alan with his arms around an astronaut groupie. Ever stoic, Louise puts on a happy face while her fellow astronaut wives look on.

Louise later tells her husband that despite everyone telling her to stay away from him, she married him anyway. And to never humiliate her in public again.

Soon, the Shepherds and the other astronaut families learn that Alan Shepherd will be the first of the Mercury Seven to be sent to space. Publically, Louise smiles and is the picture of the perfect, poised wife. But when she watches her husband being launched atop the biggest firework in America, she does so alone after turning the other wives away. Only the LIFE magazine reporter, Max Kaplan, observes her terrified vigil in front of the TV. After Louise pulls herself together, she manages to expertly speak to the press who never knew her fears.

Louise opens up a little more to the other wives after her husband lands safely on Earth, but doesnâ€™t let on that she was scared or ever had any doubts. And her husband is back to his shenanigans down in Cape Canaveral â€” where it seems heâ€™s not the only astronaut with a roving eye.

The episode ends with the wives throwing an impromptu late-night party at Trudy Cooperâ€™s when the phone rings. Gus Grissom is on the other end and tells his wife Betty that he will be the next man in space.

The wives celebrate the news together and I am reminded that these are real women and that is what I love about this show. At first blush, I was thinking this was going to be Mad Men meets the ladies of Wisteria Lane (which actually would be a great hour of television). And there is some of that, but what is ever-present is the knowledge that these women are real people â€” those that are still living are my Grandmotherâ€™s age. My sweet and sassy Grandmother, Annie Lou, is 92, and probably read the LIFE Magazine cover stories on all these ladies and watched her black and white television when all these events took place. That said, itâ€™s a lot different to write about this show and what I think is happening or going to happen, or what I think about the â€œcharactersâ€ because they arenâ€™t just characters.

Four of the ladies are deceased but three of them are still living. Betty Grissom, is one of those living original Mercury Seven astronaut wives and this week, The Astronaut Wives Club will focus on her as her husband Gus prepares to take flight in the second episode titled, “Protocol.”

Synopsis for “Protocol”:Â As Louise and Alan Shepard bask in the success of his mission, Betty Grissom preps for Gusâ€™ launch and turns to Louise for advice. And Annie Glenn grapples with her stutter, anticipating that the press will want to hear from her after Johnâ€™s orbit is completed.

The Astronaut Wives Club airs Thursdays at 8/7c on ABC.