This Is My Least Favorite Life, True Detective “The Western Book of the Dead” 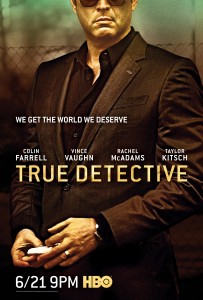 While I loved last season’s focus on two protagonists, Iâ€™m enjoying this foursome in a major way so far. This anthology series is essentially a procedural cop show with some not-so-procedural elements. The first season focused on murder, religion and mysticism inÂ theÂ Louisiana bayou. This year seems like a pretty straight-forward corruption scandal with a side of murder. Weâ€™ve got three cops investigating the death: Ray Velcoro, a corrupt cop; Ani Bezzerides (and her partner Elvis), with Ventura Sheriffâ€™s CID and CHP officer Paul Woodrugh. The fourth is Frank Semyon, a criminal trying to go legit.

Is Vinci the most corrupt city in LA county? Writer Dan Howser has published part 1 of an 8-part piece in the local paper and itâ€™s riled Semyon up. With the passing of Prop 1 in California, the state is on track to build a high-speed rail system in Central California.

What does that mean for Frank and his associates? A lot of government money that will legitimize him and his partners and make them extremely rich men. The problem? City manager Ben Caspere is missing. He was a key piece in the puzzle because he controls the purse strings for a lot of the departments in Vinci District.

If Vinci is corrupt â€” and whether or Howser is working on this story, it’s clear that accusation will be proven eventually â€” Caspere had a big part in that. But who wants him dead? Why did they leave him on the side of the road to be discovered like that? But maybe most importantly, why did they burn his eyes out and cut his penis off (if the blood we saw is any indication of his â€œsevere pelvic woundâ€)?

Whatever the details of his murder and a looming scandal, Iâ€™m most interested in the people working this case. I mean, I love a good tale of corruption and murder, but I canâ€™t wait to get to know these incredibly damaged people better.

Surprisingly (or not), the criminal seems to be the most well-adjusted. Heâ€™s in a great relationship, theyâ€™re trying for a kid and heâ€™s getting his business interests in order. This Ben Caspere thing has definitely thrown a wrench in his plans, but it seems like things can go forward with or without Ben. And now that Rayâ€™s gotten all of Howserâ€™s notes and handed them over to Frank, it doesnâ€™t seem like they need to worry about an expose coming back on them. But Frank’s number one problem might be with his associates. If they don’t sign on, it’ll cause trouble.

Ray Velcoro â€œwelcomes judgement,â€ but if anyone in authority were to take a serious look into his past theyâ€™d discover his misdeeds pretty quickly. Heâ€™s got a kid who may or may not be his biological son. Rayâ€™s not worried about that detail, but since heâ€™s trying to get more visitation rights, the court will be.

Back when his wife was attacked and raped and the police had absolutely no leads, Frank stepped in and found the identity and location of the attacker. Ray wanted to know what that information would cost him. Since heâ€™s now on Frankâ€™s payroll and an addict, that cost seems clear.

He thinks heâ€™s got a great relationship with his son, but he bullies Chad and threatens to beat him in front of others. Ray clearly isn’t shy about resolving issues in a violent way, which I’m sure benefits Frank and his interests. I think the best thing for that kid would be no contact at all with Ray and Frank is clearly starting to worry about Ray’s mental and physical health.

Although Paulâ€™s technically not on active duty, heâ€™s the one who finds Ben’s body after what seems like a suicide attempt. So, I guess he’ll be on this case. He’s got burns from beforeÂ his time in the Army, so he had to have gotten them when he was a kid or teenager. He wonâ€™t tell his girlfriend the story and he wonâ€™t spend the night at her place. He seems like keeper.

What will these 3 bring to this case?Â Ray’s involved because Ben was a missing person in Vinci. Ani’s on the jobÂ because the body was found in Ventura. Paul found the corpse, so I’m assuming they’ll let him participate. Will they be able to work together? Will Ray put Frank’s interests ahead of finding out what actually happened? What will we learn about these characters as the investigation progresses?