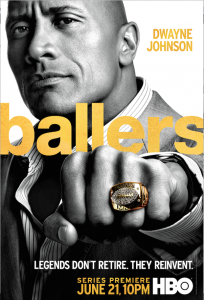 Dwayne Johnson takes a momentary break from the big screen superstar he’s become to grace us with his massiveÂ presence on a new HBO series. In Ballers, he plays Spencer Strasmore, a retired NFL pro who strugglesÂ with life after football. Spencer’s a financial manager who can’t quite manage to turn his high profile friends and contactsÂ into clients. He has no choice but toÂ up his game, which often means dealing with unpredictable athletesÂ who do unpredictable things on and especially off the field.

HBOÂ Synopsis:Â Spencer is a retired football superstar who is trying to reinvent himself as a financial manager for current players in sunsoaked Miami. His inner circle includes Ricky, a talented but volatile wide receiver who seeks to balance his off-field antics with his passion for the game; Charles, a reluctantly retired lineman who’s finding it hard to adjust to civilian life; and Vernon, a player with a rookie contract, whose promise never to forget â€œwhere he came fromâ€ brings scores of hangers-on into his life, and lands him in big financial trouble. Though they’re pros when it comes to playing the game, each one has a harder time navigating life off the field.

This is the NFL in Miami so expect cameos. The premiere pays homage to the Dolphins with an appearance from a couple of Dolphin legends, Don Shula and Larry Csonka.

Working behind the scenes as one of the show’s executive producers and taking a role in front of the camera is Peter Berg of Friday Night Lights fame.

First Impression: there’s a lot of flash and fireworks in this first episode but by the end of the half hour, there’s just enough substance to hook us. Johnson’s character is likable — consider us on board as he tries to reinvent himself and succeed off the field. Looks like it’s going to be an uphill battle.

This Is My Least Favorite Life, True Detective "The Western Book of the Dead"