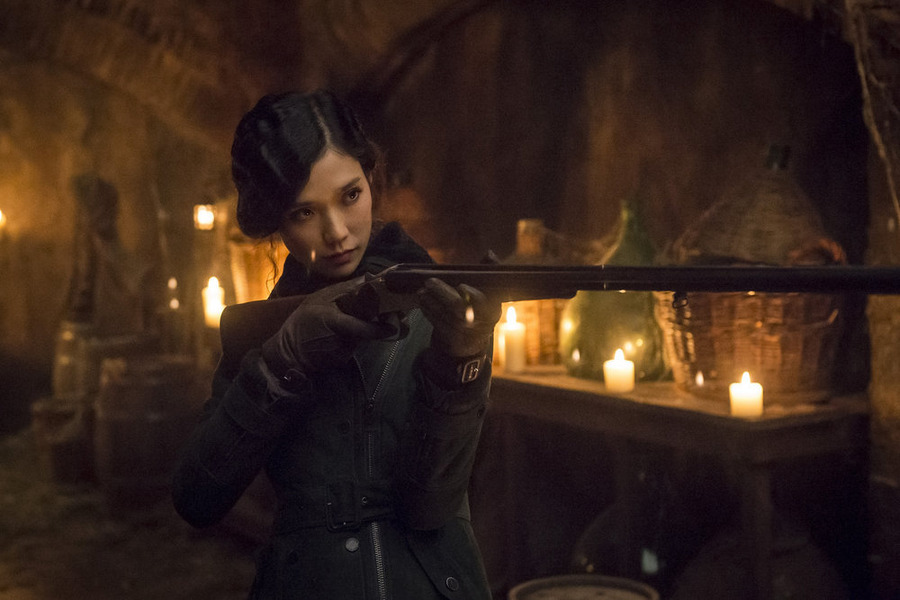 HannibalÂ has been a slow burn thus far this season, but it’s time to up the ante. “Secondo” proved to be another vivid episode, but it also managed to move the plot along by introducing us to a new character. Nice to meet you Chiyo. Please don’t point your gun at me!

Will’s journey to Hannibal’s childhood home, which was a tad too The Haunting for my liking, proved to be informative of just how powerful Hannibal’s influence can be. Instead of finding Hannibal’s family, Will met Chiyo. She had been tasked by Hannibal many years ago to guard the man who supposedly killed and ate his sister, Mischa.Â Chiyo defended Hannibal’s decision to keep this man prisoner, and his transition into a cannibal.

Chiyo: “He does what was done to her.â€

Will couldn’t let that reasoning go. Mischa being eaten by a cannibal doesn’t give Hannibal the right to do the same to others. Where is the logic in that? Besides, Will knows that the man held prisoner for all those years was simply a substitute for Hannibal himself.

Will (and Bedelia) surmised that Hannibal killed and ate his sister, but placed the blame on another man so he could go on. Will let the prisoner go only for him to return and attempt to kill Chiyo. When she killed him, she set herself free. Free from having to spend her days watching over a prisoner, but also free from Hannibal’s control.

Now that she had agreed to help him find Hannibal, Will left quite the gift for Hannibal. The sight of Will stringing up the prisoner like a butterfly (orÂ dragonfly, or moth) was disturbing. He’s clearly doing it to get a rise out of Hannibal, but there’s always that fine line Will walks between sanity and falling over the edge.

Meanwhile, Hannibal and Bedelia held yet another charming dinner party where Hannibal stabbed Professor Sogliato in the head. However, Sogliato didn’t die immediately. The area of the brain punctured prevented him from feeling pain, making him giggle, and took away his sight.Â This was all too much for Bedelia to take so she finished the job for Hannibal (and herself).

A part of me wonders if Hannibal yearns to be caught. He’s losing his self control. He’s acting on impulse, and that’s a recipe for disaster. Bedelia is positive she will find a way out of her situation, but Hannibal’s impulses may just lead to her demise.

Bedelia was also not afraid to test her boundaries with Hannibal. She allows him to wash her hair as she bathes, and feels free to share her thoughts on Hannibal’s past. She may be his guest/captive/fake wife, but she’s also still acting as his therapist.

Bedelia: “How did your sister taste?”

Hannibal claimed that he was able to forgive his sister for her influence on his development. Her influence made him betray himself. Bedelia knew where this was all heading. In order to forgive Will for his betrayal, Hannibal must eat him.

It would be daring and provocative for the show to actually have Hannibal succeed in murdering and eating Will. I just don’t think it will happen.

Time to check in with Jack, who’s alive! Jack made his way to Palermo following Will. His conversation with Pazzi didn’t reveal how he survived that brutal attack. Instead, they talked about Will, and Pazzi tried to convince him to join him in stopping Hannibal once and for all.

Jack’s concerns no longer involve Hannibal. Jack made some huge mistakes with Will, and now it’s time to own up to them. Jack was complicit in believing Will was a killer. He also put Will in those crimes scenes where his mind was pushed too far.

Now that Jack has made an appearance, it’s time for Alana to show up. More than that, it’s time we learned what happened in the immediate aftermath of that brutal night.

– No seriously, what the hell happened to Alana?!

– Will Hannibal slip in front of the wrong person?

– Can Will trust Chiyo after she spent so much of her life doing what Hannibal asked of her?

Check out a sneak peek of the next episode titled “Aperitivo.”

The Strain “For Services Rendered”