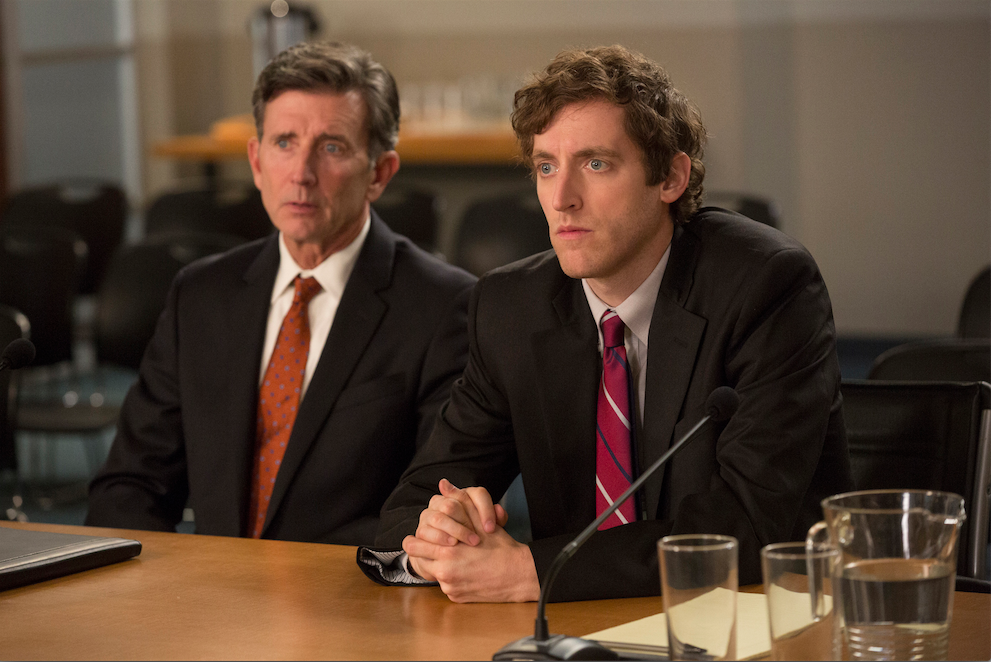 HBO’s Silicon Valley does it again. Whatever algorithm they use to make awesome finales — can they pass it along?Â They’d make a lot of money if they shared it with the rest of Hollywood’s players in the TV universe.

Last week, the Hooli lawsuit against Pied Piper ends up in binding arbitration after Big Head comes through big time for Richard. He hands over a phone that contains the error-filled prototype for Nucleus.

With encouragement from his friend who now owns a sweet boat, Richard tries to leverage this info to get rid of the lawsuit altogether. But Gavin Belson doesn’t give in. TheÂ Richard vs. Gavin negotiation involves their attorneys as well asÂ the rivals tryingÂ to get their points across in a way that doesn’t get them in trouble. No threats — sexually or otherwise — are tolerated, although Belson tries his best. He can be very descriptive when he wants to be. All in all, it’s sort of a win for both sides because binding arbitration speeds things up and this matter can be settled sooner rather than later.

Richard’s legal help for the arbitration comes in the form of Matt McCoy’s hot mess of an attorney, Pete Monahan. The guy has a criminal past that deservedly earned him time behind barsÂ and a disbarment. This is his opportunity to get a second chance and his interactions with Richard and, especially Erlich, are fun.

After Hooli does the whole document dump and sends hard copies of everything to Erlich’s incubator, a big revelation occurs that hurts the case. Richard tells Pete he hasn’t had a girlfriend in over three years. But when Pete finds documentation that heÂ referred to a girlfriend in several email exchanges with Big Head, Richard says that was a joke. Girlfriend is code for his laptop. Pete immediately realizes Richard and his company are screwed. Because there was a three-day period when Richard’s “girlfriend” was in the shop (i.e. the Apple store). So when he talked about performing some sort of test, he had to do it on a Hooli computer. This means Belson can claim intellectual property on his compression algorithm. See? Screwed.

Meanwhile, the Schrodinger’s Cat theory once again gets TV tested. And it all starts with Jared and his fascination with that Mother condor and her egg. Pied Piper’s cameras aren’t capturing much of anything. MamaÂ condor hasn’t visited her egg in a while so Jared thinks something might be wrong with it.Â Should Jared alert the museum? Man, anytime this theory works its way into a storyline, it gives us a headache, but Silicon Valley manages to make the whole Plot B storyÂ glorious.

Of course, things go wrong after Jared bites the bullet and calls the museum. The museum decides to take the cameras down since nothing’s happening. When the tech goes out to take them down, he falls off the cliff. See what Jared has done? If he had just left things alone…

At the arbitration, Hooli’s big move is to bring Big Head to the stand. He comes off very likable and the way Pete counters that is to put Erlich on the stand, even though he originally balked at the idea. But instead of letting Erlich act as their secret weapon, Pete humiliates him instead. And during this humiliating testimony, Erlich lets the (non-Schrodinger’s) cat out of the bag — the laptop was in the shop. Boo, Erlich. Boo.

Hooli capitalizes on this bonehead move and questions Richard, who can’t lie.Â This leads us to tonight’s stellar finale:

Synopsis for “Two Days of the Condor”: As the guys await the verdict on Pied Piperâ€™s fate, an unexpected real-life drama draws a spike in traffic to their livestream and leaves them fighting to hold things together â€“ literally. While Erlich considers his future, Richard scrambles to save Pied Piperâ€™s. Written and directed by Alec Berg.

-Expect what’s been happening all season long — a lot ofÂ twists and turns and ups and downs.

-Erlich deals with a life-changing dilemma. He also steps up in a surprising way.

-The condor egg livestream becomes an event and Jared, Dinesh and GilfoyleÂ work together to keep things from going south

-By the end will the boys celebrate or crash and burn?

Power "No Friends on the Street"