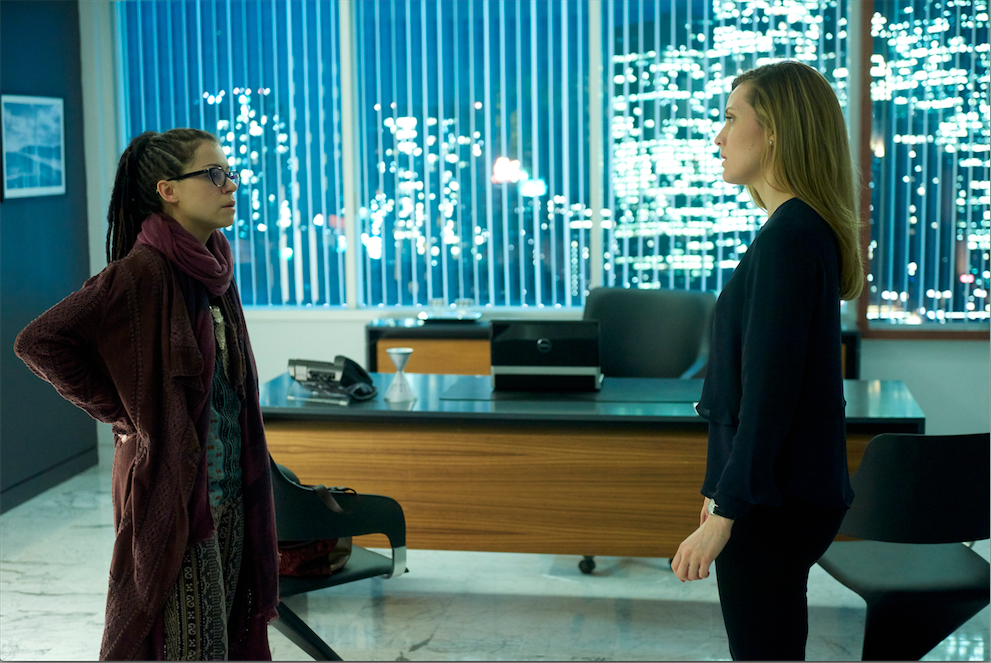 Thereâ€™s just no trust anymore. Basically thatâ€™s what we learned in â€œRuthless in Purpose and Insidious in Method,â€ where everyone was playing a double agent role and everyone ended up getting screwed. All except for Krystal Goderitch, the latest Leda clone who is unaware of the conspiracy swirling around her. Yet, Leda hasnâ€™t forgotten about her and Krystal unknowingly becomes a pawn in a strategic game played by Rachel.

Another score for Tatiana Maslany and her amazing prowess with these characters. Krystal is bright, guileless, and a breath of fresh air as we step outside the Leda-Castor war to get to know her. Krystal is dealing with some major PTSD after the Castor clones tried to kidnap her and murdered her boyfriend (read: monitor). Traumatized and suspicious, she unloads her story to anyone who will listen, including Delphine doing some recon on Krystal. Later on, Krystal also recants her story to Felix, play-acting as straight and American to snag Krystalâ€™s ID. More on exactly why Felix needs her ID later, but Felixâ€™s heart melts a little at her heartbreak and he gives her a small amount of comfort while keeping her out of the drama.

Back at Dyad, Cosima makes the somewhat questionable move of letting her new girlfriend Shay into their secret lab. Sure enough, Shay just happens to get her hands on Dr. Duncanâ€™s magic book of clone secrets, still hidden from Delphine. She doesnâ€™t keep it but it’s a little telling that just happens to be the first thing she finds. Delphine wanders in and pulls Cosima away to go over the latest test results. Bad news: Cosima isnâ€™t getting better as hoped. As exes do, Delphine and Cosima have a hot moment over trying to untangle possible solutions and save her life. For a minute, youâ€™re reminded why these two were such a great couple. But itâ€™s short lived as the reality of their situation sinks in. Delphine has an agenda and Cosima canâ€™t get on board to trust her. Why should she?

The real focus of this plot-heavy episode had to do with getting Duncanâ€™s book decoded by Rachel. Scott, after figuring out Rachel can read it, manages to get Rachel and Sarah face to face via laptop. Awkward! Rachel works out a deal: get her out of Dyad and out of the country and sheâ€™ll decode the whole book. Assuming the book has the key to unlocking cloning, thatâ€™d be a major score for Leda. Not Dyad, just Leda. Except one big clone-y problem mucks up their plans. Rudy shows up at Scottâ€™s door and threatens his cat. Wonder how Rudy and Team Castor found out about the code and the book, hmmm? Losing the original book and working now from a copy, the plan is kicked into high gear. Felix and Sarah head to Krystal to snag her ID so Rachel can have a way out of the country.

Using Scott and his gamer-buddies as a way out, Rachel wheels her way out of Dyad and over to Mrs. Sâ€™s. Meanwhile, Cosima is resigning her post at Dyad. Sure, Delphine now knows about the book and that Cosima hid it from her, but maybe they can work through it to save Cosimaâ€™s life? Doesnâ€™t seem like it.

Back at Mrs. Sâ€™s, they have one decoded page of the book, which points to the original Castor being in London. Before they can get too much further, Dr. Nealon bursts in with a crew of Dyad cronies. Uh oh, looks like Dephine was playing them and knew a copy of the code existed somewhere. Rachel cries out in protest, only to be racked by a seizure and in need of Dyad medical help. Now Castor has the original book, Dyad has a copy and what does that leave Team Leda? A clue to head to London and a whole lot of nothing.

The real winners in this game of Who Can Play Who are revealed to be Rachel and her cohort Dr. Nealon. While Felix was playing Krystal and Delphine was playing Cosima and Scott, Rachel was playing everybody. You would have thought that pencil impaled in her eye would have touched on a nerve of something resembling redemption but nope, sheâ€™s as conniving as ever. The whole charade was to get her away from Delphine. While Delphine may have a copy of the book, itâ€™s useless without Rachelâ€™s help. Dr. Nealon kidnaps Krystal and leaves her in a coma to masquerade as Rachel, while Rachel heads abroad for reconstructive surgery with no one aware sheâ€™s gone. Rachel shoves Dyad into a waiting game until â€œRachelâ€ is out of her coma. You clever, evil little minx.

-The loss of Rachel and her ability to decode the book push Delphine into a rage. She fires both Cosima and Scott on the spot. Itâ€™s seemingly the last straw for Cosima and Delphine. Theyâ€™re firmly rooted on opposite sides now. But not before Delphine reveals whatâ€™s been obvious all along: Shay is actually a spy.

-Helena and Gracie are shacking up with Donnie and Alison to help with the booming soap business. Is it just me or is there some weird sexual tension brewing between Helena and Donnie? I think â€œBaby Oxâ€ may be my new favorite pet name.

-Jason and Donnie have a confrontation that doesnâ€™t go so well for Donnie. Meaning he had his ass handed to him in the stockroom of their store. That little love triangle got sharp awfully fast, didnâ€™t it?

-Krystal deserves another honorable mention for Moment of Goodness. She better be out of that coma and in the mix fast because I canâ€™t wait to see her interact with the other clones.