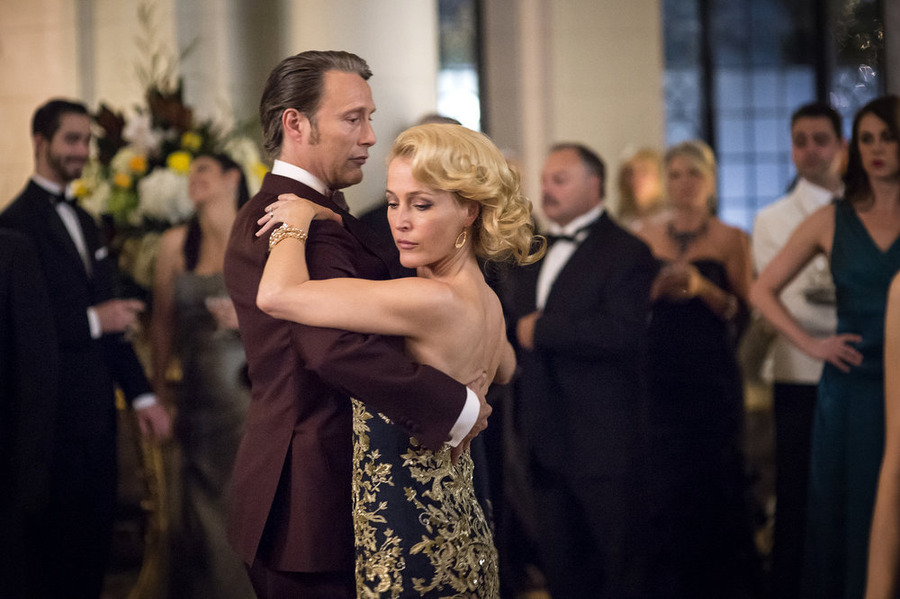 Bonsoir everyone! Welcome back to the world ofÂ Hannibal where imagery can often times be more important than the dialogue itself. When we last saw Dr. Lecter, he had hopped on a plane with Bedelia after leavingÂ several lives hanging in the balance, including Will, Alana, Jack, and Abigail. In an intriguing and masterfully crafted season opener titled “Antipasto,” we didn’t learn the fates of Hannibal’s victims. Instead, we caught up with Hannibal and Bedelia in Europe.

Hannibal has always stood a head above the rest of what TV has to offer due to its dreamlike quality. The color palette is always rich, but dark. The score is beautiful, but foreboding. The surrealist sequences are, well, surreal. No other show on television could make the preparation and presentation of human body parts into a meal something lavish and, dare I say it, delectable looking.

The gorgeous imageryÂ has played a large part in the show from the very beginning. Most of the murderersÂ Will came across managed to turn their merciless killings into works of art. However, this premiere seemed to highlight the importance of visuals more than before.

Bedelia: “You no longer have ethical concerns, Hannibal. Only aesthetical ones.â€

Close up shots of blood dripping, champagne bottles being opened, and water dripping from a faucet become moments of significance. Every silent gaze held between Hannibal and Bedelia carries a heavy subtext of curiosity, fear, and entrapment.

The visual that stayed with me the most was Bedelia sliding under the water in the bathtub, which then turned into a surrealist shot of her slowly sinking deeper and deeper into a bottomless black sea. Absolutely stunning!

These aspects are asÂ crucial to the show as the plot because we are meant to experience the story along with the characters. The ability to luxuriate in theÂ sights and soundsÂ forces the audience to not look away.Â This show demands your undivided attention. This is not a programÂ you watch while cleaning up around the house. Every abstract image and dense note is crucial to the viewing experience.

I could go on and on about the the cinematography and musical compositions for days, so let’s discuss the events of the episode. After assuming the identity of Dr. Fell, Hannibal and Bedelia make their way from Paris to Florence. While Hannibal has always been a main focus, Bedelia managed to take center stage. Her observations of Hannibal can easily take the place forÂ our observations. She knows what he does is wrong, but she’s too curious to look away. Seems fitting since we’reÂ watching a show about a man who murders and then eats people.

When the time comes to kill the intrusive Anthony, Hannibal challenges Bedelia (and us) to decide if we are observing or participating. There can be arguments for both sides, but Bedelia knows her involvement, or lack thereof has crossed the line. It’s clear that Bedelia is trying to find a way out without getting herself killed. Sitting in plain site, staring directing intoÂ security cameras is a smart way to draw attention because surely the FBI is looking for them.

Through a series of flashbacks, we witness Bedelia returning home to find Hannibal showering off the blood of Will, Alana, Jack, and Abigail. While pointing a gun at him, they calmly discuss how she’s interested in observing him more, and that she’s optimistic he won’t kill her.

More importantly, we see the aftermath of Bedelia killing the patient she mentioned last season. Was it self defense? I’m sure we’ll find out, but her acceptance of Hannibal’s help to spin the details in her favor set the course for the journey she’s on with him now. I also can’t wait to see how Zachary Quinto portrays this patient in more flashbacks to come.

We can’t forget about the black and white flashbacks to Hannibal’s dinner party with Abel. Although, it wasn’t much of a party considering Hannibal was trying to get Abel to eat his own dismembered parts. I wasn’t sure what the significance of these scenes were until the moment Abel proposed the same scenario to Hannibal.

Abel:Â “How will you feel when this all happens to you?”

Hannibal doesn’t answer, but it’s an interesting question. I doubt this food for thought will ever manifest itself into reality, but it could have a lasting effect on Hannibal’s thought process.

“Antipasto” didn’t start the season off with a bang, but like the title says, this is only the appetizer. We haven’t even gotten close to the main course, and this season is going to be quite the meal!

– As the promo suggests, Will, Alana, and Jack are alive. No doubt there will be physical scars, but what will their psychological ones be?

– Will Hannibal and Bedelia reach a breaking point?

– When will the fabulous Richard Armitage make his debut in the long awaited role of Francis Dolarhyde (aka The Tooth Fairy) from Thomas Harrisâ€™ Red Dragon?

Check out a sneak peek of what’s to come this season. The next episode is titled “Primavera.”

Dark Matter “Wish I Could Believe You”

Survivor’s Remorse “A Time to Punch”