History Channel takes “go big or go home” to heart starting Monday night with the kickoff of Texas Rising, a ten-hour (five-part) miniseries about the rise of the Texas Rangers after the fall of the Alamo in 1836.

It’s a pulls-no-punches gritty historical drama about the blood that was spilled all over the state while the Mexicans, Comanche, and Texas frontiersmen, and women, sorted out ownership. 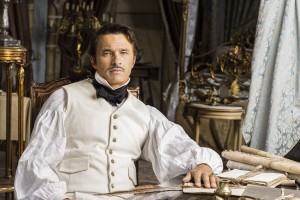 Here’s the formal logline: HISTORYâ€™s ten-hour television event series TEXAS RISING will detail the Texas Revolution and the rise of the legendary Texas Rangers. In 1836, west of the Mississippi was considered the Wild West and the Texas frontier was viewed as hell on earth. Crushed from the outside by Mexican armadas and attacked from within by ferocious Comanche tribes â€“ no one was safe. But this was a time of bravery, a time to die for what you believed in and a time to stand tall against the cruel rule of the Mexican General Santa Anna. The heroic General Sam Houston, the rag tag Rangers and the legendary “Yellow Rose of Texas,â€ lead this story of the human will to win against insurmountable odds. At the end, the Texas flags stood tall and victorious, claiming a piece of history for all eternity.

The Walking Dead Season Finale Preview: “Welcome To The Tombs” [VIDEO and PHOTOS]