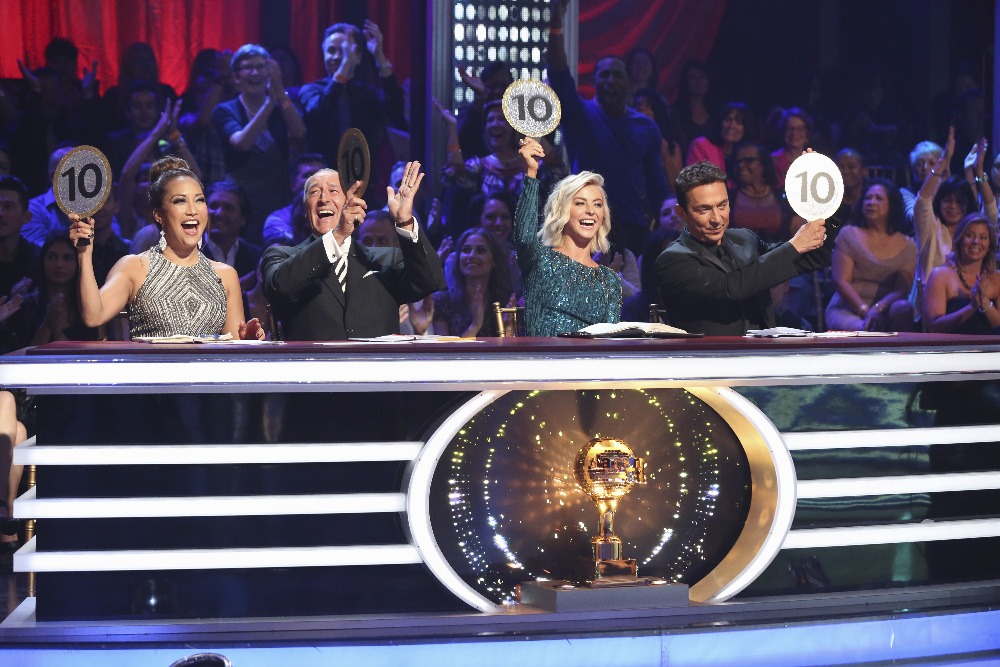 Itâ€™s been a crazy season and it all comes down to three dances (over two nights) and America. Itâ€™s been a tight race but everyone has their A game on! Who will win the Mirror Ball trophy? Hereâ€™s the breakdown of each couple:

It was improved but as Len said a little bit unsteady. Â I still think he is a winner but not a mirror ball winner.

They did their Disney themed danced which was excellent the first time. Â Len stood up and cheered! Â He doesnâ€™t do that! Â Riker & Allison nailed it!

This was the dance she did the first week. It was great then and it’s amazing now. As I said then, sheâ€™s in it to win it!

This was his best dance for sure! I think that Sharna is an incredible choreographer. I thought it was absolutely beautiful.

Total for both dances: 72

I thought it was a very fun routine and I liked that they mixed dance styles.

Not your typical Freestyle but as the judges said it is pure, raw and unbelievable! Sheâ€™s in it to win it.

Total for both dances: 80

Len: â€œYou might come from Hollywood Royalty but you have proved on your own merit you are dance royalty.â€

Erin: â€œSorry Redfoo, we are trying to do a finale.â€

This is the tightest final ever. Anyone can win this. It was an amazing night of dancing.

Everyone was back and doing dance numbers/performances — the typical finals stuff. Riker and Allison earned the encore dance.

Tom announced that Alfonso Ribeiro is the new host of Americaâ€™s Funniest Home Videos. Nice plug for another ABC show.

We got to see Amy Purdy and Noah dance together, which was inspiring.

There was a spoof of Die Hard called Dance Hard. John McClain seemed to approve. (If you donâ€™t know the reference, I just canâ€™t help you.)

One of my favorite parts: Hot male dancers, doing a Magic Mike routine. The show could have been over at that point.

Derek and Julianne Hough did a dance with Sia, which was amazing. (Where was Maddie from Dance Moms?)

I think it was hard for him but for the amount of time they had he did quite well.

Great job as usual. Iâ€™m not sure if I saw a misstep but I thought it was fantastic.

Since day one she has been absolutely incredible. Â And this was no different. Â Best dance of the night. Â She looks like a professional.

Patti LaBelle sings before the announcement of the 3rd place celebrity with video playing in the background featuring the finalists.

The 3rd place couple is: Noah and Sharna. I think that is what it should be. But the guy is a winner.

The winner of Season 20 is RUMER and VAL!!!!! America got it right! She was the best dancer and the coupling of Rumer with Val has been undeniable. Well done.

So another season has wrapped on Dancing with the Stars and it ended up being a great one. Now looking to the Fall and Season 21! Will Len be back or is he really leaving? Who will be the new crop of stars? What pros will be back?

See you back here for next season!

Dancing with the Stars comes back in the fall on ABC.

The Musketeers “Keep Your Friends Close”

The White Queen “The Final Battle”

Once Upon a Time “Enter the Dragon”