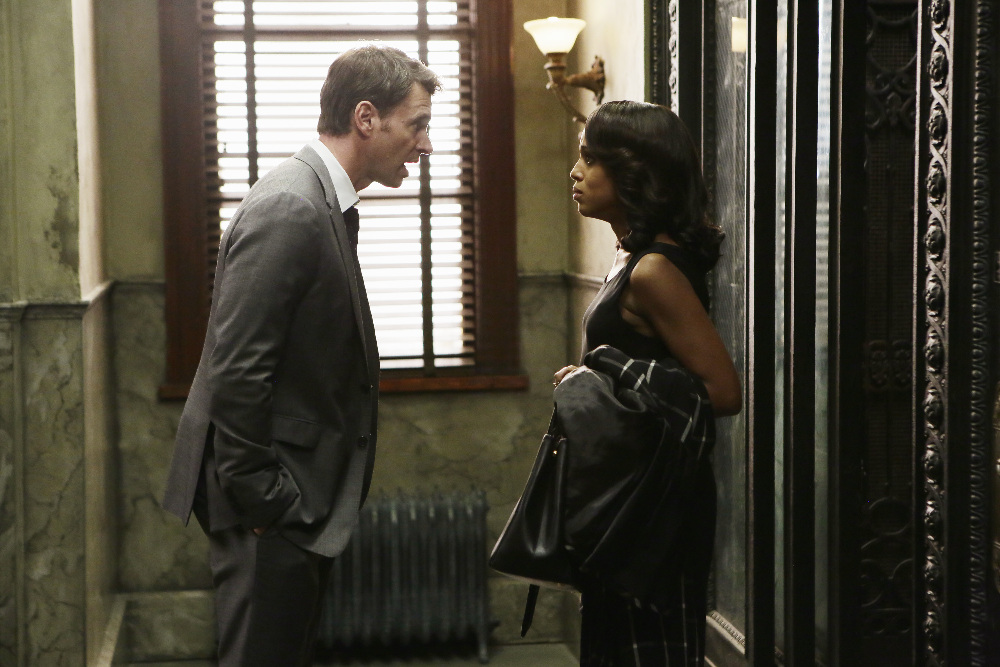 Everything, and I mean everything, has changed. The Season 4 finale of ABC’s Scandal actually feels like it could serve as a series finale.

Jake has said goodbye, Olivia and Fitz have found their way back to one another, Papa Pope has lost his power and Mellie is the next senator of Virginia. My head is spinning!

There are also just enough cliffhangers and changes to open up brand new storylines for a new season. Huck has been working for Papa Pope, and QuinnÂ has him at gunpoint. Cyrus is out, Fitz and Mellie have split up, and Liz looks a little too much like things are falling into place just like she planned.

Still, there are three standout moments from the finale. Letâ€™s break them down.

Something about this is incredibly poetic. No, he isnâ€™t in there because of all the murders heâ€™s committed (or ordered) or the torture or just being evil. Heâ€™s in there for embezzlement. Thatâ€™s right, the last little piece of B613 left after Oliviaâ€™s plan that went wrong is all that money, and that turns out to be all they need. Papa Pope is arrested in the museum, insisting that the police are about to make a huge mistake. They donâ€™t want to hear it and cuff him anyway. It isnâ€™t some big takedown with a high profile trial, and isnâ€™t even very dramatic. That has to be even more painful for him, because Eli would see this as being beneath him. What a kick to his pride.

Listen, Iâ€™ve been Team Olake for a while, but at a certain point, something has to give. Jake deserves better than to be with a woman who doesnâ€™t love him back, at least not as much as he loves her. And finally…finally…he realizes he doesnâ€™t want to be second choice.

Jake gives Olivia one last opportunity for them to run away together and leave it all behind, but instead, she develops another plan to deal withÂ her father. But once Command is behind bars and Olivia is back safe, Jake refuses to cross the threshold of her apartment.

Olivia and Fitz are reunited

What I said earlier about being Team Olake? Well, the change in Fitzâ€™s character this season has me reconsidering everything. Heâ€™s become, at least for me, a heck of a lot more likable than he used to be. Heâ€™s supported Mellie, heâ€™s been open-minded, and heâ€™s tried more than ever to do the right thing (okay, except for that whole going to war part). I actually found myself surprised by how happy I was to see Olivia and Fitz getting back together at the end of this episode.

Olivia is waiting for him on the balcony, and the look on his face is priceless. He looks surprised, happy, and hopeful.

Olivia: Whatever we want?

He sets down her glass of wine, and they take their time falling into a kiss while the camera pans out slowly to a view of their profiles at the top of The White House.

So, what does happen next? That last shot might suggest Olivia is going to be moving in, but the truth is, anything could happen. There are still so many questions, and so many parts of the story that are left wide open.

What did you think of the season finale of Scandal? And what do you hope to see next season? Share your thoughts in the comments in below!

Scandal will be back next fall on Thursdays at 9/8c on ABC.