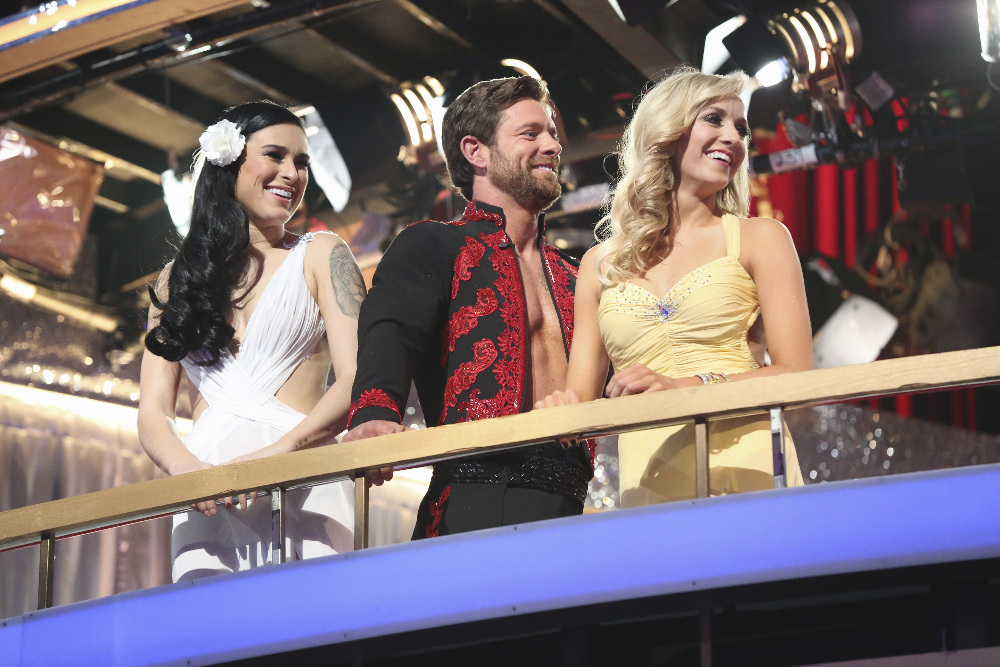 Itâ€™s the Semifinals! Â Itâ€™s the first time that I feel like anything can happen. Â Will the right people dance their way into the finals? Â Will everyone step up to the challenge? The judges have complete control over one of the dances and a coupleÂ are even incorporated into the performances. Hereâ€™s the breakdown of each couple:

A Fifty Shades of Gray inspired dance, it was better than the movie. It was a beautiful dance. Sheâ€™s in it to win it! I also love how her family has been so supportive of her.

It was nice. I think Sharna is an amazing choreographer and what she has done with Noah is something else. Should he move to the finals? I donâ€™t think so but good job with how far he has come.

But the big moment of the night: Noah proposes to his girlfriend and gets everyone to cry!

Itâ€™s not my favorite dance of Rikerâ€™s but it was nice. I think this guy is so talented. The judges loved it.

The Quickstep is my least favorite dance and they did incredible. Nastia has had some obstacles to overcome this season, with a new partner and having a bit of a meltdown. Fantastic. Sheâ€™s a pro.

They took a risk and it was wonderful.

Total for both dances: 68

Iâ€™m sure some are going to disagree with me and the guy did get engaged but I didnâ€™t love the dance. The concept was interesting. Maybe itâ€™s me. Again I think it is incredible what he has done but should he go to the finals over the other three couples?

Total for both dances: Â 66

Julianne actually not only helped them, she was part of the dance. I thought they did great and what I like about Riker is that he attacks every dance and knows how to put on a show.

Total for both dances: 70

First of all this was a special dance and, of course, beautiful. Derek did the dance but at the end Len came in and finished the dance. It was nice to see him on the dance the floor. It made me cry because it was so emotional, which is what Nastia needed.

Total for both dances: 70

Tom: â€œIf you are just tuning in, Iâ€™m not going to tell you what you missed but it was really cool.â€

Bruno: â€œGive the people what they want.â€

Bruno: â€œIf you donâ€™t get everyone in tears, Iâ€™m going to call you.â€

It’s time to find out who’s moving on to the finals. But before that happens…there’s talk about Noah’s big proposal and then the show focuses on Noah and Sharnaâ€™s night. Noah and Sharna are told they’re in jeopardy. Not a shock.

Emma and Sasha are challenged to put together a dance through the ages in two minutes. It shows just how versatile these pros are.

The pros talk about all the semifinalists and if they have a weakness. Val gets in a little dig saying that Nastia and Derek are so perfect that it almost makes them uninteresting. Ouch!

There were some other performances but, really, I just want to know who is advancing to the finals already! This is so stressful!!!

It comes down to three pairs: Noah and Sharna; Nastia and Derek; and Rumer and Val. The first couple that is safe Noah and Sharna. I donâ€™t feel good about it. The two strongest competitors are in the bottom two. How does that happen?

So now it comes down to Nastia and Derek or Rumer and Val:

Itâ€™s a shame that Nastia and Derek wonâ€™t be in the finals because they should be. Guess that’s why they say anything can happen.

Who do you guys think will go home with the Mirror Ball Trophy? Riker/Allison, Noah/Sharna or Rumer/Val? Share your thoughts below.

Next week Dancing with the Stars airs Monday and Tuesday at 8/7c on ABC.

Ryan And Mike Admit Their Faults, The Following "The Edge" and "A Simple Truth"

Finding Carter “Pilot” and “The Birds”

Dancing with the Stars “Season 18 Week 1”

Save or Slaughter, The White Queen “The Princes in the Tower”