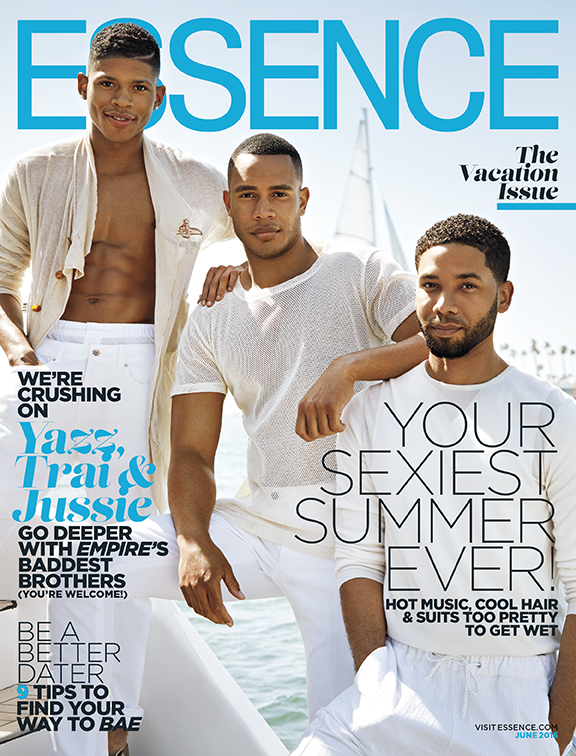 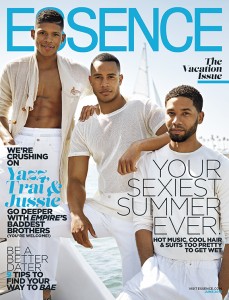 It’s definitely good to be a Lyon. That is if you’re one of the brothers on FOX’s smash hit series, Empire. This Friday, the actors who play the show’s three dysfunctional but super sexy siblings grace the front of a set of Essence magazine covers.

â€œIf I can help someone else feel less alone, no matter what theyâ€™re going through, Iâ€™m happy to have that opportunityâ€¦â€â€”Jussie Smollett, ESSENCE

THE LYON KINGSâ€¦This year, the world was introduced to FOXâ€™s runaway hit Empire and the Lyon familyâ€”led by a diabolical patriarch and a just-released ex-con matriarch. Season oneâ€™s finale left 16.7 million viewers hanging by a thread. Fans eagerly tuned in each week to watch the fictional Lyon brothersâ€”Trai Byers (Andre), Jussie Smollett (Jamal) and Bryshere â€œYazzâ€ Gray (Hakeem)â€”bear the weight of their parentsâ€™ sins while trying to carve out identities of their own. Weeks before filming began for the next season, ESSENCE chatted with TVâ€™s baddest brothers about life, art and success. ESSENCE’s June â€œVacation Issueâ€ hits newsstands on Friday, 5/15. For more on this monthâ€™s issueâ€”and all FOUR covers!â€”please visit ESSENCE.com.

The fact that Empire is the biggest show on TV should come as no surprise. What’s great to hear is that the show will be back and bigger than ever. At the recent FOX Upfronts it was announced that season two will consist of 18 episodes that will be doled out asÂ a nine-episode stint in the fall and another nine-episode stint in the spring. Guest starring in some of those episodes? Only Alicia Keys, Chris Rock and Lenny Kravitz. On top of that, Ne-Yo is on board to help write songs for the second season.

As for the Lyon brothers, let’s catch up season one-style: 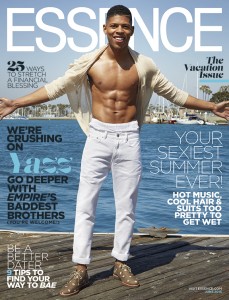 Hakeem actually showed some growth and maturity even while being inundatedÂ with lady troubles in the form of Naomi Campbell’s Camilla Marks and Serayah McNeill’s Tiana. And when he didn’t have a reluctant rivalry with his brother (Jamal) and an interfering father to deal with, he spent time in the studio creating hit songs. The cold shoulder he continually gave his mom, Cookie, was nearly a thing of the past by the end of the 12th episode. That was one of the most satisfying aspects to Empire‘s first season. 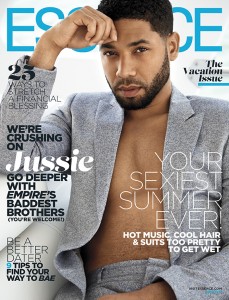 Who figured the brother that would be the most similar to daddy Lucious would be Jamal? The entire season the two were at odds because of Jamal’s sexuality. But when it came time for someone to step up andÂ take over the family business, it’s Jamal that Lucious trusted. Well, maybe trusted isn’t quite the word for it. But he showed he will do almost anything to make Empire succeed. He can also create some powerfullyÂ sexy and emotional hit songs. That’s another thingÂ Lucious could relate to big time. 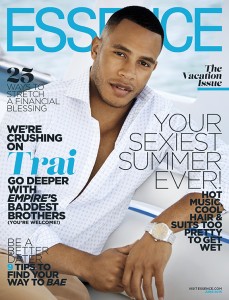 And finally, poor, poor Andre. Actually, it’s tough to feel bad for how messed up he is psychologically considering he made sure his dad went to jail for offing Bunky. It certainly wasn’t because he was interested in justice. He needed to get his dad out of the way. But the guy is bipolar. Plus, he’s the non-musically talented brother so he’ll never be thought of in the same light as Hakeem and Jamal. And, yes, his father also despises the fact that he’s married to a Caucasian woman. The guy has so many things working against him. Don’t know if he’ll ever get any respect around the Lyon mansion.

Can’t wait for the brotherly stories to continue. Empire returns this fall. UntilÂ then,Â you can catch all the Trai, Jussie and Bryshere hotness on the June issueÂ of Essence starting this Friday.

Ryan And Mike Admit Their Faults, The Following "The Edge" and "A Simple Truth"