What They Said: Favorite Quotes from Scandal “A Few Good Women” 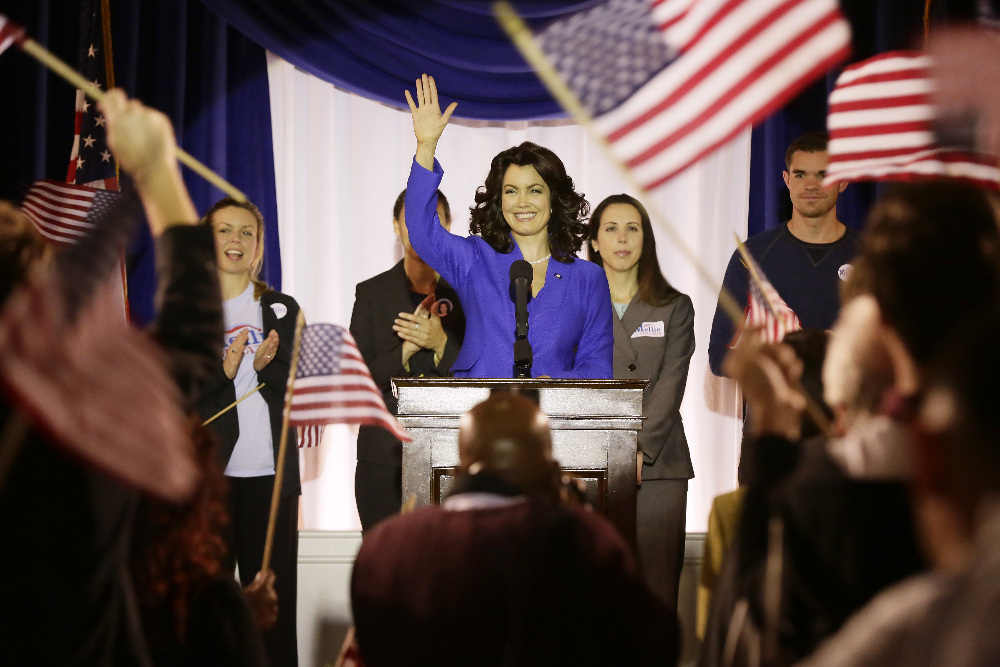 So what, exactly, is Foxtail?

InÂ â€œA Few Good Women,â€ we get a little closer to finding out what Papa Pope is up to. Huck and Quinn try to get answers out of Russell, and Jake even has his own encounter with him. Meanwhile, Mellie continues her run for senator, while Susan Ross goes to bat for a military woman who has been raped.

Jake: Hey, whatâ€™s going on with your friend? You know, the one who used my chest as a cutting board.
Olivia: Heâ€™s being taken care of. Itâ€™s being handled.

Quinn: Youâ€™re in amazing shape. Incredible core. I could work out every day all day and Iâ€™d never be in the kind of shape youâ€™re in â€“ I hate that about dudes.

Olivia: No one is going to kill you, Russell. I know that sounds comforting, but trust me, itâ€™s not. You donâ€™t get off so easily. You donâ€™t get to die. So if I were you, Iâ€™d start talking about Foxtail, because what these two are going to do it you is much worse than death.

Susan: I removed Ensign Martin from an unsafe situation.
Cyrus: On whose authority? The captain of Crazy Townâ€™s?

Abby: Jakeâ€™s sleeping at your place now?
Olivia: At least tell me which way the Oval is leaning.
Abby: So, youâ€™re back together with Jake?
Olivia: Heâ€™s just staying with me. Mellieâ€™s all over this, right? She â€¦
Abby: What about the guy that we really liked? The one with the abs. Russell? I was rooting for him. Whatâ€™s going on with him?
Olivia: Turns out heâ€™s not my type.

Olivia: Heâ€™s nothing like you.
Jake: A guy runs into you in a public place. It seems random. Casual. He flirts a little. And then what a surprise, you run into him again. Youâ€™d be bothered by the coincidence, except he says all the right things. Heâ€™s nice but with a bit of an arrogant edge, persistent but aloof. Itâ€™s all just enough to peak your interest.

Jake: The only difference is that Iâ€™m in love with you. Command would call that a defect. Russell does not have that defect. With Russell, Command built a better me.

Jake: Kill me once, shame on me. Kill me twiceâ€¦

Russell: He talks about you differently than he talks about the others
Jake: Yeah.
Russell: He misses you
Jake: Heâ€™s the closest thing to a father that Iâ€™ve ever had.

Jake: And the wine, the wine is just pretentious. All that cork smelling.
Russell: No, I like the wine. He has excellent taste in wine.

Jake: He has excellent taste in everything. Thatâ€™s the problem. Heâ€™s better at everything than everyone else.
Russell: Well, heâ€™s command and as we knowâ€¦
Russell and Jake together: You canâ€™t take command, son!

Russell: Okay, you can tie me back up now. Bring in crazy dude. Iâ€™m good to go.

Fitz: You wanna know what Liv would tell you to say? Or is that tooâ€¦
Mellie: Tell me.
Fitz: Sheâ€™d tell you to throw your husband under the bus.

What did you think of this weekâ€™s episode of Scandal? Share your thoughts in the comments below!

What They Said: Favorite Quotes from Scandal “Put a Ring on It”

What They Said: Favorite Quotes from Parks and Recreation “Doppelgangers”

What They Said: Favorite Quotes from Archer “Drift Problem”

What They Said: Favorite Quotes from The Vampire Diaries “Down the Rabbit Hole”

What They Said: Favorite Quotes from Scandal “Truth or Consequences”

What They Said: Favorite Quotes from The Vampire Diaries “All My Children”