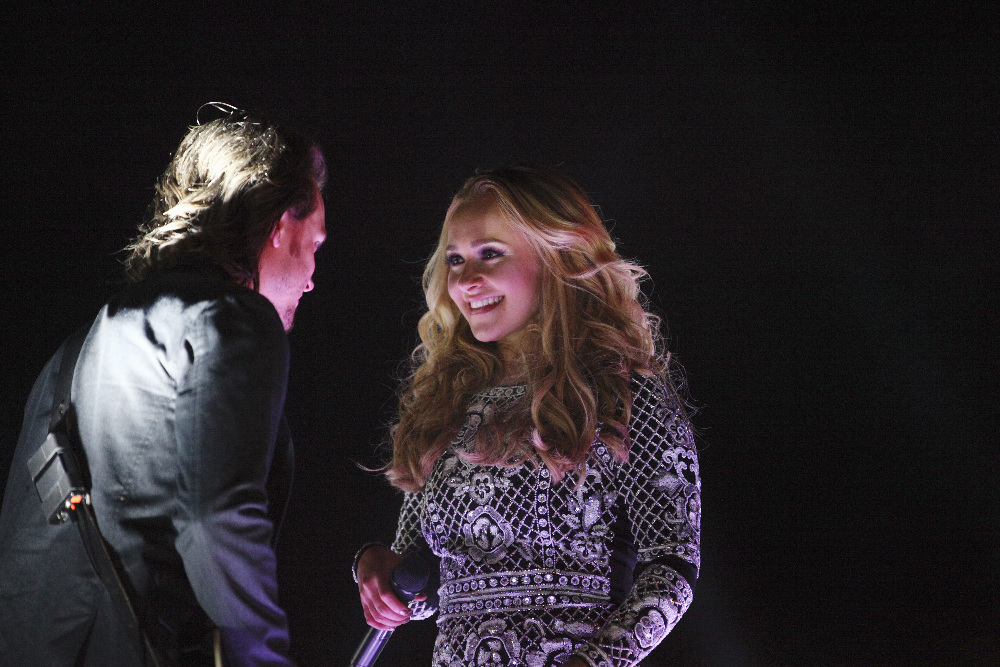 This week, some of Nashvilleâ€™s stars were on the road, but not on stage. Luke Wheeler finds himself inÂ Malibu with his new fling, pop diva Jade St. James (Christina Aguilera). Layla Grant and Jeff Fordham are there too. Layla has been playing on Jadeâ€™s tour dragging a reluctant Jeff with her. They all wind up at the same party where it looks like Luke and Jeff are feeling way out of place.

Rayna is off on a travel of her own. Deacon thinks sheâ€™s working on closing a deal out of state, but really sheâ€™s in Mississippi trying to convince Dekeâ€™s crazy narcissistic sister Beverly to agree to be a liver donor. Beverly is truly the most awful character on this show. She is so unbelievably selfish with very little self-awareness. The episode features several flashbacks to the early days when Bev and Deke were first in Music City together and a young Rayna locks eyes with Deacon across the room.

Beverly’s refusal doesn’t deter RaynaÂ who sticks around, showing up at a bar where Beverly performs. Time hasnâ€™t changed much for bitter Bev â€” sheâ€™s still singing the same tune decades later. And the jealousy she still harbors after all these years has clearly eaten her alive.

Rayna takes her advice in a way and decides to throw a little money at the problem since obviously Beverly canâ€™t be prevailed upon to love her brother more than herself. Rayna shows up the next day, and hands Bev a million dollar check. If that doesnâ€™t get poor Deacon a new liver, I donâ€™t know what will!

Meanwhile, clueless that any of this is happening down in Mississippi, Deacon walks into his house and finds Maddie and her boyfriend Colt (Lukeâ€™s son!) frantically putting their clothes back on. Itâ€™s the moment every parent dreads. Fortunately, things hadnâ€™t gotten very far and thank goodness their parents didnâ€™t get married! At some point, Deacon must have called Luke, and it was just the excuse he needed to get the heck out of LA. I guess this is the end of Jade and Lukeâ€™s fling! Iâ€™m glad because that storyline kinda creeped me out anyway.

Now that Avery has dropped out of the band, itâ€™s just Scarlett and Gunnar â€” â€œThe Xs.â€ After three months with no word, Kiley shows back up on Gunnarâ€™s doorstep looking for Micah. Gunnar goes off on Kiley and telling her to get off his porch and never come back before storming off to meet Scarlett to do some press for their duo.

When he finally comes home, Kiley is still there â€” with a shocking revelation of her own.

Iâ€™m not sure where this Kiley storyline is going next, but if Gunnar is serious about getting Scarlett back, he is going to have to pull it together. Heâ€™s such a hot head! I guess thatâ€™s ok because I am all about Dr. Caleb. Donâ€™t get sucked into Gunnarâ€™s drama, Scarlett!

Even though Avery has dropped out of his band, heâ€™s still got a gig as Julietteâ€™s guitarist and mama decides itâ€™s high time she get back to work. But promoters arenâ€™t buying Juliette right now so she takes matters into her own hands and stages a spontaneous rooftop concert announcing her return to music.

The stunt gets her a ton of publicity and a thrill sheâ€™s not had since becoming a mother. When she and Avery arrive home, things are heating up only to be interrupted by real life. The look on Julietteâ€™s face when the baby cried was heartbreaking and as theyâ€™ve been hinting for several episodes, Juliette seems to be dealing with a little more than just postpartum depression. Check out this sneak peak from the next episode:

And last â€” I have to mention Teddy Conrad and his embezzlement debacle. Natasha apparently felt bad about ratting out her favorite John and warns Teddy that the Feds are on to him. Teddy decides to skip town, writes letters to his girls and Rayna, but his run for the borderÂ is interrupted by a U.S. Attorney friend who offers him a way out of this mess –Â IF Teddy will do something for him. Will Teddy avoid prison for a second time? Until tonight I had forgotten about that whole mess in Season 1 with Peggy (who later married Teddy and then got murdered in Season 2!) and the Cumberland Deal.

Looking to next weekâ€™s episode, hopefully we will find out if a million bucks can make Beverly do the right thing for her brother. And maybe Avery can get to the bottom of whatâ€™s going on with Juliette while Gunnar and Scarlett (mostly Gunnar really!) try and navigate being a duo but not being â€œtogether.â€

Once Upon a Time "Mother"

There’s A Lot Going On When “Chloe Does Lucifer”