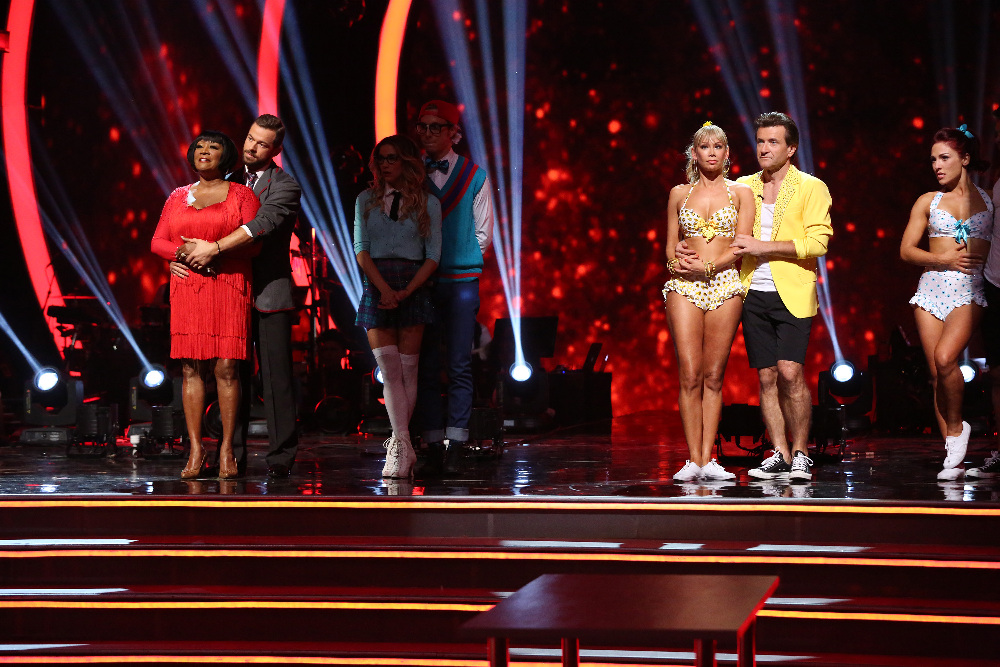 A show with a Spring Break theme and Team Dances. Will Derek keep his streak of never losing a Team challenge? As usual, someone was eliminated. But there was also an announcement: Next week there willÂ be two eliminations. How will this additional pressure affect the pairs? Â Hereâ€™s the breakdown of each couple:

Itâ€™s time for Team Dances! But first…who is safe and who is in jeopardy?

And the teams were tied. Technically Derekâ€™s streak is safe! The in jeopardy couples then go up to the walkway to find out their fates. First ones safe: Noah & Sharna and then Riker and Allison. It came down to Robert and Kim & Patti and Artem.

Patti and Artem were eliminated. Miss Patti went out with a bang!!!

Tom: â€œFor you Emmy voters, remember Peta in the of best use of an inflatable donut category.â€

Tom: â€œYou do have someone doing your taxes for you.â€

Robert: â€œThis is definitely not the end of the road for Kym and I.â€

Tom: â€œI think if weâ€™ve learned anything tonight we are stuck with those crab things all season.â€

Erin: â€œHave you ever met Max?â€

Tom: â€œSomeone is getting too lonely on the farm.â€

Next week is a double elimination! That is a lot of pressure. Who will go and who will stay? See you next time

Once Upon a Time "Sympathy for De Vil"