Once Upon a Time “Heart of Gold” 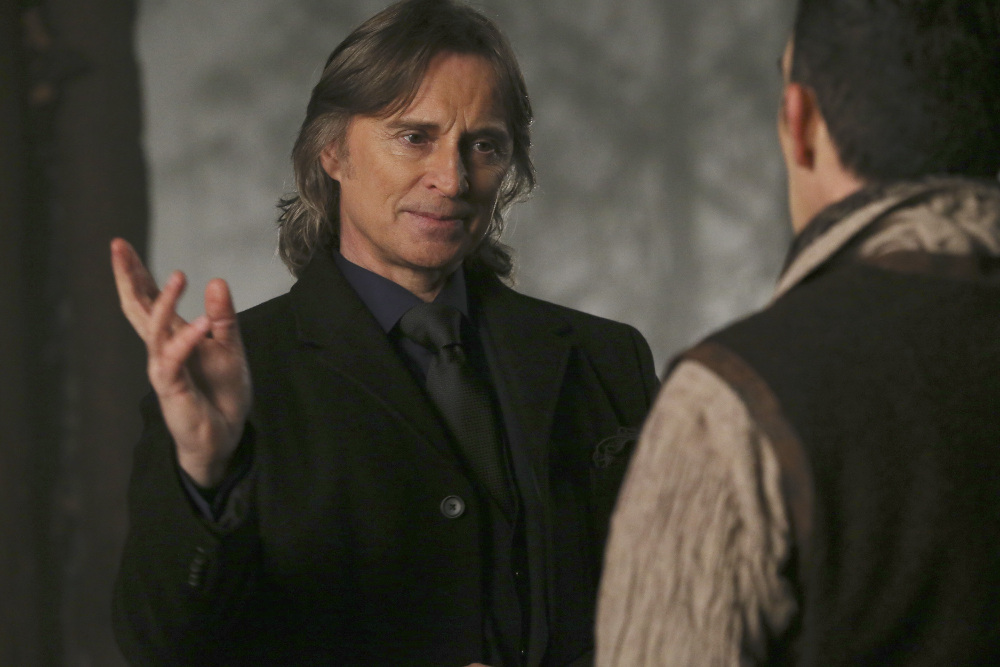 This week weâ€™re treated to arguably the biggest reveal of the season so far. And even with this major piece of news, thereâ€™s still so much left unsaid. So letâ€™s dig in to what we know.

Itâ€™s no big surprise that Gold has The Authorâ€™s quill. When he went back to his shop to â€œretrieve somethingâ€ it was a pretty fair guess that this was the item. So now Gold has The Author and the quill together in the same place for the first time since before Emma was born. Alarm bells are ringing, take heed Storybrooke!

Gold needs Regina and, as usual, heâ€™s willing to undo all the progress sheâ€™s made towards good in order to get his way. And undoing it seems remarkably easy where Robin Hood is concerned.

In the flashback to the Enchanted Forest, we are treated to a little of Robinâ€™s history. After marrying Marian he takes the path of the entrepreneur and opens a quaint little village pub. Unable to pay his bills, he takes a â€œjobâ€ for Rumplestiltskin to steal the Elixir of the Wounded Heart from Zelena the Wicked Witch from Oz. Along the way he meets Will Scarlet â€“ by dropping a portal on Scarletâ€™s captor, naturally â€“ and agrees to share the fruits of his heist with Will. Robin manages to get in and get some of the elixir, but not enough to share. He also manages to escape with the bow and arrow that never miss their target. No wonder Robin Hood was known as such a great marksman! On the way home, he allows Will to prey on his emotions and out of kindness Robin slips the vial into Willâ€™s belt before leaving Oz. No doubt we will one day see that there is more to this part of the story. When Robin gets back to the Enchanted Forest, he finally becomes the gentleman thief we all know and love.

So what does this have to do with Regina?

As it turns out, all the angst that Regina has suffered over the return of Marian and the ultimate departure of Robin from Storybrooke is just a tiny fraction of the true level of deceit. We learn this week that her torment is just beginning and there is a lot more pain to come. Back when Emma and Hook traveled to the past and rescued Marian, it turns out they had a stowaway along for the trip.

Zelena, who had allegedly just been killed in the jail cell, had actually survived and managed to go through the portal to the past. When Emma rescued Marian and planned to bring her to present-day Storybrooke, it was too good an opportunity for Zelena to pass up. She killed, yes KILLED Marian and took her place using the six-leaf clover charm from Oz. So all this suffering over Marianâ€™s return was actually just Zelena being supremely villainous like only a big sister could. Honestly, it’s a relief to find out that Marian wasn’t herself all this time. It has never sat well with me that she and Robin weren’t madly in love like they always were in the stories. He seemed to dismiss her too easily. Now we can believe that this is because he felt something off about her, not that he just grew tired of trying to make it work.

And what happens now? Robin is exiled with a doppelgÃ¤nger, poor little Roland is caught in the middle, and Regina is hell-bent on stopping her sister from stealing her happy ending.

So now I have to ask â€“ did Zelena talk the Snow Queen into serving â€œMarianâ€ the enchanted ice cream cone? It always seemed out of place that the Snow Queen would do that without doing it to anyone else. And after all, it did ultimately serve to get Robin away from Regina.

Also, has Rumplestiltskin now created the new currency of Storybrooke? Will he soon be trading in Happy Endings with his picture stamped on the back? There are a lot of people who would do quite literally ANYTHING for that particular currency.

And finally, we see Robin snatch a six-leaf clover charm too, do we dare to hope that heâ€™ll use it to catch Zelena in her lie? Secretly, Iâ€™m hoping it will be Roland who unmasks her. Kids see things adults donâ€™t, and maybe he noticed ages ago and just hasnâ€™t said anything yet. Wishful thinking? Probably.

What fun to see the Aladdinâ€™s Genie on the poster in the bus shelter! Sure, itâ€™s the â€œDisneyfiedâ€ version, but it will be fun to see how he turns out in live-action Storybrooke. I hope itâ€™s safe to assume that Sidney Glass is not Aladdinâ€™s genie, since he ended up as the Magic Mirror. Therefore, the Genie of the Lamp is hovering in the wings waiting to take center stage. Canâ€™t wait!

The Strain “The Third Rail”