Nashville “This Just Ainâ€™t a Good Day for Leavin'” 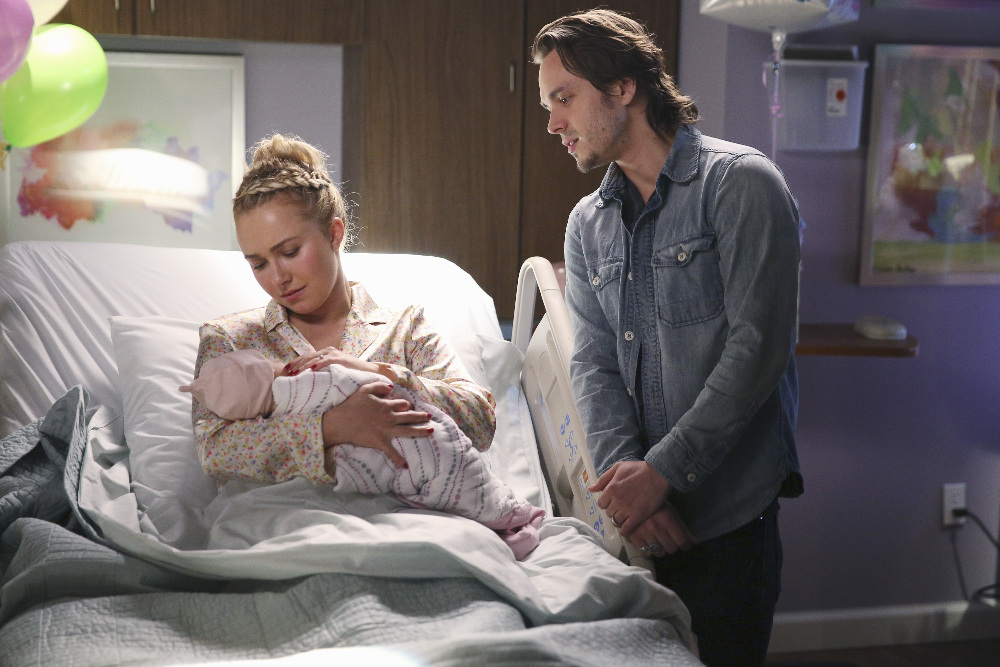 Last week, the parking garage shooting of Sadie Stoneâ€™s ex-husband left us all stunned and wondering what this would mean for poor Sadie who shot the bastard at point-blank range in the stomach when he tried to wrestle the gun away from her. This week, they got right to the point with Sadie being questioned in one holding room and Luke Wheeler in the other. And from the questions they were asking, it doesnâ€™t seem like the police think itâ€™s an open-and-shut self-defense.

In Chicago, Avery and Gunnar are loading up the bus and a sulking Gunnar isÂ mad because Scarlett seemingly spent the night elsewhere instead of with him. When Scarlett shows up, Gunnar is rude to her which is definitely one way to not impress the girl. Meanwhile, Averyâ€™s phone is blowing up because a very pregnant Juliette is having a hormonal breakdown on the morning of her baby shower. When her guests start dropping like flies, including hostess Rayna, Juliette throws a fit fit for a toddler and demands her people cancel the shower!

At Mayor Teddy Conradâ€™s house, Natashaâ€™s barrage of â€œblockedâ€ calls on her burner cell has Teddy looking in the mirror wondering how the heck he got in this mess.

Over at the police station, Sadie finally exercises her right to remain silent and reaches out to bestie Rayna, who rushes over with her lawyer in tow. Thatâ€™s when Rayna runs into Luke and itâ€™s gets little awkward. Meantime, Deke takes the Conrad girls to breakfast where Maddie goes super teenager, refuses to talk about the big C, andÂ later slams the door when Deacon tries to get her to open up. Behind closed doors, Maddie calls her other daddy (Teddy) whoâ€™s just received delivery of the dirt he ordered from the late-Lamarâ€™s goon. Heâ€™s a little mouthy to the mayor, and if I had a henchman, I would certainly demand more respect. But itâ€™s hard to respect a guy as skittish as Teddy. At least when Lamar was bustinâ€™ kneecaps, he did it with a smile. Get in the game, Teddy!

But I digress. Teddy then heads over to his nemesis Deaconâ€™s house and the two get into it on the front porchâ€”but when Deacon blurts out that he has cancer, Teddy softens and the two share a rare moment of dad kindness. As Teddy leaves Dekeâ€™s house after calming Maddie down, Natasha creeps up on him, pressing her need to get out of town with a bunch of cash. Teddy is about to crack, y’all!

Back at the police station, the press are swarming so when the police release a shaken Sadie, Rayna takes her back to Casa Jaymes to rest.Â  Then, Rayna heads over to Julietteâ€™s house to make a quick appearance at the baby shower. Itâ€™s barely midday, and already Raynaâ€™s had to tell her girls that Deacon could be dying, pick up her star artist/accused murderer from the police station, and then this:

Rayna has JUST. HAD. IT. Such a great scene!

On the tour bus, Gunnar is pouting, Scarlett is confused and Avery just pulled the emergency cord, jumped off the bus and caught a cab back to Music City to become a daddy! But that leaves only two Triple Xs for the show and those two have got a lot to work out. Gunnar tries to woo Scarlett with sweet on-stage sentiments.

The two can sure sing a beautiful duet but I think Gunnarâ€™s sappy manipulations may have backfired, which is fine by me, because I kinda love Dr. Caleb! Gunnar needs to pull it together. His whiningÂ is not attractive!

While Gunnar got the shaft, the third X, Avery, made it to the hospital JUST in time and he and Juliette welcomed a beautiful baby girl. In the hospital hall, Raynaâ€™s crazy day continued with a frantic â€œIâ€™m leaving townâ€ call from Sadie, who just found out that the policeÂ are not pressing charges. Before Sadie leaves, she stops by the studio to thank Luke, who apparently told the police he saw what happened in the parking garage and that it was self-defense. That little lie got Sadie off the hook and she hugs him with a tearful goodbye. Luke looks devastated (and so does Sadie for that matter) and I donâ€™t know if this is really goodbye for Sadie, but I hope not. A little fling between those two would liven things up!

The episode ends with a sweet cliffhanger â€“ instead of gunshots like last week, it ends with Juliette about to reveal their babyâ€™s name.

Next week, Christina Aguilera makes a guest appearance as pop diva â€œJade St. Johnâ€ who used to be engaged to Jeff Fordham! That should send Layla into a tizzy. The littleÂ preview indicates that Xtina’s character might have a thing for Luke Wheeler, too. This could be fun!

Outlander Preview: "By the Pricking of My Thumbs"

The Following “The Siege”

Lost Girl “End of a Line”