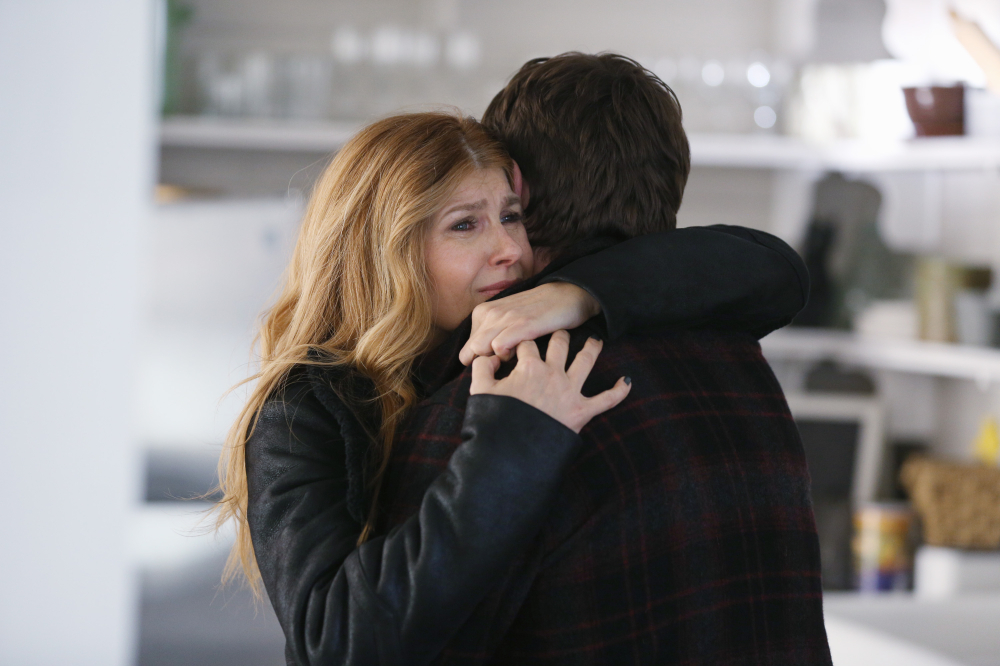 After a several week hiatus, Nashville came back with a bang. When we last saw Rayna and Deacon, he had just given her the cancer news, and Rayna was a wreck. We came back right where we left off, with a sobbing Rayna and Deacon trying to wrap their head around this new reality. The whole episode looks in on the two as they tread their way through the day, trying to make sense of their relationship in light of Dekeâ€™s diagnosis. At first, Deacon tries to push Rayna aside, saying that he canâ€™t be with her now that heâ€™s sick, that he canâ€™t drag her into the mess of facing his possible death. The two argue all day, to the point that Rayna starts bustinâ€™ up Deaconâ€™s guitar. Finally, Rayna gets through to him.

Finally, the moment #TeamDeacon has been waiting forâ€”the fated couple make sweet love by the fire!

Meanwhile the Triple Xs are on a tour bus headed to Chicago opening for Rascal Flatts. Last week, Gunnar seemed a little jealous of Scarlettâ€™s new love interest, Dr. Caleb McHottie (Dekeâ€™s oncologist). Well, this week, Gunnar could not keep from making puppy dog eyes at Scarlett, who seems oblivious to his attentions. She is just trying to hold it together because the last time she was on an arena stage in Chicago, she about had a nervous breakdown! On the bus, the three become Twitter-official and pretty soon theyâ€™ve got 5oo follows. And where there are followers, there are trolls. When Scarlett sees tweets about her previous onstage meltdown, she takes to the computerâ€”only to realize hours later that you canâ€™t reason with online haters. In an effort to pull Scarlett out of her self-inflicted Twitter funk, the three write it out and come up with a killer song.

This crowd loves it, and when they exit the stage, SURPRISE! Dr. Caleb is standing by having flown in to surprise Scarlett. Gunnar is SEETHING with jealousy and Avery tells him that if he wants Scarlett, he better make a move and fast. I love this Avery â€” heâ€™s all cute, married, dad-to-be Avery, instead of Drunk Avery.

But does Gunnar take Averyâ€™s advice? Well, sort of. Except it looks like heâ€™s about five minutes too late. When he opens the door to Scarlettâ€™s door, seemingly ready to declare himself, the room is empty. Cut to Caleb opening his hotel door to a smiling Scarlett.

Over in Layla land, Jeff Fordham, her lover/manager, sets up an interview with a blogger whoâ€™s an â€œold friend.â€ As it turns out, old friend in Jeffâ€™s world equals formerÂ lover and Layla does NOT like that at all. Jeff comes over later, tells her heâ€™d like to try and â€œmake it workâ€ (those three little words all women love to hear?). Layla lets him in and the two wind up in bed. But the next morning, Layla has an epiphany and walks away.

Jeffâ€™s best buddy and Nashvilleâ€™s favorite call-girl-entrapped mayor, Teddy Conrad, is about to lose control. Itâ€™s like heâ€™s conjuring up the ghost of Raynaâ€™s dead father, Lamar Wyatt! In fact, when this Natasha thing starts blowing up, he calls up his ex-father in-lawâ€™s goon to see how deep this investigation goes. Well, itâ€™s FBI deep and Natasha makes it clear she will save herself before Teddy, so if he wants her to disappear, she will need a few hundred thousand smackers to get lost. He doesnâ€™t have that kind of cash so he tries to hit up Jeff Fordham whoâ€™s got nothing to lose and basically tells him good luck with all that. Desperate for cash, Teddy tries to go full-Lamar and strong arm a city employee into helping him set up a â€œnon-restricted fundâ€ but that employee isnâ€™t playing. So Teddy calls Lamarâ€™s goon one more time, asking him to dig up dirt on that employee, I guess in an attempt to blackmail the dude into setting up the fund. Teddy just isnâ€™t badass enough to pull off these schemes but we will see if heâ€™s got what it takes to get the cash. Iâ€™m betting he ends up in cuffs before this season is over.

But the storyline of the night goes to Luke and Sadie. I thought there was a little spark between them a few episodes ago, and I was right. Sadie runs into Luke at the recording studio after flying back in from her Good Morning America revelation, and a little later hears him recording a heartbreaker of a song. The two talk for a bit, and she suggests the song needs another voice and the two turn it into a duet. Luke asks her to record it with him for his album and she wisely says that she better not (sisters before misters?) and he asks her to let him buy her a cup of coffee. The two open up and share, thereâ€™s the awkward hand-on-the-arm moment, and when they finally wrap up, she tells him thanks but she will walk herself out to her car.

You guys, parking garages at night are not cool. Just setting a scene in a parking garage is foreshadowing enough, but when the â€œPreviously on Nashvilleâ€ shows Sadie buying a gun, you know itâ€™s going down.

And it does. Her crazy ex is waiting for her by her car in the dark parking garage. Even though I knew it was coming, I was still shocked! Watch for yourself:

Thank God Luke showed up a few seconds later but what will become of poor Sadie? Is Pete dead (I kinda hope he is!)? Will this moment douse the spark between Luke and Sadie, or throw lighter fluid on it? The title of this episode, â€œI Canâ€™t Keep Away from You,â€ could not be more aptly named â€“ for every single character.